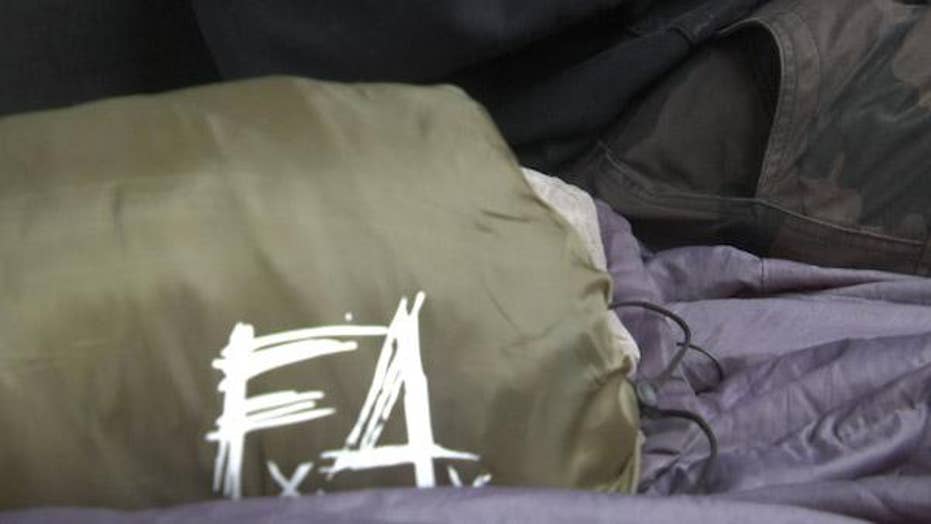 Two D.C. designers set out to help the homeless across the country through a sleeping bag challenge

Justin Debondt usually sleeps on the streets of Washington, D.C., wearing only his black hoodie. But it isn't enough, he said.

“I’m from Texas, so I’m not used to the cold,” Justin told Fox News.

But now Justin got a gift he said is more valuable than money.

"It’s a house. It’s a house away from a house,” Justin said while holding a sleeping bag.

Kendall Haley and his business partner, Daniel Wilson, are using their FADED Ambition brand to help the homeless by buying them sleeping bags. The two designers set up a GoFundMe page, which has helped them buy at least 100 sleeping bags.

D.C. Mayor Muriel E. Bowser has vowed to cut down on the city’s growing homeless population – the Census shows that in 2017 about 7,500 were homeless in the city, out of a population of nearly 694,000. But that hasn’t stopped homeless people from hitting the streets in growing numbers, even as frigid temperatures have gripped the area.

A Washington Post story said that despite a city-wide effort to revamp the city’s homeless shelters and transitional housing, the number of homeless people living on the streets appears to be growing – though precise numbers are hard to come by. The newspaper said last year there were about 897 sleeping on the streets of D.C., a jump from 318 the year before.

The designers say they realize their project only reaches several dozen homeless people in the city. And that it won’t solve the homeless problem. But, they said, any little bit helps.

FADED Ambition has raised more than $3,000 through a GoFundMe page, enough to buy another set of 100 waterproof sleeping bags, some of which have also been distributed in the New York-New Jersey area, Haley said.

In D.C., the partners say they’ve braved rain and snow to reach those who need a sleeping bag. Many have responded with appreciation. Dallas Sanderson was one of them.

“Not everybody who’s homeless…is a total lost cause,” Sanderson said. “I don’t do any hard drugs whatsoever. I don’t drink hard liquor.”

The designers even started a challenge urging famous singers and artists on social media to distribute a handful of their sleeping bags. So far, only Rapper Fatboy SSE has accepted the challenge.

But they said they are not giving up.

"We can do 100 challenges, if no one accepts the challenge, it’s not going to stop us from helping anyone,” Haley told Fox News. “The bigger picture is to help people and to spread awareness.”

For Sanderson, a one-time musician who dabbled in alcohol in cocaine and then became a frequent user, ending his career, he said the small gesture helps him. He stopped using drugs and drinking alcohol and has been trying to get back on his feet. But no matter how hard he tries, he said, he keeps ending up on the cold, lonely streets.

“It could mean the difference between me having a decent night’s sleep,” he said, referring to the sleeping bags, “and sleeping somewhere with nothing but my coat for a blanket.”