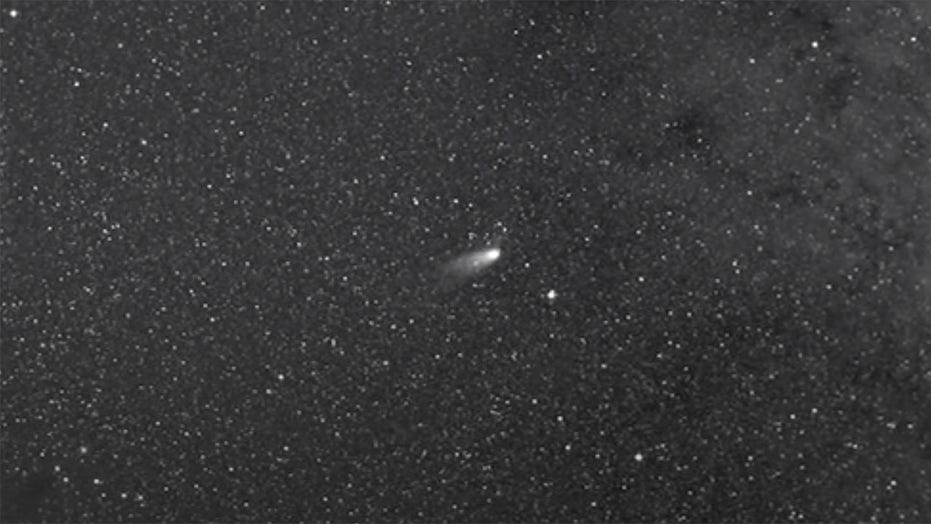 Interstellar comet will be passing near Earth

A pyramid-shaped 427-foot asteroid is set to whiz past Earth.

There’s definitely going to be a bright light in the sky this Christmas season.

A recently discovered comet flew past Earth over the weekend and is now headed back into the solar system. While it leaves, it will burn brightly in the night sky just in time for Christmas.

Comet Leonard can be seen in most parts of the United States as it burns away from Earth. The comet was discovered earlier this year by University of Arizona’s senior research specialist Gregory Leonard.

‘A BILTMORE CHRISTMAS': WATCH THE LARGEST HOME IN AMERICA TRANSFORM INTO A WINTER WONDERLAND

It’s been noted that the comet has actually started to burn a bit brighter. This is likely due to various pockets of gas and according to various sources, could signify that the comet is about the break apart.

According to Space.com, it may be tough to view Comet Leonard without a telescope or binoculars because of the comet's current whereabouts and the moon.

A variety of astronomers took to social media to share images of Leonard in the night sky.

The European Space Agency posted video of Leonard taken by the Solar Orbiter Heliospheric Imager. The footage shows the comet flying past the Milky Way Galaxy.

"The comet is currently on its inbound journey around the Sun with its tail streaking out behind," the ESA wrote. "When SoloHI recorded these images, the comet was approximately between the Sun and the spacecraft, with its gas and dust tails pointing towards the spacecraft. Toward the end of the image sequence, our view of both of the tails improves as the viewing angle at which we see the comet increases, and SoloHI gets a side-on view of the comet."