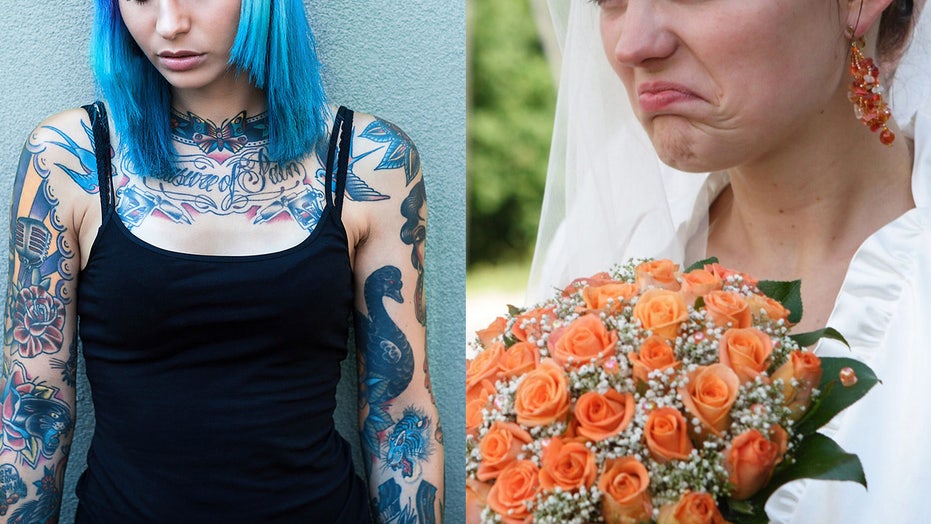 That’s no way to treat your wedding guests.

One cranky bride-to-be has allegedly demanded that one of her wedding guests totally change her appearance for her upcoming nuptials – or be disinvited – as the woman’s look “clashes” with the bridezilla's wedding day aesthetic.

The partygoer from Melbourne, Australia, recently voiced her woes in a private wedding-shaming Facebook group, The Sun reports. The author detailed that the mean-spirited bride recently asked her over text message if she would consider dying her blue hair to a “natural” shade and cover her tattooed arms for the mid-summer wedding.

One cranky bride-to-be has allegedly demanded that one of her wedding guests totally change her appearance for her upcoming nuptials, as the woman’s look “clashes” with the bridezilla's wedding day aesthetic. (iStock)

"So with my wedding, I wanted to ask if you could please make sure your tattoos are covered and could you maybe fix your hair up so it's a natural color?  We've put a lot of work into our theme and I'm sorry but your look clashes with it,” the engaged woman began. “Even if you just put some spray or something on your hair for the night.”

“I just want it to all look perfect and I can send you some ideas,” the bridezilla continued, offering that she could forward ideas for “nice long sleeve dresses” or a jacket. Alternatively, the bridezilla said that she made the same requests of another wedding guest, suggesting that the pair “could go shopping together.”

The guest, naturally, was taken aback by the request.

"Umm the wedding is in summer so I'm not sure I could wear a long sleeve dress or jacket? I'm really sensitive to heat so I just don't think I can do that if it's a hot day,” the partygoer replied.

She agreed to investigate hair dye sprays, but didn’t want to dye it altogether, as it took “a lot of work” to get it to the shade she wanted, the Sun reports.

The bride, meanwhile, wasn’t too happy with that answer.

"I know it's hot but it's my one day so if you can't suck it up, I feel like you don't really care about me or [the groom] and probably shouldn't come,” the bridezilla allegedly clapped back. “I'm not asking much and it's not my fault you get hot. Buy some makeup for your tattoos then if you want to be at my wedding, you'll figure it out.”

"If you turn up on the day without anything covered, you won't be let into the venue,” she claimed.

The shocked wedding guest fired back that tattoo-concealing makeup was “crazy expensive,” to which the bride snipped that the woman’s money issues weren’t her “problem.”

Though the blue-haired wedding guest wasn’t in the woman’s bridal party, the bold bride argued that the woman would “ruin” photos on the big day if she didn’t heed her style instructions.

Though the blue-haired wedding guest wasn’t in the woman’s bridal party, the bold bride argued that the woman would “ruin” photos on the big day if she didn’t heed her grooming instructions.   (iStock)

"It doesn't matter that you're not in the wedding party, you'll still be in photos and you will ruin them,” she reportedly said. “You're very pretty normally but your look doesn't work for my wedding and it is very fair to ask you to do something simple so that my day is perfect."

The unhappy wedding guest plans to approach the woman’s fiancé in two weeks to further discuss the matter, according to the Sun.