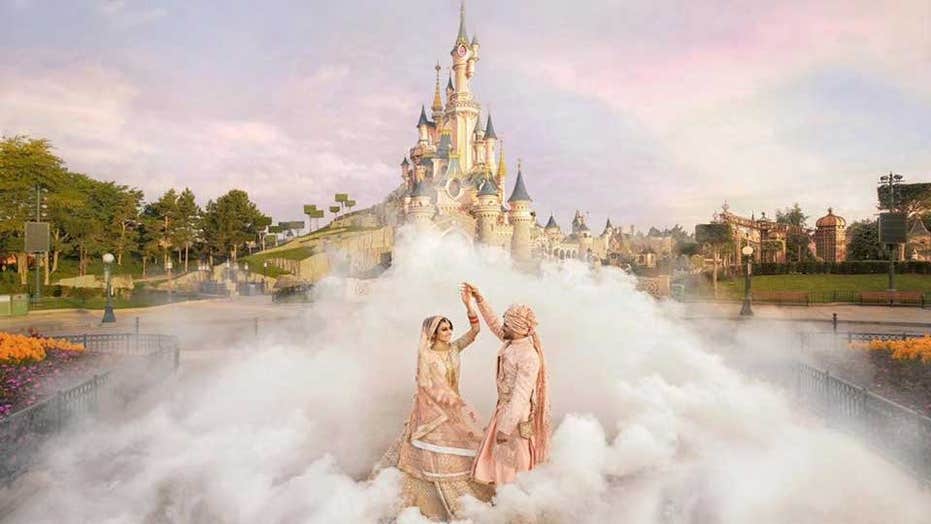 A couple exchanged vows in the first Bollywood-inspired wedding at Disneyland Paris — and even shared their first dance with Mickey and Minnie Mouse.

Varun Bhanot, 29, and Anisha Seth, 29, tied the knot in a spectacular two-day bash — which looked just like a Bollywood film — exchanging vows in a midnight ceremony outside the iconic Sleeping Beauty Castle in Disneyland Paris, and later having another Hindu ceremony by the theme park's lake.

The Disney-mad couple even shared their first dance with Mickey and Minnie Mouse, and Goofy was on hand, dancing to bhangra at the elaborate event.

Varun Bhanot, 29, and Anisha Seth, 29, tied the knot in a spectacular two-day bash that they hoped would feel like "Bollywood meets Disney." (SWNS)

Anisha, whose favorite Disney films are "Cinderella" and "The Lion King," described the day as their "happy ever after." The bride also wore four dresses, including a traditional white wedding gown, over the course of the couple's wedding weekend on Sept. 6 and 7.

“It was amazing but tiring, and I know our guests had a great time," she said. “I think it was definitely one of those things that you know has never been done."

She added that it truly was a "fairytale wedding," saying, "A lot of people coin the term ‘happy ever after,' but I think for us it definitely was on this occasion.”

The bride described the couple's special day as their "happy ever after." (SWNS)

The couple, who share a background in events organizing and also run a charity together, spent nearly a year planning the wedding.

“It was quite something, we wanted something really different," said Varun. “It was really quite magical. The idea was ‘Bollywood meets Disney.’”

After getting the idea for their lavish wedding, the couple, from London, visited Disneyland Paris for a reconnaissance trip on Valentine's Day to get an idea of what they wanted. (SWNS)

Varun proposed last year after whisking Anisha away on a helicopter ride, and popped the question with a crop circle in a field of wheat. The imaginative groom-to-be asked a farmer to write the message reading, ''Anisha, marry me?'' so it could be seen from the sky at a height of 200 feet.

After getting the idea for their lavish wedding, the couple, from London, visited Disneyland Paris for a reconnaissance trip on Valentine's Day.

The wedding was estimated to have cost tens of thousands of pounds, but the couple, who have been together for five years, said that Disneyland Paris chipped in to subsidize the event. (SWNS)

"People just enjoy the magic of the place," said Anisha, who works as an accountant. “When we went on the rides, it was nice to see all the children enjoying the Disney magic.”

Her husband said their families were surprised by the decision, but came around after he explained that destination weddings were becoming more popular.

“Paris is the city of love — that all played into the idea," said Varun, an internet entrepreneur. “We have been Disney fans for years, and we have organized big events together. We thought we would put our heads together and do something a bit different."

The Londoners said their family didn't understand their idea at first, but eventually warmed up to the idea of doing things "a bit different." (SWNS)

The wedding was estimated to have cost tens of thousands of pounds, but the couple, who have been together for five years, said that Disneyland Paris chipped in to subsidize the event. (Wedding packages at the resort are advertised on the Disneyland Paris website as costing between 32,000 euro ($35,000) and 55,000 euro ($60,000).

Whatever the cost, the wedding was seemingly worth the expense. Varun, whose favorite Disney film is "The Jungle Book," said the wedding didn't wrap up until very late — or rather, very early in the morning.