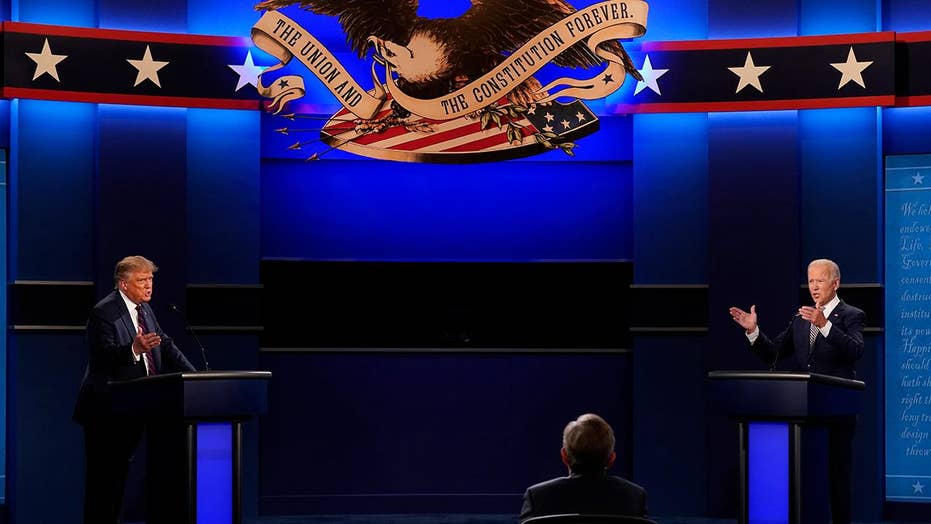 There was no shortage of wild interjections during Tuesday night’s first presidential debate between President Trump and Vice President Biden, and now Biden’s campaign has decided to go ahead and print one on a T-shirt.

The shirts, which are currently available at the Biden Victory Fund’s online site, feature the phrase “Will You Shut Up, Man” — a reference to a remark Biden made during one of the several times President Trump interrupted the former vice president over the course of the evening.

The shirt feature the phrase “Will You Shut Up, Man” emblazoned across a black-and-white image of Trump. (Store.JoeBiden.com)

The unisex shirts are currently selling for $30 to $33. The revenue from each purchase will be counted as a donation to the Biden Victory Fund.

The Hill further reported that the item had been made available for purchase even before the debate ended.

SEE IT: 'VOTE' BOOTS ARE TRENDING AHEAD OF THE 2020 ELECTION

Biden’s remark – “Will you shut up, man?” – was uttered by the candidate during an early section of the debate focused on the Supreme Court.

Moderator Chris Wallace of Fox News had asked Biden if he supported an end to the filibuster, and if he would expand and “pack” the Supreme Court with his own picks to fill any vacancies, should he be elected. But during Biden’s allotted time, Trump repeatedly interrupted, urging Biden to reveal whether he would “pack the court.”

“Will you shut up, man?” Biden replied. “This is… this is so unpresidential,” he added of Trump’s behavior.

Biden would later call Trump “the worst president American has ever had” during another of Trump’s interjections later in the debate.

A representative for Biden’s campaign was not immediately available to confirm when the "Will You Shut Up, Man" shirts went on sale, nor whether the Biden Victory Fund was planning to design additional apparel featuring other quotes from the debate.

The online shop currently features a range of clothing items and shirts, one of which reads “I paid more income taxes than Donald Trump.”