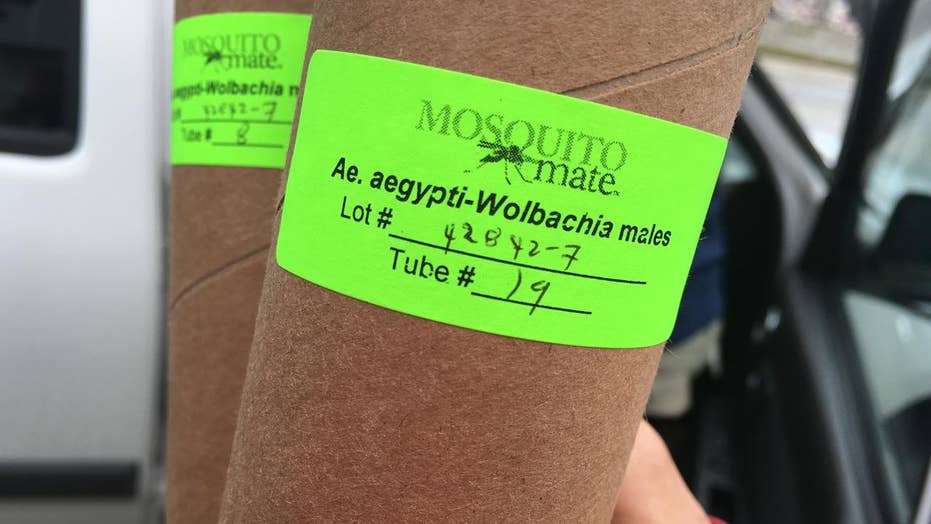 How Florida is preparing for mosquito season

Sterile mosquitoes are sent out to find mates

MONROE COUNTY, Fla. – The Florida Keys are flying in 40,000 mosquitos a week, to take their own buzzing vacations, of sorts.

Pruszynski is packing 20 of these tubes in her bag, all full of male mosquitos.

Twice a week, she walks a 10-acre test site on Stock Island (right next door to Key West)—part industrial, part residential—putting her mouth up to one end of the tube and then blowing the thousand mosquitos out into the air, to mix and mingle with the native mosquito population.

The males don’t bite humans, instead pursuing their one purpose:  finding a female with which to mate.

And this is where the “mad science” comes in.

The male mosquitos in the tubes come from Kentucky’s MosquitoMate laboratory, which has partnered with the University of Kentucky. In the lab, the males are fed a natural bacteria called wolbachia, which has the effect of sterilizing the males.

“That’s the key advantage with this trial.  The mosquitos have been fed the bacteria, they’re released and they do the rest. They go find a female, mate and the egg dies.”

So, logically, the local mosquito population should dramatically shrink over time.

Aedis Agypti females are the ones that have blood-lust for humans and are the mosquitos that bite you and can spread the devastating, and potentially deadly viruses of Zika, Dengue fever and Chikungunya.

SHOULD YOU STILL BE CONCERNED ABOUT ZIKA?

The 2016 Zika pandemic in the Western hemisphere infected more than 5,000 Americans, mostly travel related. Florida led the way with locally transmitted Zika cases, 217, prompting the governor to designate Miami Beach and the Wynwood neighborhood in Miami as active Zika zones. It’s most dangerous for pregnant women who get bitten by a Zika-carrying mosquito, as the Centers for Disease Control has concluded for babies it can lead to microcephaly, a severe birth defect.  The CDC still advises all pregnant women against traveling to Miami-Dade County.

In Southern California, this species of mosquito has infected more than 3,000 people with Dengue fever in the past three years, an issue that has also popped up in the Florida Keys over the years.

That’s why the Keys’ mosquito experts are eager to see how effective the tubes buzzing with thousands of lab-raised and bacteria-fed males will be in this 12-week experiment.

“People come to the Keys to fish, to boat, to be outside,” said Florida Keys Mosquito Control Commissioner Jill Cranney-Gage.  “If we didn’t have mosquito control, it would be miserable.  People wouldn’t live here.”

As for eradicating the Aedis Agypti mosquito population, Dr. Dobson says that’s most likely impossible, as winds will always blow in mosquitos from elsewhere.

Florida’s Governor, Rick Scott, and the state surgeon general, Dr. Celeste Philip, have already begun ramping up preparations for this summer, when the wet and humid season gets underway.  And no one wants another summer of Zika.