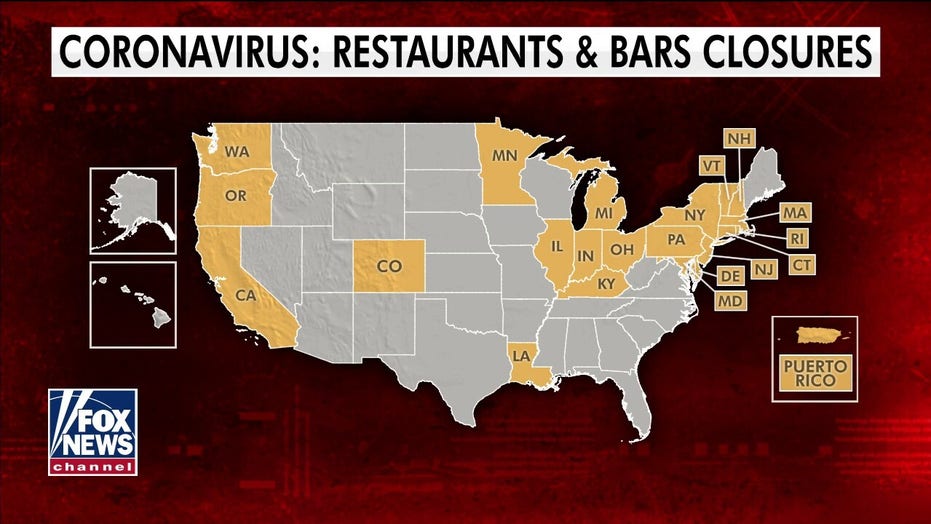 New York's new rules force every one of the 21,000 bars and restaurants in the five boroughs to stop serving in-house meals or drinks until further notice; Rick Leventhal reports from New York City.

On Monday, several counties in the California Bay Area announced shelter in place order that will begin to be enforced at midnight Tuesday and affect about seven million residents.

Officials in the area hope that the order helps prevent the spread of the coronavirus in the area, which the Los Angeles Times pointed out is the state’s hardest-hit area with 290 cases. It is the first of its kind in the U.S., according to reports and lasts until April 7.

WHO IS AFFECTED BY THE ORDER

WHAT DOES THE ORDER MEAN?

The Los Angeles Times reported that under the order, residents there will have to stay home unless they are traveling for essential needs. Local officials said residents will be able to venture out to buy food and other necessities.  They will also be able to buy gas and go to the bank. Residents will be able to patronize restaurants, but only to take food to go. BART will continue running. SFGate reported that residents are allowed to leave their homes, but should stay at least six feet away from others to avoid disease transmission.

"We intend to adhere to the spirit of what that's about in keeping people safe and keeping this virus from spreading," he said. The report said homeless are not subject to the order.

The Bay Area order tells people to work from home unless they provide essential services such as public safety, sanitation and medical services.

California’s national parks and state parks remained open, but many parks said they were shutting indoor spaces, including visitor centers and museums.