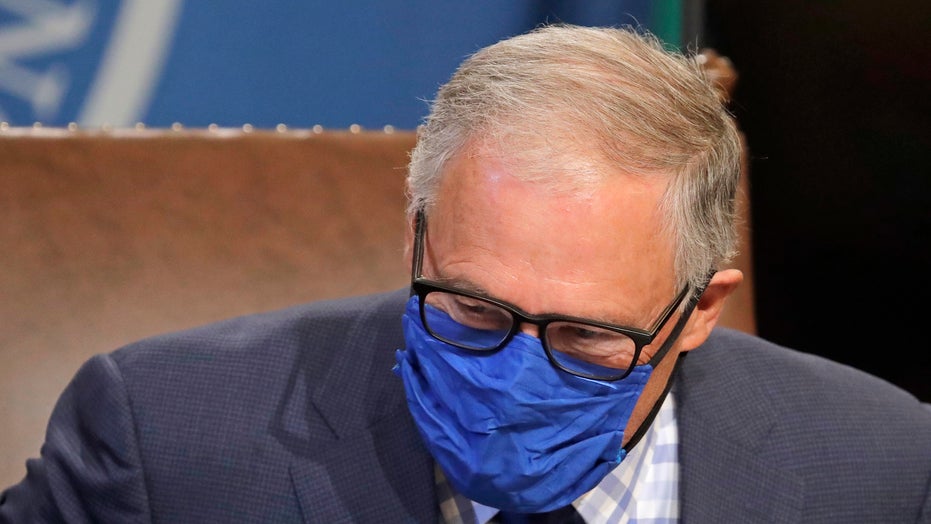 The legal requirement will take effect Friday and includes any indoor public space, as well as outdoor areas when social distancing measures can't be maintained. The order encompasses the entire state of Washington.

“As necessary economic activity increases and more people are out in their communities, it is imperative that we adopt further measures to protect all of us,” Inslee told reporters Tuesday. “Until a vaccine or cure is developed, this is going to be one of our best defenses.”

Washington Gov. Jay Inslee wears a face mask as he concludes a news conference at the Capitol in Olympia, June 23, 2020, . (Associated Press)

Scientists and health officials have urged the use of masks to limit the spread of COVID-19 and protect those more vulnerable to the virus, especially given how the virus can spread by people who don't have visible symptoms. While it has been recommended in the past, more states and cities have started to require face coverings amid a recent surge in cases.

The order follows an announcement Saturday of a mandatory mask proclamation for Washington's Yakima County starting this week, which was in response to reports of cases potentially overwhelming the county’s health care system. Businesses in the county were told they could not serve anyone who enters without a mask, among other measures.

Certain exemptions to the mandate include those with certain medical conditions and children under age 5.

Residents are allowed to remove their mask when eating at a restaurant, communicating with someone who is hard of hearing, or outdoors in public areas "provided that a distance of six feet is maintained from people who are not members of their household."

Inslee said the new rule won't exempt people of color after a county in Oregon was reported to allow non-white people to skip the mask requirement due to “heightened concerns about racial profiling and harassment."

“Given the ability to save somebody you love or even a stranger that you’ll never meet, we hope that on the scale of things to think about, that that will be tipping the scales towards [the] safety of everybody else around you,” he said, according to the Seattle Times.

He added that following the order could help reopen the economy sooner as areas progress through their phased reopening plans.

“Masking up is not just something that saves lives, it can save economies,” Inslee said. “If we don’t want to turn the dial back on phases in counties, we need every Washingtonian to join us in this effort.”

Washington state has seen more than 29,386 confirmed coronavirus cases and at least 1,284 deaths from the virus as of Wednesday morning, according to data from Johns Hopkins University.