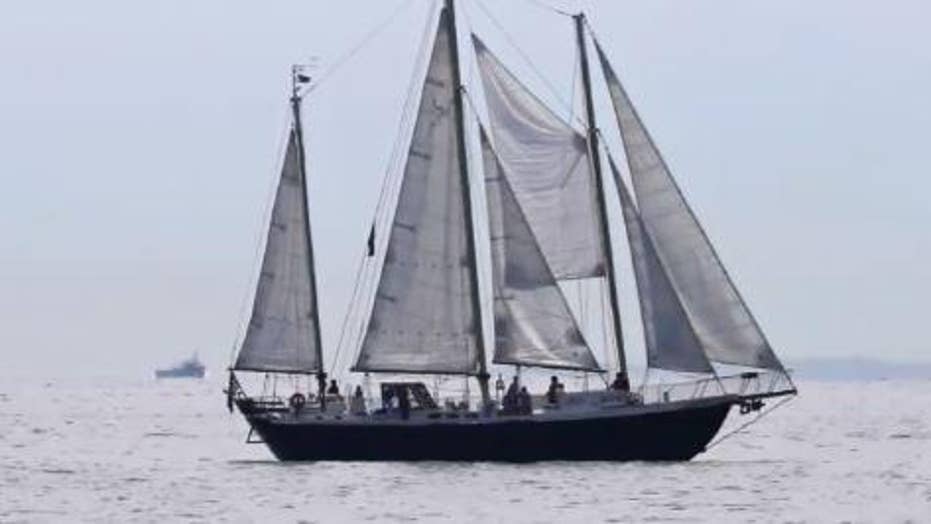 Flint, Michigan is no longer the only American city synonymous with contaminated drinking water. Recent reports show there are Flints in nearly every state. The cities and contaminants change, but the unease remains.

Cape Cod, with its quaint hamlets and salty breezes, is more closely associated with Camelot than contaminants. But the seaside escape has been gripped for decades by instances of seemingly unexplainable illnesses.

Within a span of three months, the U.S. government released two reports that called into question the safety of America’s drinking water.

In March 2018, the Department of Defense (DoD) provided a full list of military installations that have water near or around them that contain harmful levels of per- and polyfluoroalkyl substances or PFAS.

Dubbed “forever chemicals,” these man-made substances like plastic do not break down. They accumulate over time in the environment and some can linger in the human body for years.

PFAS can be found in the most mundane household products from nonstick cookware to microwave popcorn bags to dental floss. The chemicals are also one of the main ingredients in firefighting foam which explains their high presence on military bases.

The PFAS chemicals seep into soil and groundwater, contaminating them. A Centers for Disease Control and Prevention (CDC) sanctioned study found PFAS in 98 percent of the American population.

An internal White House email is quoted as saying, “The public, media, and Congressional reaction to these numbers is going to be huge. The impact to EPA and [the Defense Department] is going to be extremely painful. We (DoD and EPA) cannot seem to get ATSDR to realize the potential public relations nightmare this is going to be.”

However, long before Washington’s so-called “nightmare,” the specter of bad water brewed doubt in a popular coastal retreat.

“Higher Rates of Disease Trouble West Cape Cod” is a blazing headline from a 1986 edition of the New York Times. According to the article, a Massachusetts Department of Public Health study revealed that from 1979 to 1983, residents living in towns surrounding Otis Air National Guard Base and Camp Edwards Military Reservation—both considered parts of the current Joint Base Cape Cod—died of cancer at higher rates than other parts of the Cape or Massachusetts.

Families in two of those towns, Falmouth and Mashpee, were advised not to drink water from private wells as government evidence proved those wells contained carcinogenic contaminants believed to come from the military installations.

The state’s then Center for Health Promotion and Environmental Disease Prevention reported women were particularly at risk. It found that from 1979 to 1981, women living in the western part of the Cape contracted liver, bladder and kidney cancer more often than women elsewhere on the Cape.

“I don’t want people in my home drinking flame retardant that we know is carcinogenic."

Today, Cape Cod is still dealing with drinking water contamination. High levels of PFAS in the Hyannis water system prompted officials to publish temporary public health advisories twice since 2015. Under the advisory, pregnant and/or nursing women and infants were advised not to drink or cook with Hyannis water.

“It’s like living in a science fiction nightmare,” said Robert F. Kennedy, Jr. “In my own home I haven’t been able to drink the water for a couple of years. I have to tell my kids not to drink the tap water—they’re being raised on bottled water.”

Longtime Cape resident and president of the environmental organization Waterkeeper Alliance, Kennedy says people on the Cape are frightened.

“I don’t want people in my home drinking flame retardant that we know is carcinogenic,” Kennedy said.

PFAS chemicals were found in groundwater and soil on and near Joint Base Cape Cod, Barnstable Municipal Airport and Barnstable County Fire and Rescue Training Academy in Hyannis. Firefighting exercises are done at all three.

“People need to speak out. They need to complain to their elected officials and their regulatory agencies,” said Kennedy.

On January 16, 2019, Massachusetts residents, including town leaders from the Cape, turned out in droves to the public PFAS Petition meeting held at the Massachusetts Department of Environmental Protection’s (MassDEP) Boston office.

The petition posed by the Conservative Law Foundation (CLF) and the Toxics Action Center (TAC) sought to establish a drinking water standard for PFAS chemicals.

“To truly ensure public health, PFASs should be regulated as a class,” said Sue Phelan, director of GreenCape, an environmental advocacy group based in West Barnstable on the Cape.

“A heavy burden falls on communities like Hyannis that have already been exposed to PFAS for decades already.”

The EPA estimates the PFAS class to be made up of 5,000 chemicals. Phelan believes regulating each chemical individually will only prolong exposure.

“A heavy burden falls on communities like Hyannis that have already been exposed to PFAS for decades already,” said Phelan.

“AFFF [firefighting] foams contain possibly up to 40 different PFASs and that is the source of contamination in my community,” said Phelan.

In the absence of federal regulation for PFAS, states have established their own rules. In September 2018, New Jersey became the first state to adopt enforceable standards for perfluorononanoic acid (PFNA) a chemical in the PFAS class. A Maximum Contaminant Level (MCL) of 13 parts per trillion (ppt) was set for New Jersey drinking water.

In May 2016, the EPA set a health advisory of 70 ppt for PFOA and PFOS in drinking water. That advisory was much lower than the provisional combined level of 600 ppt. But EPA health advisories are not enforceable. However, water supplies like Hyannis fell out of compliance under this new recommendation. In June 2018, MassDEP issued a similar public health guideline of 70 ppt for 5 of the roughly 5000 PFAS chemicals.

Many attendees of the meeting expressed hope that MassDEP will establish a Maximum Contaminant Level (MCL) of 1 part per trillion (ppt) for the entire PFAS class of chemicals.

Kristen Mello, a resident of Westfield, Massachusetts, an area with wells contaminated from Barnes Air National Guard Base firefighting foam, has met with MassDEP officials several times concerning regulating PFAS as a single class of chemicals.

“We are sick. We need help,” said Mello who, along with her neighbors, has experienced negative health effects she attributes to PFAS contamination.

“When they turned the wells off in 2016 what was coming out of my tap was more than 500 parts per trillion PFOS. I’m constantly battling pneumonias. I have masses in my abdomen that keep me from being able to eat. We need a big state response.”

Westfield is one of five Massachusetts towns, along with Cape locations Hyannis and Lakeside Estates in Mashpee, that MassDEP lists as having a public water supply contaminated by PFAS with AFFF (firefighting foam) appearing to be the primary source.

Dan Santos is director of public works for the town of Barnstable. Hyannis is a village within Barnstable and as such, Santos is responsible for its water supply. He agrees that a Maximum Contaminant Level (MCL) should be instituted for PFAS when suitable. However, he sees a problem with regulators suddenly lowering the admissible standard.

“With the level so low and with the ubiquitous nature of PFASs in our environment I’m not sure there’s any water supply that’s not going to have PFAS in it,” said Santos.

The widespread use of these chemicals in the United States since the 1940s has led to their discovery in more than 98 percent of Americans, according to  the EPA and the National Center for Biotechnology Information (NCBI).

Santos is concerned that a dramatic reduction in what is considered acceptable could force him to shut off the water—again.

In 2016, Santos had to make a quick decision. When the EPA issued its dramatically lower PFAS health advisory, the Hyannis water system was out of compliance for the advisable limit of PFAS chemicals in its drinking water. Santos had to decide whether to keep the water running. Since the EPA’s health advisory is not enforceable, Barnstable would have been within its rights to maintain water use. As a precaution, Santos chose to shut off wells. This is a situation he would like to avoid.

Cape Cod is a designated sole source aquifer. This makes contamination of any kind especially hazardous to public health. The water Cape Cod residents drink is quite literally beneath their feet. Cape Cod has no alternative drinking water source.

Santos points to a main source of contamination on the Cape—a firefighter training area. He believes the state needs to end training and clean up the site.

“That site continues to contaminate the public water supply every single day from rainwater and from the water they apply to train,” said Santos.

When it comes to Massachusetts as a whole, residents are waiting to see if state officials will decide to regulate PFAS as one class of chemicals.

MassDEP expects to respond to petitioners by January 28, 2019.