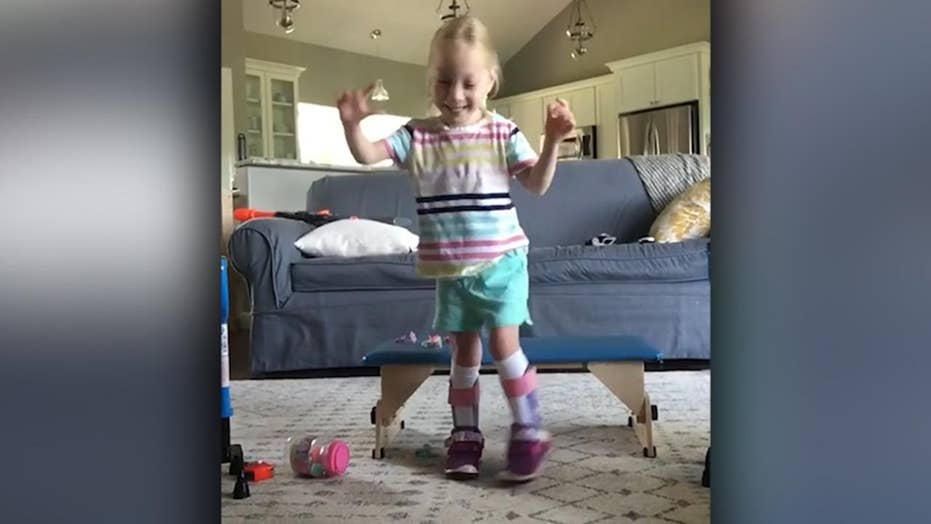 Raw video: Ecstatic little girl with cerebral palsy walks for first time on her own after undergoing major spinal procedure.

An inspiring video of a 4-year-old girl beating the odds to take her first steps less than two months after a life-changing spinal surgery has reached the hearts of millions.

“I’m walking!” Maya Tisdale, who was diagnosed with cerebral palsy at age 2, said after her first steps. “I’m walking! Yes! I even took a big step.”

The Michigan girl traveled to St. Louis in March to undergo selective dorsal rhizotomy, which doctors predicted would allow her to walk independently for the first time after undergoing extensive physical therapy. The predicted timeline was around six months, but on July 1, about seven weeks post-surgery, Maya took her first steps.

“First steps – 4 years, 10 months I can’t even put into words how we are feeling,” a post on the “Mighty Miss Maya – Will to Walk” Facebook page said. “Nothing seems to fit the enormity of this moment for us. We are beyond proud of our Mighty Girl. #sdrchangeslives #beemighty #impossibleisnothing #firststeps.”

Maya was born several months early and weighed 1 lbs., 10 oz. According to the family’s YouCaring page, she spent the first 87 days of her life in the hospital’s NICU before being sent home. Her mother, Ann Tisdale, noticed that the youngest of the family’s three children had tightness in her legs and was skipping typical infant milestones.

Maya was diagnosed with spastic diplegia cerebral palsy more than two years ago.

Spastic diplegia is one of nine different types of cerebral palsy and affects both the arms and legs, according to Cerebral Palsy Guidance. Physical therapy can help loosen muscles but, depending on the severity, some children may never walk and others may need a walker, braces or other forms of mobility assistance.

Despite needing a walker, the family said Maya continued to keep up with her older brothers and practiced her balance and other therapies on her own outside of the required therapies.

Her family raised funds for the March 27 surgery, which took place at St. Louis Children’s Hospital, with T-shirts and crowdfunding sites, and have kept supporters updated on her progress on their Facebook page.

“Maya still has CP,” Ann Tisdale told ABC News. “She still has the damage in her brain and she still has some tightness in her legs. … She’s going to continue with physical therapy five days a week, just like we’ve been doing, and get stronger and practice her skill of walking. But to just have those first steps and knowing that it’s possible is so great for her and our family.”