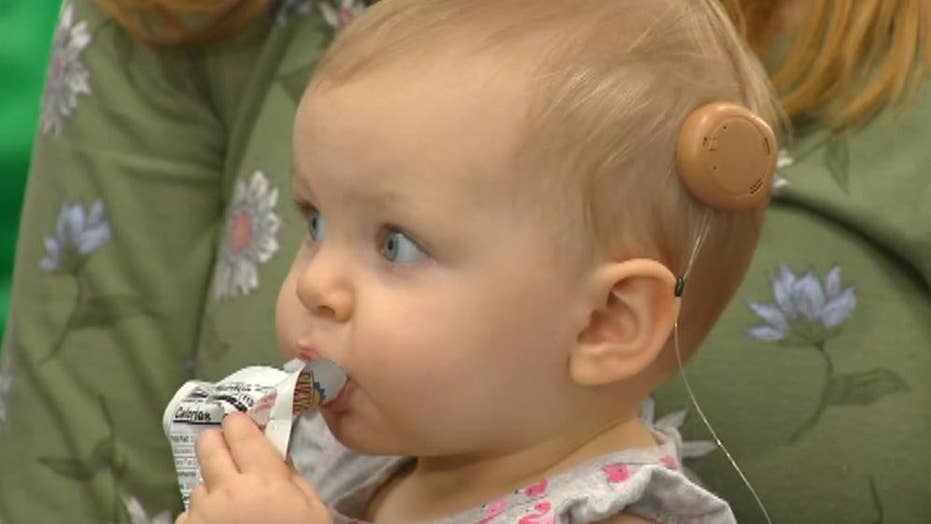 Texas toddler hears for the first time with the help of a cochlear implant.

Parents Anna and Will Esler witnessed a truly "miracle moment" when they watched their 1-year-old daughter, Ayla, experience the joy of sound for the first time.

The Texas toddler went viral after Cook Children’s Hospital in Fort Worth shared the heartwarming video of the toddler on Facebook last week, garnering more than 100,000 views as of Thursday evening.

Ayla's parents feared their daughter might never hear or speak after she failed her newborn hearing test twice.

“It was determined that she had profound hearing loss," Anna told Fox 4.

After receiving the devastating test results, the parents researched tools to help the tot cope. Their search led them to a little device that could change their daughter’s life: a cochlear implant.

“We like to have kids early because when we do that, we find that those kids aren't delayed in speech, language, and learning and they compete with all their other hearing peers,” audiologist Lisa Christensen told the news station.

Following surgery, the family’s journey came to a climax when the devices were turned on for the first time, putting a grin on Ayla's face as her ears were filled with the beauty of sound.

Anna was quickly brought to tears as she held her daughter, knowing Alya would now be able to speak, hear and experience all life has to offer.

“Every child responds differently when their cochlear implants (CIs) are activated, and so we didn’t know what kind of reaction she would have. And even though I knew it would work, there was still some doubt in my mind, so when I saw her responding to sound I was overwhelmed by thankfulness to God and to everyone else who has been a part of this journey,” Anna said in a statement online.

While there will be challenges ahead for the Eslers as Ayla begins to learn the basics of hearing, the family is thankful to see their daughter happy, dancing and responding to sound.

“There was a year of no hearing,” Anna said. “No sound input. So she'll be behind for a while but she's a smart girl, and we know she can do this; we're excited.”

These seemingly small devices have truly "flipped the switch" on Ayla’s future.

According to the American Academy of Audiology, children who have received cochlear implants at a young age "demonstrated improvement in sound detection and in their auditory perception skills following implantation.”