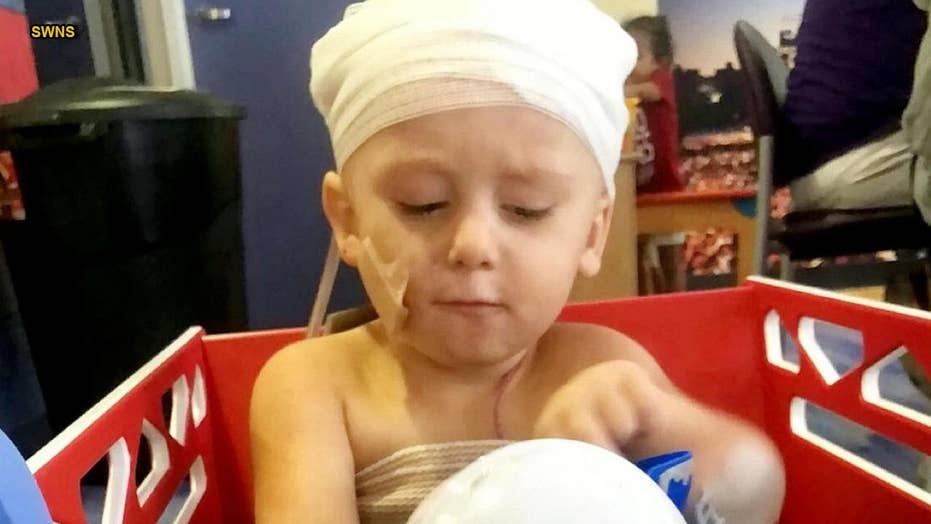 A 2-year-old Texas boy had his scalp partially ripped off after a family friend accidentally reversed over him in his parents' driveway.

A toddler is lucky to be alive after he was dragged for 35 feet beneath a reversing car while playing outside his home and was partially scalped.

Sage Wilson, 2, was seriously injured when a large portion of his scalp was ripped off as a family friend accidentally drove over him in her Volkswagen Jetta.

Mom Jamie Wilson, 29, was watching the tot and her other children play on a swing set in their front yard with her friend when she went inside to use the bathroom.

In the five minutes Wilson was away, the friend decided to leave and reversed over Sage, pulling him along the road for 35 feet before driving off without realizing.

Assembly worker Wilson was horrified when she came outside to find a screaming Sage - who must have wandered into the driveway - covered in blood with his skull exposed on the left side.

She bundled the kids into the car and got the attention of her husband, electrical supervisor Blake Wilson, 28, who was inside the house, by honking the horn.

While rushing to the hospital, the parents were advised by emergency services to pull over and wait for an ambulance, which transferred Sage to an emergency helicopter.

Sage's mom Jamie Wilson, 29, had been watching the toddler and her other children Pepper, 5, and Parslee, 4, play on their swing set with her friend when she went inside to use the bathroom. (SWNS)

The tot was airlifted to Cook Children’s Hospital in Fort Worth, Texas, where he underwent emergency surgery to treat his gruesome wound and a skull fracture.

Since the accident on Sept. 27, Sage has undergone three surgeries, including one to cut a portion of his skull which had gravel embedded in it.

Sage has also undergone a graft which transplanted skin from one side of his scalp to the other, but is scarred for life and will never grow hair on that part of his head again.

"There was blood everywhere and the skin had been completely pulled off a part of the left side of his head, so much so that I could see a large part of his skull," Wilson said. "I screamed when I saw Sage’s injuries. I put everyone into the car and immediately began to honk the horn and screaming to get the attention of my husband. We rushed towards the hospital in the car but 911 told us to pull over and wait for the ambulance."

"He was conscious in the car but everything was covered in blood," she said. "My mom had to fly with him in the air ambulance because I needed to calm down. I was too panicked. When I gathered myself and got to the hospital the doctors said they urgently needed to get him into surgery to remove the gravel and debris from his skull and wound. They were pushing on his brain."

"They said he was lucky because if a rock had hit a major blood vessel the situation would have been so much worse," she said. "He went into surgery for three hours and they cleaned out his wound. On Oct., 4 he had a skin graft from one side of his head to the other to help close the wound. He will never grow hair on those parts of his head again. He also fractured the back of his skull."

After two weeks in the hospital, Sage returned home with this family on Oct. 9, but he faces years of further surgeries to correct his injuries and could be scarred for life.

Sage was flown to the hospital and underwent immediate surgery to treat his wounds and skull fracture. (SWNS)

The toddler currently has to wear a wound vac 24 hours a day, a device which will help his would heal cleanly.

Wilson, who is also mom to son Pepper, 5, and daughter Parslee, 4, said: "He will have to have a few more surgeries in the next year and then after that."

"I do feel that it could have been so much worse. He is a little miracle," she said. "He’s in high spirits despite everything he’s been through. He doesn’t understand what has happened."

Despite Sage’s horror injuries, Wilson said she doesn’t blame her pal - who she doesn't wish to name - for the accident.

"After my son had gotten the helicopter I text my friend to tell her she had run him over, she had no idea," she said. "It was a complete accident and I know that. We are still friends. She feels terrible."

"Don’t ever take your eyes off your children when they’re outside because things like this can happen in an instant," Wilson said. "I will always pay attention from now on."

Sage, pictured before the accident, will never grow hair back on the injured parts of his skull and has already undergone three surgeries since the Sept. 27 accident.  (SWNS)

Grayson County Sheriff's office who attended to the scene confirmed that they have deemed the incident an accident.

"After attending the scene we have ruled this incident as an unfortunate accident and there is no follow up scheduled," Lieutenant John Holloway said.