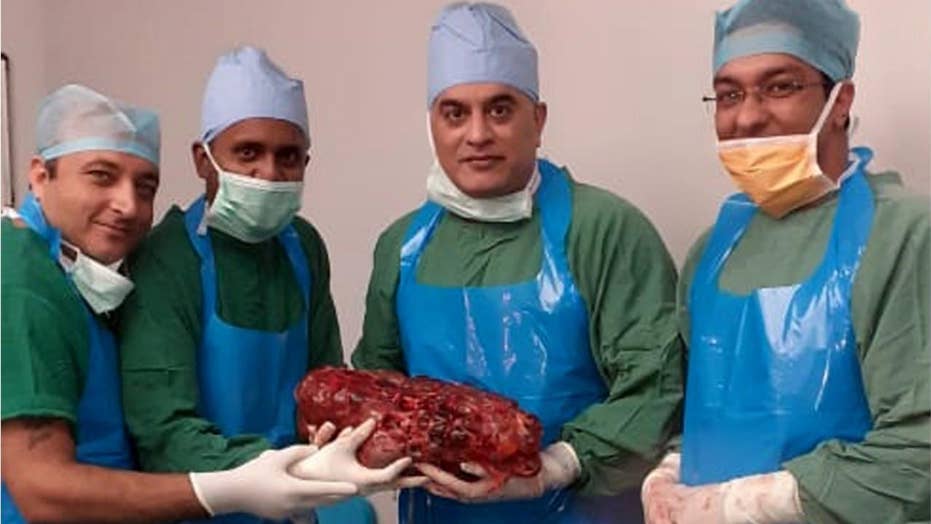 Surgeons in India have removed a 16-pound cyst-covered kidney from a patient who plans to apply to Guinness World Records.

Surgeons in India removed what is believed to be the world’s largest kidney from a 56-year-old man who has a genetic disorder that causes numerous cysts to grow on the organ.

Doctors said they knew the organ would be large, but didn’t expect it to weigh a whopping 16 pounds, which is seven pounds heavier than the current world record holder, British news agency SWNS reported.

The team said they knew the kidney would be large, but did not expect it to weigh a whopping 16 pounds.  (SWNS)

MAN STUCK GARLIC CLOVE IN EAR IN BID TO GET RID OF INFECTION, LEFT IT FOR 2 MONTHS, REPORT SAYS

“While a normal human kidney weighs between 120-150g (approx.. 4.2-5.29 ounces), this kidney equaled the weight of two newborn human babies,” Dr. Sachin Kathuria, a urology consultant at Sir Ganga Ram Hospital, where the patient was operated on, told SWNS.

The team said they plan to submit it to Guinness World Records to unseat the current largest kidney ever removed.  (SWNS)

The patient had been diagnosed with autosomal dominant polycystic kidney disease (ADPKD), which is the most common inherited kidney disorder, according to Genetic and Rare Disease Information Center (GARD). Symptoms typically appear between 30 and 40 years old, but can begin years earlier, and may include pain in the back, sides and headache.

Kathuria told SWNS that his patient’s surgery took two hours, and that the man is now on dialysis while waiting for a donor. He also said his team plans to apply for the new Guinness World Record, which is currently claimed by a surgical team in Dubai. The patient the Dubai team had treated had a 9.2-pound kidney removed after suffering from polycystic kidney disease, according to GuinnessWorldRecords.com.