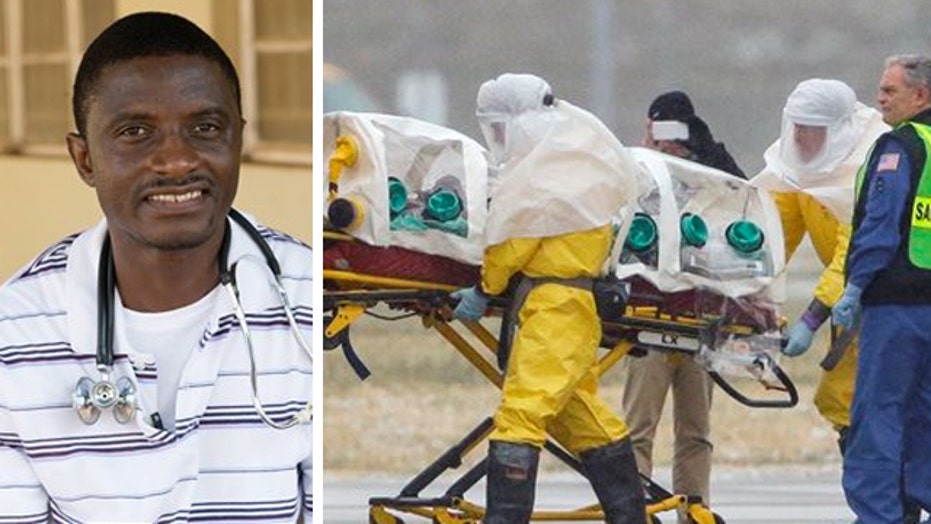 A surgeon who contracted the Ebola virus while working in Sierra Leone is fighting for his life at a Nebraska hospital, where doctors say his condition is "extremely critical."

A statement released early Sunday by Nebraska Medical Center said that doctors treating Dr. Martin Salia were "using the maximum amount of supportive care possible in an effort to save his life," while the head of the hospital's biocontainment unit described the treatments as "an hour-by-hour situation."

"He is extremely ill," Dr. Phil Smith said of Salia in a statement released by the hospital. "We have multiple highly-trained specialists who are experts in their fields targeting his most serious medical issues ... Ebola produces symptoms that can obviously create a life-threatening situation for the patient. But he couldn't be surrounded by a more caring, compassionate and talented group of people. We will do everything humanly possible to help him fight this disease."

A plane carrying Salia from West Africa landed at Eppley Airfield in Omaha on Saturday afternoon and the 44-year-old was transported to the hospital by ambulance. The hospital said Salia might be more ill than the first Ebola patients successfully treated in the United States.

Ebola has killed more than 5,000 people in West Africa, mostly in Liberia, Guinea and Sierra Leone. Of the 10 people treated for the disease in the U.S., all but one has recovered.

Salia's ambulance to the hospital was accompanied by a single Nebraska State Patrol cruiser and a fire department vehicle -- a subdued arrival in contrast to the August delivery of Dr. Rick Sacra, whose ambulance was flanked by numerous police cars, motorcycles and fire vehicles.

Salia has been working as a general surgeon at Kissy United Methodist Hospital in the Sierra Leone capital of Freetown. It's not clear whether he was involved in the care of Ebola patients. Kissy is not an Ebola treatment unit, but Salia worked in at least three other facilities, United Methodist News said, citing health ministry sources.

Salia, a Sierra Leone citizen who lives in Maryland, first showed Ebola symptoms on Nov. 6 but tested negative for the virus. He eventually tested positive on Monday.

The U.S. State Department said it helped facilitate the transfer of Salia; the U.S. Embassy in Freetown said he paid for the expensive evacuation. The travel costs and care of other Ebola patients flown to the U.S. have been covered by the groups they worked for in West Africa.

Salia's wife, Isatu Salia, said in a telephone interview that when she spoke to her husband early Friday his voice sounded weak and shaky. But he told her "I love you" in a steady voice, she said.

The two prayed together, and their children, ages 12 and 20, are coping, Isatu Salia said, calling her husband "my everything."

Nebraska Medical Center spokesman Taylor Wilson said members of Salia's family were not at the hospital Saturday, but were expected to arrive "in the near future."

Sierra Leone is one of the three West Africa nations hit hard by an Ebola epidemic this year. Five other doctors in Sierra Leone have contracted Ebola, and all have died.