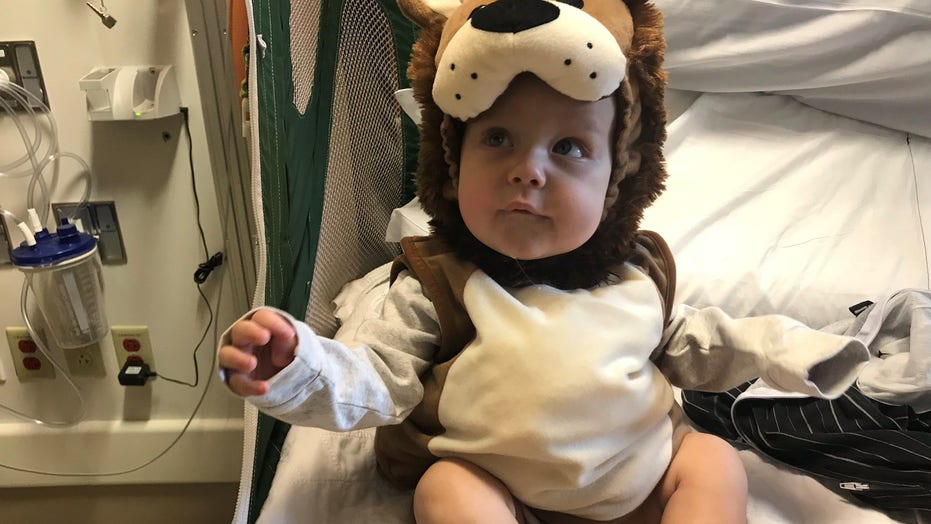 Halloween represents much more than just the spookiest day of the year for Hannah Chamberlain, who lost her 1-year-old son Sean to cancer in March.

Halloween 2018 was one of the happiest times she remembers spending with Sean, who, all things considered, was generally in good health while undergoing treatment at Boston Children’s Hospital. He was 8 months old at the time.

Sean in one of his Halloween costumes last year. (Hannah Chamberlain)

“It was so special because it felt like home. Everyone was dressed up, most of them were children [with cancer],” she said. “His eyes would light up when he saw them [in costumes].”

Chamberlain said she and Sean enjoyed trick-or-treating at the many nurses' stations on the floor.

“He was such a charmer; he was a really happy little guy,” she said. “The whole month we watched Halloween movies. We ordered decorations and his room was was decked out like if you had walked into a Halloween store.”

When Sean was roughly four months old, he came down with what his pediatrician thought was just a chest cold. But when the young boy’s condition continued to deteriorate, Chamberlain knew something more serious was going on.

“It was a huge red flag when he didn’t want to breastfeed, but they kept telling me he was fine,” she said.

Chamberlain’s mother, a nurse with more than 40 years of experience, also could tell something was seriously sickening her grandson. Another trip to a pediatrician revealed Sean had developed small bruises on his body — what Chamberlain said she and her family soon learned was a sign of acute myelogenous leukemia (AML).

Further testing led to a formal diagnosis, which was devastating for Chamberlain and her husband, Sean Siegel II, 28.

"They [doctors] didn’t want to tell me his prognosis, but I wanted to know the facts. Eventually, I found out he had a 40 percent chance [of survival],” she said, noting the percentage slowly decreased as Sean’s treatment continued over the following months.

The baby's health took a turn for the worse following Halloween, another reason why the candy-filled day now serves as such a happy memory for Chamberlain.

Some of the rocks currently at Sean's grave. (Hannah Chamberlain)

After Sean passed, Chamberlain turned to a local rock-painting Facebook group, asking members to help her bring a bit of color to her son’s grave. Many sent her rocks painted with characters from Disney movies and the beloved children’s show "Sesame Street."

Now, she hopes to place Halloween-themed rocks on her late son's grave.

“It’s a nightmare,” Chamberlain said of seeing Sean’s grave. “But happy memories soothe [the pain]. The color brings warmth and happiness to the grave; the rocks have helped our family heal. Instead of thinking of death, I think of all the happy times.”

But Chamberlain also sees the rocks as a way to raise awareness about pediatric cancer and the lack of funding it receives. Though cancer is the No. 1 cause of death by disease among children, only 4 percent of federal cancer research funding goes toward pediatric cancer research, according to the National Pediatric Cancer Foundation.

“It’s unethical,” said Chamberlain, who documented Sean’s cancer journey on the Facebook page “Baby Sean Strong” and has since used the platform to raise awareness about pediatric cancer. In September, she held a blood drive to commemorate Childhood Cancer Awareness Month.

“This is more than helping a mother heal after her child died of cancer. This is about raising awareness, even subconsciously,” she continued. “I just hope that when people are painting a rock, they’re not just thinking about Sean. I hope they're thinking about [the lack of funding for] pediatric cancer.”