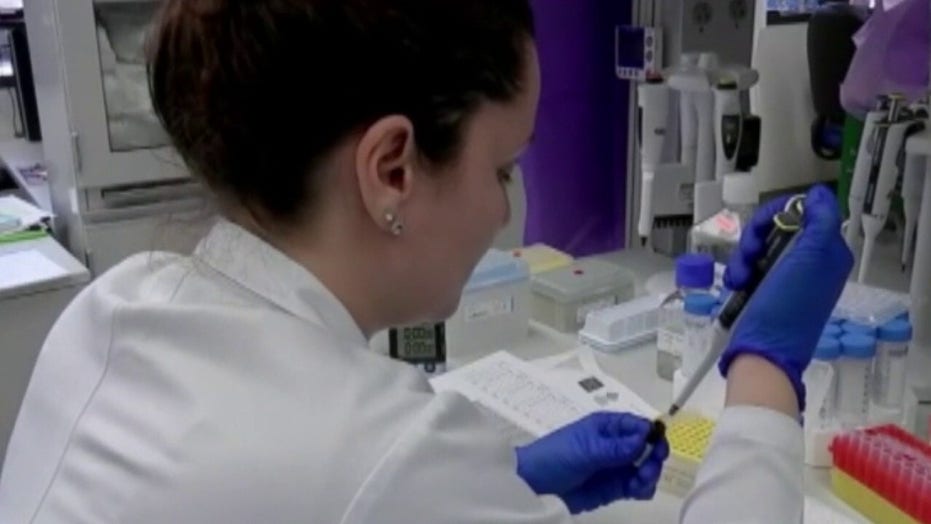 A government official tells the Associated Press that the first dose in a clinical trial for a potential coronavirus vaccine will be delivered on Monday; insight from Fox News medical contributor Dr. Marty Makary and former White House physician, Dr. Ronny Jackson.

A 78-year-old member of the Iranian clerical body that chooses the country's supreme leader has died from the illness caused by the new coronavirus, news agencies reported Monday. He was the latest of several senior Iranian officials to have been infected in the worsening outbreak.

The outbreak has infected nearly 14,000 people in Iran and killed more than 700, with the toll jumping by more than a hundred in the last 24 hours. The real numbers may be even higher, as some have questioned the government's reporting.

People wearing face masks exercise on the shore of an artificial lake, in Western Tehran, Iran, Sunday, March 15, 2020. Many people in Tehran shrugged off warnings over the new coronavirus as authorities complained that most people in the capital are not treating the crisis seriously enough. For most people, the new coronavirus causes only mild or moderate symptoms. For some it can cause more severe illness. (AP Photo/Vahid Salemi)

The vast majority of people recover from the new virus. Those with mild illness recover in about two weeks, while those with more severe illness may take three to six weeks to recover.

The semi-official Fars and Tasnim news agencies reported that Ayatollah Hashem Bathaei, a low-profile, moderate member of the Assembly of Experts, died from the COVID-19 illness.

The clerical assembly has the authority to appoint or remove the supreme leader, who has the final say on all major policies.

Supreme Leader Ayatollah Ali Khamenei, who is 80 years old and has been in power since 1989, wore disposable gloves at a recent public event, apparently as a precaution.

Cabinet ministers, members of parliament, Revolutionary Guard members and Health Ministry officials have been infected, compounding fears about Iran's response to the global pandemic, which has infected nearly 170,000 people worldwide and killed more than 6,500.

The official leading Iran's response to the virus on Sunday expressed concerns that health facilities could be overwhelmed if the rate of new cases continues to climb.

Civil society activists wearing face masks distribute written information to passers-by during a campaign to raise awareness of the new coronavirus in Kabul, Afghanistan, Monday, March 16, 2020. For most people, the new coronavirus causes only mild or moderate symptoms. For some it can cause more severe illness. (AP Photo/Rahmat Gul)

“If the trend continues, there will not be enough capacity,” Ali Reza Zali, who is leading the campaign against the outbreak, was quoted as saying by the state-run IRNA news agency.

Iran is believed to have around 110,000 hospital beds, including 30,000 in the capital, Tehran. Authorities have pledged to set up mobile clinics as needed.

Despite the mounting toll, many Iranians are shrugging off concerns about the virus. The streets of Tehran were bustling on Sunday, with many people out shopping in stores with little evidence of panic-buying.