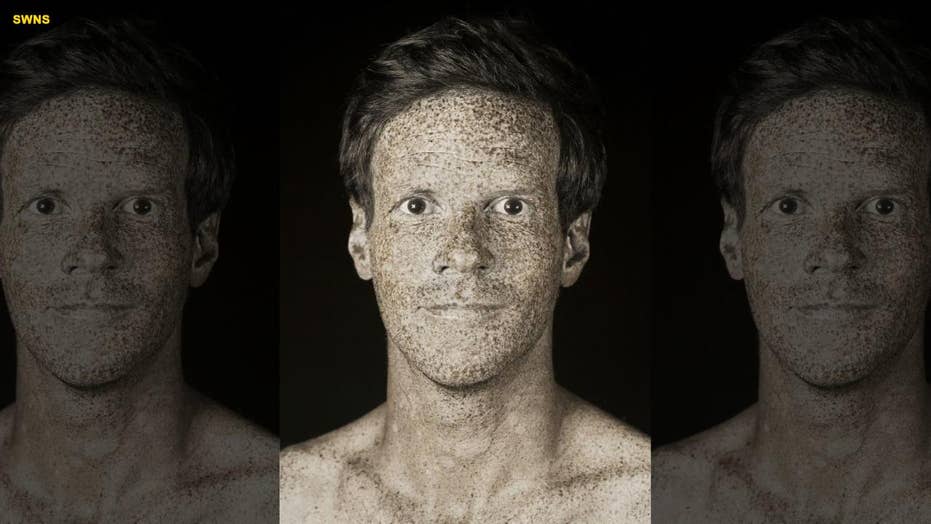 A French photographer released a new series of images titled 'RAW,' which show 20 different faces combined with close-up details from the model's body that reveal the marks and spots on the skin caused by exposure to UV light.

A French photographer has released a unique series of images revealing the skin damage caused by exposure to UV light that is not typically visible to the naked eye. The “Raw” series, which includes 20 different headshots and close-up photos of various body parts, was shot with special equipment by Pierre-Louis Ferrer.

“Each model offers the viewer an intimate view of his own being, which he cannot even perceive by himself,” Ferrer told SWNS of his inspiration. “This relationship of intimacy and trust is the opposite of our society, where selfies and social networks project an idyllic vision of our lives. I am fascinated by the possibility to see beyond the visible.”

The photos reveal different shaped marks and spots on the models’ bodies that you wouldn’t ordinarily see with your own eyes. Exposure to ultraviolet radiation is a major risk factor for most skin cancers, according to the American Cancer Society.

The photographer used special equipment to reveal the marks. (SWNS)

Sunlight is the main source of UV rays, with tanning lamps and beds also responsible for exposure. People who get a lot of UV exposure are at a greater risk for skin cancer, and while UV rays make up only a small portion of the sun’s rays, they are the main cause of the sun’s damaging effects on the skin.

Skin cancers start when the damage affects the DNA of genes that control skin growth. UVA rays age skin cells and can damage their DNA, and are linked to long-term skin damage such as wrinkles but are also thought to play a role in some skin cancers. UVB rays can damage skin cells’ DNA directly and are the main rays that cause sunburns, while UVC rays are not normally a cause of skin cancer as they don’t penetrate the Earth’s atmosphere and are not found in sunlight.

According to the American Cancer Society, sunburn and tanning are the short-term results of too much UV exposure, and are signs of skin cancer although some may not typically think of them as such. (SWNS)

According to the American Cancer Society, sunburn and tanning are the short-term results of too much UV exposure, and are signs of skin cancer although some may not typically think of them as such. Long-term exposure can cause early skin aging, wrinkles, loss of skin elasticity, dark patches and pre-cancerous skin changes such as dry, scaly rough patches.

“This series illustrates the raw and natural character of the human begin, revealed by the technique of ultraviolet photography,” he told SWNS.