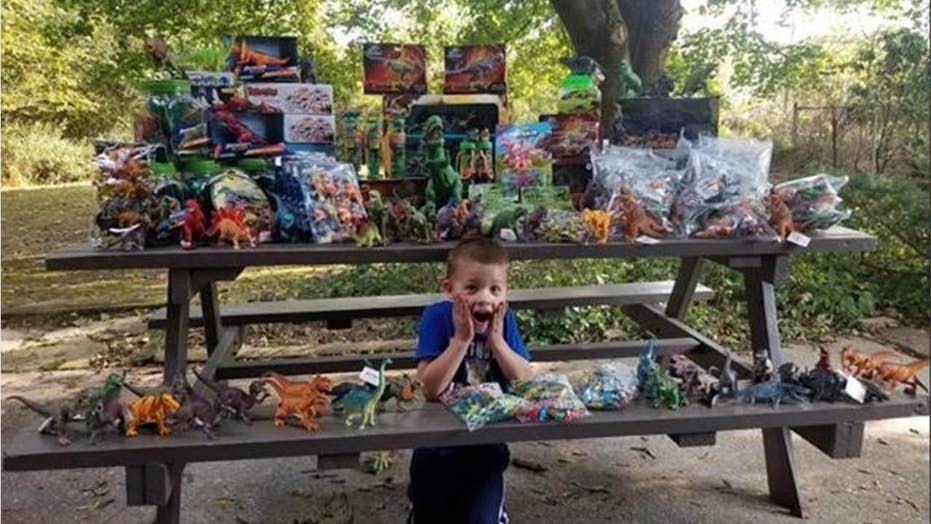 5-year-old cancer survivor gives back for his birthday

Weston Newswanger and his family organized a toy drive for child cancer patients at PennState Children’s Hospital. The 5-year-old came up with the idea after he was asked what he wanted for his birthday.

A 5-year-old boy used his birthday wish to ask for thousands of toys that he could donate to a hospital that helped save him from cancer. Weston Newsanger, of Pennsylvania, was treated at Penn State Children’s Hospital for rhabdomyosarcoma after his diagnosis in 2016.

Weston decided to ask for toys that he could donate to the hospital where he was treated for cancer. (Courtesy of Amy Newswanger)

The cancer is a tumor that arises in the soft tissue, such as the muscles, and can occur throughout childhood or even be present at birth, according to St. Jude Children’s Research Hospital. It accounts for about 7 to 8 percent of all childhood cancers, with about two-thirds of pediatric patients receiving their diagnosis before age 10.

Treatment usually requires surgery, chemotherapy and radiation. More than 70 percent of children diagnosed with rhabdomyosarcoma that has not spread have long-term survival, according to St. Jude.

Now marking two-years cancer-free, the boy decided to do something special for his Sept. 26 birthday.

“I want to get Play-Doh and dinosaurs for the children of the hospital,” he told his mom, according to WHP.

And so, Weston’s wish was born and over several weeks his family collected over 1,200 containers of Play-Doh, over 1,000 dinosaurs and hundreds of other toys for the children.

His mom shared his wish on Facebook, and the packages started rolling in. (Courtesy of Amy Newswanger)

Weston’s mother, Amy, had been keeping supporters updated on Facebook. On Aug. 22, she wrote about how Weston got excited when he saw gifts for kids waiting in the mail.

“Weston is so excited when he gets a package to add to his pile,” she wrote. “So far we have 134 packs of Play-Doh, 2 monster trucks, over 60 dinosaurs and 1 Spiderman. We have also been given monetary donations for him to go pick things out for the hospital. Plys my cousin is collecting items in Hershey and has a pile of things in addition to what we have here.

In total Weston received over 1,000 cans of Play-Doh, over 1,000 dinosaurs and hundreds of other toys for the children. (Courtesy of Amy Newswanger)

“If you missed what is going on here’s an update…Weston decided on his own that he didn’t want anything for his birthday (Sept. 26th) instead he wanted people to donate Play-Doh and dinosaurs to him to take to Hershey hospital to give to the children. (Child Life is also asking for super heros),” she wrote.

Photos taken before Weston dropped off his donation showed him smiling broadly among the toys packed in the family truck.