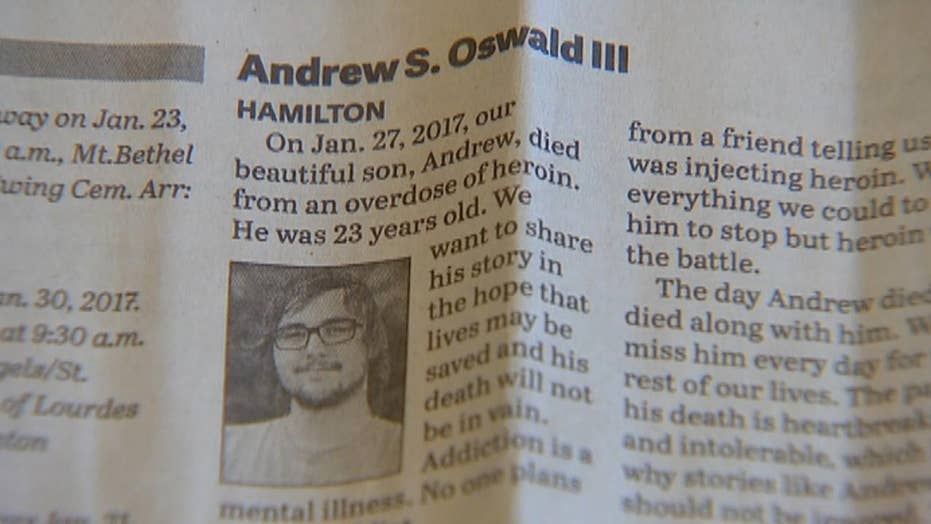 A family’s open and honest obituary for their 30-year-old daughter who struggled with drug addiction has reached thousands online, with many sharing their own stories of substance abuse while thanking the parents for not hiding their child’s struggles. Madelyn Ellen Linsenmeir, who died on Oct. 7 and leaves behind her 4-year-old son, Ayden, was first introduced to drugs at age 16 following her family’s move from Vermont to Florida.

According to the obituary, which was published in the Burlington Free Press, Linsenmeir first tried OxyContin at a high school party, which led to a dangerous relationship with opioids that would ultimately take her life.

“It is impossible to capture a person in an obituary, and especially someone whose adult life was largely defined by drug addiction,” her parents wrote. “To some, Maddie was just a junkie – when they saw her addiction they stopped seeing her. And what a loss for them. Because Maddie was hilarious, and warm, and fearless, and resilient. She could and would talk to anyone, and when you were in her company you wanted to stay.”

"Know that hundreds of thousands of families who have lost someone to this disease are praying and rooting for you. Know that we believe with all our hearts that you can and will make it. It is never too late."

“In a system that seems to have hardened itself against addicts and is failing them every day, she befriended and delighted cops, social workers, public defenders and doctors, who advocated for and believed in her till the end,” the obituary said.

The obituary noted that following the birth of her son, “Maddie tried harder and more relentlessly to stay sober than we have ever seen anyone try at anything. But she relapsed and ultimately lost custody of her son, a loss that was unbearable.”

It said that the last two years were particularly hard on the single mom, but over the summer she remained sober for 12 days, which were “full of swimming and Disney movies and family dinners, we believed as we always did that she would overcome her disease and make the life for herself we knew she deserved.”

The family did not reveal which drug Linsenmeir struggeled with on before her death, but they urged others who are struggling with addiction to “know that every breath is a fresh start. Know that hundreds of thousands of families who have lost someone to this disease are praying and rooting for you. Know that we believe with all our hearts that you can and will make it. It is never too late.”

More than 63,600 Americans fatally overdosed in 2016, with nearly two-thirds of deaths involving a prescription or illicit opioid. According to the Centers for Disease Control and Prevention, the data confirms that a rise in drug overdose deaths is being driven by the use of synthetic opioids, including illicitly manufactured fentanyl.

Linsenmeir’s family is not the first to open up about their child’s addiction in an obituary, with more and more families choosing to use the forum as a platform to warn others about the dangers and heartbreak of addiction.

The family asked for donations to be made to the Turning Point Center in lieu of flowers, and that those who judge others with addiction issues to “educate yourself about this disease, because that is what it is. It is not a choice or a weakness.”

EDITOR'S NOTE: A previous version of this article said Madelyn Ellen Linsenmeir was 20 years old when she died. Her obituary indicated she was 30.