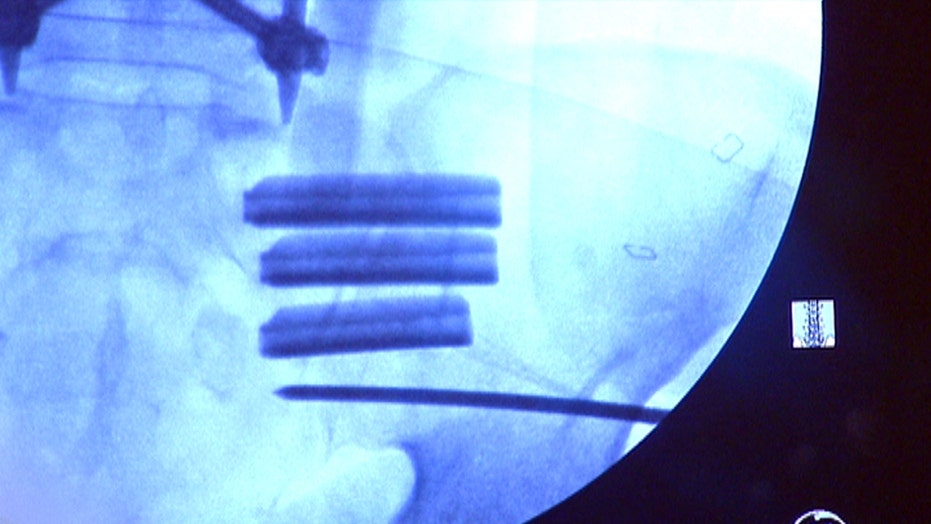 After getting injured while serving in Afghanistan, Eric Varela turned to a non-invasive surgery to stop his pain and get his life back

Neither track nor motor vehicles travel the mountains of Afghanistan, requiring soldiers to traverse them by foot while carrying the full weight of their gear. Such physical pursuits can strain the body, and former U.S. Army staff sergeant Eric Varela was no exception.

“The only thing I could do is just vomit,” 39-year-old Varela, who is now retired from the military police corps, told FoxNews.com of a mission that altered his life forever. “I was just in that much pain.”

After failing a basic physical training test he usually scored high on, Varela learned the aches in his lower back were due to a herniated disc— the result of consistent wear and tear he suffered on the job. Undergoing surgeries helped ease his pain but unfortunately led to another injury: sacroiliac (SI) dysfunction or SI joint pain.

Several surgeries and pain medications later to correct the latter issue, Varela, a father of three, has found relief in a noninvasive procedure that aims to fuse and re-stabilize the SI joint.

“I am able to go to my children's baseball games,” he said. “I love to go see [them play], and they love to see me there.”

The SI joint connects the sacrum to the ilium, or the top part of the pelvis, and it is a unique joint insofar as it does not facilitate movement, like the knee or finger joint. Rather, the joint offers a steady base and supports the upper body while upright. When it starts to move too much, SI dysfunction occurs, thereby triggering pain.

Dr. John Shiau, a neurosurgeon at the Northwell Health system who treated Varela, said SI dysfunction can be caused by various events, such as being on the receiving end of a rear-end collision. Pregnant women, whose hormones loosen their joints, are also susceptible to the injury.

In Varela’s case, a previous procedure wherein doctors fused his L4 lumbar spine to his sacrum, the bone above the tailbone, and had an artificial disc implanted, led to SI joint pain.

“Thirty percent of people who have had a fusion end up having SI pain,” Shiau told FoxNews.com.

SI pain is often confused with lower backaches, Shiau said, but the injury can literally be a pain in the butt.

“Patients will actually point out the one spot on the buttocks, right over the SI joint,” he said. Typically, patients experience this pain when sitting in a certain position or putting pressure on one leg, like when climbing stairs.

Varela had these classic symptoms, but his pain was left untreated for so long that he began developing full-body spasms at least twice a day.

“I’d wake up in the middle of the night stuck in that position,” Varela said. “I’d have to ask my wife to help me out of it.”

To diagnose SI joint pain, doctors put pressure on patients’ joints to see whether discomfort arises and inject their joints with numbing agents to see if the antidote helps.

Treatments include anti-inflammatory medications, physical therapy and acupuncture. Examples of more invasive options are regular injections of numbing agents and burning the nerves near the joint.

The U.S. Department of Veterans Affairs first prescribed Varela pain medications that posed adverse side effects. However, the drugs made him irritable and moody, and caused him to lose interest in things he once enjoyed. He also began distancing himself from his family.

For patients like Varela, surgery is a last resort, but the operation he underwent, called iFuse, has made a world of difference.

Approved by the Food and Drug Administration in 2008, iFuse involves making a small, 1-inch incision on the side of the buttocks, and introducing a guiding pin through the ilium and connecting it to the sacrum. The surgeon then drills around this guiding pin to make room for the implant, which aims to fuse the joint. This process is repeated up to four times to ensure the joint is stable.

Patients usually are discharged within hours after the surgery. Dr. Shiau asks them to keep weight-bearing to a minimum, and suggests walking with crutches or a walker for up to 30 days to allow the bone to calcify around the implants.

Varela underwent the iFuse surgery on the left and right side SI joints. While he still has residual pain from some of the lower back fusions, he said his SI joint pain has completely stopped.

Now, he can enjoy things he feels he has missed out on, such as spending more time outdoors with his kids.

Like any surgery, iFuse may not have the same results for everyone. Dr. Shiau said 10 to 15 percent of patients may not respond to the surgery. Additionally, the surgery is not for people who have been in serious car accidents where their sacrum was completely dislocated or people who are osteoporotic and have poor bone densities.