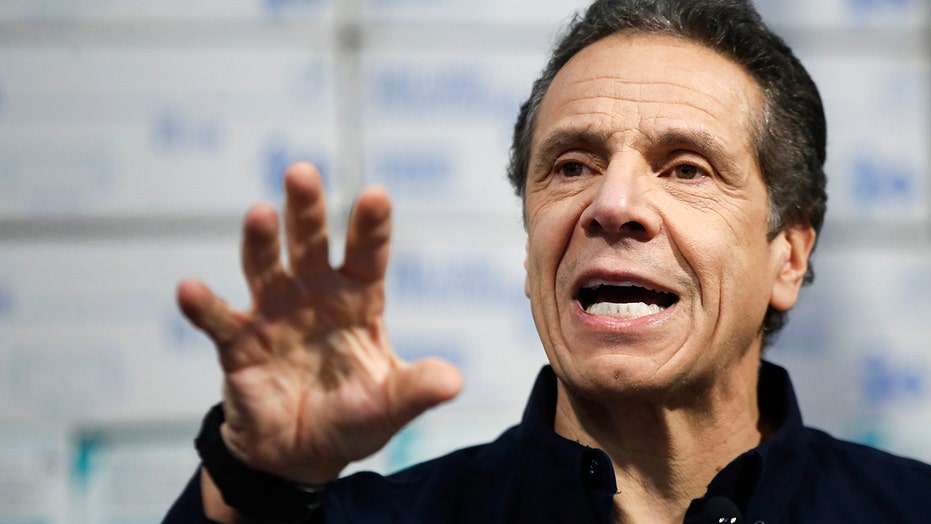 Cuomo: Most NY COVID-19 cases are people who were home

Effectiveness of New York lockdown in question; reaction and analysis on 'The Five.'

The coronavirus has had a chillingly unequal impact on the elderly, including the many millions of Americans who live in long-term care facilities or require at-home assistance.

Yet the likes of New York and New Jersey – the two states leading the U.S. death toll for COVID-19 – have protocols in place that allow health care workers who tend to the elderly to return to their jobs just seven days after testing positive, even without a second test to ensure the infection had cleared.

After weeks of criticism over the rising death toll among the elderly, Gov. Andrew Cuomo announced some policy changes on Sunday, most notably that workers at care homes in the state must be tested for coronavirus twice a week, but declined to acknowledge any failures in past policies.

The guidelines in place – which have remained even through the peak of the pandemic – for those workers who test positive have some public health officials and medical experts scratching their heads.

"It is inexcusable that those caring for one of the most at-risk populations, the elderly, aren't held to the same standard as everyone else. It is common knowledge that anyone who has contracted COVID-19 must be virus-free for 14-days before it is safe for them to return to regular social contact," Peter Pitts, president and co-founder of the Center for Medicine in the Public Interest, and former associate commissioner with the U.S. Food and Drug Administration (FDA), told Fox News. "That is even more obvious and crucial for those caring for the elderly. The wildfire velocity with which COVID-19 consumes senior citizens living in assisted living facilities calls for more, not less caution."

In his view, "reduced seven-day isolation for those involved in elder care is a deadly mistake."

The Centers for Disease Control and Prevention (CDC) guidelines suggest that asymptomatic health care professionals (HCP) "with a recognized COVID-19 exposure might be permitted to work in a crisis capacity strategy to address staffing shortages if they wear a face mask for source control for 14 days after the exposure." (Fourteen days is the known incubation period for the disease regardless of whether an infected person exhibits symptoms or not.)

However, a document entitled "Protocols for Essential Personnel to Return to Work Following COVID-19 Exposure or Infection," issued on March 31 by the New York Department of Health, verifies that "essential personnel who have been exposed to a confirmed or suspected case of COVID-19 can be permitted to work if personnel have maintained isolation for at least seven days after illness onset (i.e., symptoms first appeared) and have not had a fever for at least 72 hours, without the use of fever-reducing medications, and with other symptoms improving."

In this April 17, 2020,  photo, a patient is loaded into an ambulance by emergency medical workers outside Cobble Hill Health Center in the Brooklyn borough of New York. (AP Photo/John Minchillo)

If recovering from coronavirus, they "must wear a face mask for 14 days following onset of illness."

HOW CUOMO'S' SPECIAL EFFORT' FOR NURSING HOMES EXACERBATED CORONAVIRUS CASES: 'THEY DIE ALONE. YOU CAN'T HAVE A PROPER SEND-OFF'

New Jersey's mandate mirrors the same language, emphasizing that essential workers – including health care professionals – can be permitted back to work providing that they have maintained isolation for "at least seven days after illness onset and have been at least 72 hours fever-free (without fever-reducing medications) and with other symptoms substantially improving."

Dr. John Whyte, Chief Medical Officer of WebMD, noted that he was surprised by such recommendations.

"The CDC actually changed their guidelines from seven days after illness onset to 10 days. That is the new recommendation in the absence of any testing strategies," he said. "Seven days may indeed be too short, especially when we are talking about a very vulnerable patient population."

Several New York-based home care and assisted living services contacted by Fox News affirmed that they follow the state protocols and the seven-day time frame along with ensuring the other actions such as wearing a mask are adhered to by their employees.

But the mere notion that those in close proximity to the most vulnerable not having to follow the 14-day guidelines that the rest of the U.S. is subject to has many New Yorkers on edge, including one who has launched a Change.org petition urging Cuomo to amend the protocol.

"New York Home Health Aides (HHAs) and Licensed Practical Nurse (LPNs), if asymptomatic for COVID-19, yet contagious, are being allowed back to work with their elderly clients after only seven days of quarantine," lamented Lisa Howard. "They are not required to do a full 14-day quarantine or get tested again before going back to work."

Howard explained that in late April, the longtime and much-loved aide for her elderly, New York-based parents tested positive for the novel pathogen while caring for them, although she was asymptomatic, and thus immediately sent home. The aide is then said to have told Howard's parents – who are pushing 80 and have a range of underlying conditions including her mother with multiple sclerosis – that she could return to work in seven days as per the state guidelines and her employer's mandate.

"That was not going to happen as far as I was concerned. My parents the following day had to get tested so while they were out I had a company come in and sanitize their house. Thank God they came up negative," Howard, who said she is now tending to her parents, continued. "I see many other elderly people in their community who also have HHAs [home health aides]. To have a home health aide or LPN come back to work after a positive test for this deadly virus and possibly infect a client is a blatant disregard for human life."

She pointed out that many of the elderly do not have family close by that can tend to them, so many are left with little choice but to accept their home health aide back after seven days despite a positive diagnosis. Howard also questioned why, given how susceptible those over the age of 65 and with underlying conditions are to severe infection or death from coronavirus, the workers were not at least being made to undergo a second test before returning to work.

At the very least, some medical professionals contend, it should be a minimum of 10 days.

A recent Harvard University study noted that people who test positive for the virus but never develop symptoms over the following 10 days after testing are probably no longer contagious. But there are documented exceptions, hence why experts generally recommend 14 days of isolation.

Nonetheless, the scale of the problem seemingly could become significantly worse given that New York's Department of Health does not monitor coronavirus infections among nursing home workers "who provide care to a population described as among the most vulnerable to the deadly virus," according to Buffalo News.

That information vacuum pertaining to infected workers has become a "frightening issue" for those in such homes and their loved ones who are banned from visiting them.

Medics transport a patient to the King David Center for Nursing and Rehabilitation in the Gravesend neighborhood of the Brooklyn borough of New York. (AP Photo/Mary Altaffer)

The state's protocols have also raised red flags around the staggering death toll that has afflicted nursing homes. As the Kaiser Family Foundation points out, Northeastern states – namely New York and New Jersey – have had the most nursing home deaths among the states submitting data, with more than 3,500 and 2,000 people dying in nursing homes in those two states, respectively.

"The data also show that there have been nearly 51,000 infections with COVID-19 at more than 4,000 long-term care facilities in the 36 states reporting such data. New Jersey reported the highest number of cases (11,608) and North Dakota the least (61)," the foundation states. "Residents of long-term care facilities are among the most vulnerable to infection and serious illness from COVID-19, given the population density in such facilities and residents' underlying health conditions. Moreover, nearly 40 percent of nursing homes in the U.S. had infection control deficiencies in 2017, a problem that may contribute to high numbers of cases and deaths."

According to state data, up to 80 percent of coronavirus deaths in New York have been those aged 65 or older. Similarly, in New Jersey, 77 percent of those who have died from coronavirus have been 65 or older, which is in lockstep with overall national demographic statistics.

However, Melissa Nolan, and assistant professor of epidemiology and biostatistics at the University of South Carolina, contended that the seven-day rule might be sufficient and that the "original 14-day quarantine isolation window was a conservative estimate of what the anticipated incubation period might be."

"As we learn more about the virus, evidence suggests that most people with symptoms will present within 4 to 6 days of exposure. Based on our current evidence, we believe people who have recovered from COVID-19 infection are no longer shedding virus seven days following their last symptom and that they do not pose a risk for transmitting this virus to others," she said. "Ideally, we would have universal testing available, and everyone would be able to have a test prior to returning to work."

Representatives for the governor's offices in New York and New Jersey did not immediately respond to a request for comment.