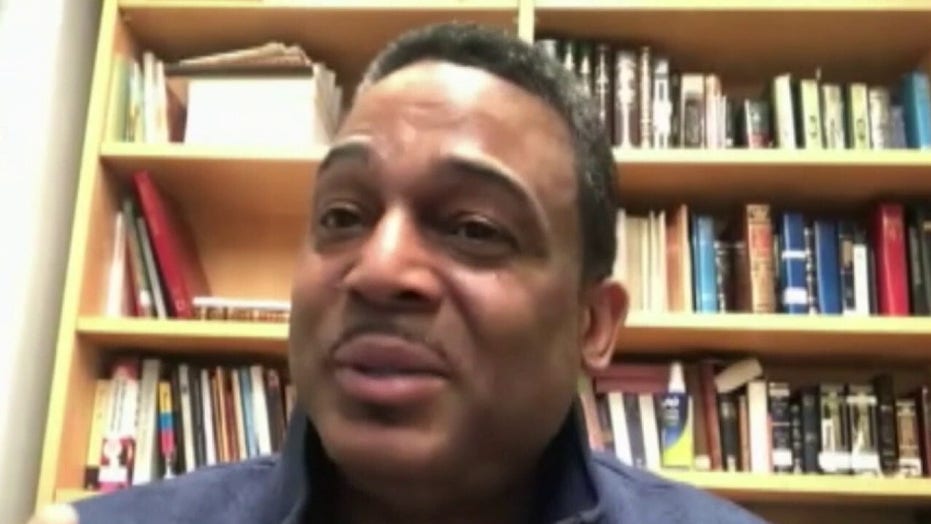 Mount Sinai Hospital Chaplain Rocky Walker, who served on the frontlines of Operation Desert Storm, says he feels he's much closer to death now than he was then; Lauren Green reports.

The coronavirus has killed at least 80 veterans at an elder care facility in Massachusetts, in what's being described as the deadliest known outbreak at a long-term care facility in the U.S.

An additional 82 veterans and 81 employees have tested positive for the virus at Holyoke Soldiers' Home, and federal officials are trying to determine whether residents were denied proper medical care as deaths continue to climb.

“It’s horrific,” said Edward Lapointe, whose father-in-law lives at the home and had a mild case of the virus. “These guys never had a chance.”

The outbreak has now claimed the lives of nearly one-third of all residents at the veterans' home, with a new fatality being reported almost every day.

Cleaners unwrap their protective gear as they leave the Soldiers' Home in Holyoke, Mass on March 29. At least 80 residents have died from the coronavirus at the central Massachusetts home for aging veterans, as state and federal officials try to figure out what went wrong in the deadliest outbreak at a long-term care facility in the U.S. (Jessica Rinaldi/The Boston Globe via AP, File)

With limited staffing, workers were forced to routinely travel to other units in order to provide help, which caused the virus to spread at an extremely high rate, according to Joan Miller, a nurse at the home. Some workers were without proper personal protective equipment, the Boston Globe reported.

She added that an entire unit was forced to shut down because it didn't have enough employees to run it, forcing veterans into close proximity with those uninfected.

"Veterans were on top of each other. We didn’t know who was positive and who was negative and then they grouped people together and that really exacerbated it even more,” said Miller. “That’s when it really blew up."

Many of the veterans were at an age that made them susceptible to severe illness from the virus. Before the outbreak, about one-third of residents were 90 or older and needed round-the-clock care, the paper reported.

Only 106 residents remained as of Monday, according to Brooke Karanovich, a spokeswoman for Health and Human Services — leading some to believe the worst is over.

Flags and wreaths honor veterans April 28 on the grounds of the Soldiers' Home in Holyoke, Mass., where a number of people died due to the coronavirus. While the death toll at the state-run Holyoke Soldiers' Home continues to climb, federal officials are investigating whether residents were denied proper medical care while the state's top prosecutor is deciding whether to bring legal action. (AP Photo/Rodrique Ngowi)

In late March, there were roughly 230 residents living at the home. Forty-three residents have since been hospitalized.

WISCONSIN WWII VET, WIFE OF 73 YEARS HAD CORONAVIRUS AND DIED WITHIN HOURS

“We’ve mostly contained the crisis, but we have such a small number so that’s almost expected,” Miller added, according to the paper.

The superintendent of the veterans' home, Bennett Walsh, has been placed on administrative leave following the outbreak. He's accused state officials of falsely claiming they were unaware of potential problems.

Earlier this month, he said they knew the home was in “crisis mode” when it came to staffing shortages and were notified early and often about the contagion at the facility.

Beth Lapointe said her father's roommate tested positive for the virus in March -- and later died -- but her father was initially denied a test because he didn't show any symptoms. As the virus spread, family members were kept in the dark about what was going on inside, she said.

“Every day I would ask different people, ‘What’s going on in there?' And I would never get information,” she said.

There is currently no official count of nursing home deaths across the country. The federal government has only recently required the nation’s more than 15,000 nursing homes to start reporting numbers of confirmed and presumed deaths and infections, but it is not yet clear when that count will be published.