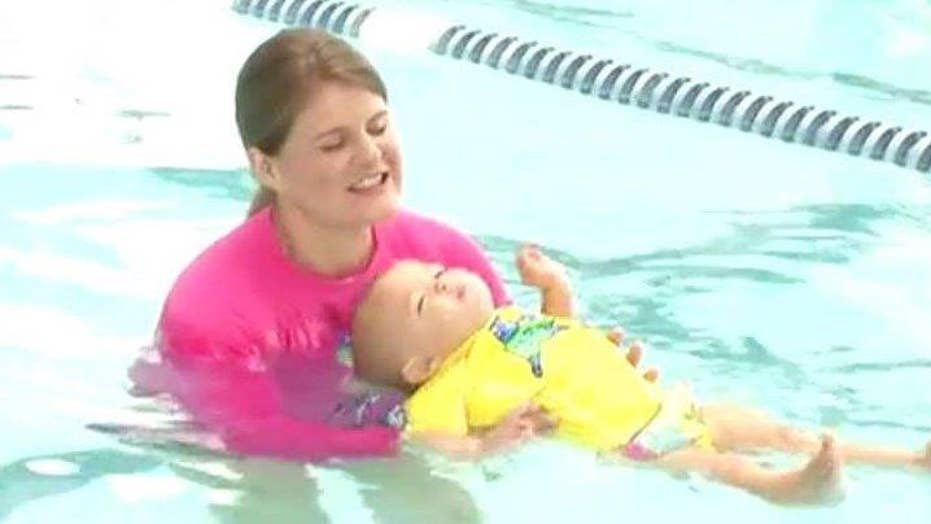 Mother defends letting her baby float in a swimming pool

Mother from viral video explains her actions on 'Fox & Friends'

A viral video showing a baby girl learning to float in a pool has some parents outraged, with many saying the girl appears to be struggling to float on her back. The girl’s mother said the action was to teach her daughter to self-rescue after the family lost their son to a drowning accident when he was 2 years old.

The video, posted to Facebook on May 2, shows the girl sitting on a step in the pool, while an adult who is off camera puts a sandal in front of her to get the girl to grab it. The girl reaches for the sandal, falls face first into the pool, and begins flipping over and floating. Critics argued the girl appeared to struggle to keep her head above the water.

Mom Keri Morrison appeared on Fox & Friends on Saturday and defended the video of her 13-month-old.

“My son is no longer here because he didn’t have these skills,” she said. “To me, I’m protecting her, and that’s what a parent is supposed to do— to protect her child— and I feel like I failed my son, and I’m not going to fail my daughter.”

Baby Josie underwent four weeks of lessons at 6 and a half months old, Ashleigh Bullivant of Infant Swimming Resource, told Fox & Friends. The babies are taught to hold their breath, float, and roll over without sinking. Typical lessons are 10 minutes long.

“Our students at Infant Swimming Resource are taught everything incrementally in a very gentle way and honors the way they learn physically,” Bullivant said before demonstrating with the technique with Josie.

Morrison said she wants her daughter to know what to do if she falls into the water, and seeing her face above the water at a young age gives her hope.

“That vision is what fires me up to make sure that other children are safe and can do this in the water,” Morrison said.