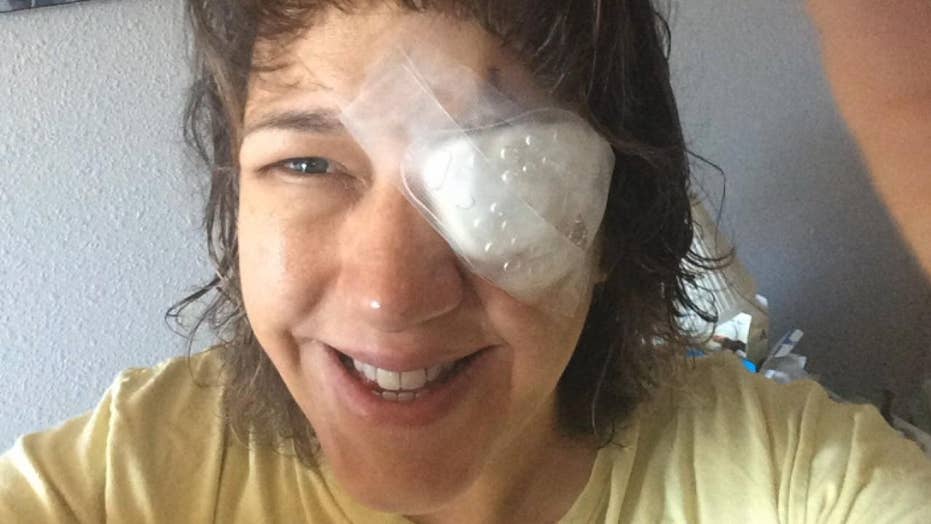 Stacey Peoples was with her 4-year-old son when some water splashed into her eye and a parasite attached to her contact lens.

A mom was left blind in one eye when a microscopic parasite latched onto her cornea after she went swimming while wearing her contact lenses.

Stacey Peoples, 49, was left without vision in her left eye after contracting acanthamoeba keratitis, a rare infection in which an amoeba attacks the outer layer of the eye.

The mom-of-four was misdiagnosed with conjunctivitis in June 2014, but her eye became so painful during her family’s 4th of July vacation that she could not leave her bedroom.

The school administrator was rushed to the emergency room in Traverse City, Michigan, when she completely lost vision in her left eye, which had clouded over “like a zombie’s”.

Medics determined Peoples' eye was being attacked by acanthamoeba, a microorganism that lives in common water sources and in rare cases can cause severe infections.

Peoples, of Denver, believes she contracted the infection at her local pool when she wore her contact lenses while swimming with her 8-year-old son Charlie.

Contact lenses can create small abrasions in the eye, which make it easier for the amoeba to attach when the eye comes into contact with water.

Peoples, 49, was left without vision in her left eye after contracting acanthamoeba keratitis, a rare infection in which an amoeba attacks the outer layer of the eye. (SWNS)

"When we got to the cabin for Fourth of July weekend I just went straight to bed," Peoples said. "The pain was so intense. It felt like someone was snapping a rubber band against my eyeball every four or five seconds. The back of my eye felt like it was going to blow out the back of my brain."

"I had such an intense migraine on top of everything else," she said. "Both of my eyes were constantly watering and my nose too. I didn’t know it was possible to produce this much fluid."

"My eye looked like a zombie’s," she said. "It was completely cloudy and the whites of my eye was bright red and so gross. The pain became so bad I went to the emergency room and they didn’t know what was going on. They booked me an appointment with a cornea specialist and after she looked in my eye, she went to consult medical books. It was very worrying."

"She told me she believed I had an amoeba, and while I was relieved that they finally had some idea of what was going on, I didn’t know what I was in for," Peoples said. "She said, 'We have to try and save the eye and worry about vision later.' The pain was so, so bad, I asked them to take my eye, but they said that they needed to do everything to save it."

"I had lost my vision completely by this point. All I could see was white," she said.

Peoples was forced to apply painful eye drops every two hours for five months to kill the infection and was in so much pain she could not stray far from her bed.

The mum was forced to take a seven-month leave from her job to fight the infection, which had completely destroyed the outer layer of her eye leaving her blind.

"I was prescribed eye drops which essentially contain pool cleaner to kill the parasite. I had to put these into my eyes every two hours for months," she said. "I was using the drops every two hours until December, and for those months I moved from my bed to my rocking chair and back again. I couldn’t do anything else."

"I had two or three very dark days where I thought this pain is too much, it would be better if I wasn’t here," she said.

The blinded mom was amazed when she could see clearly just one day after the procedure.

“They removed my damaged cornea and replaced it," she said. “When the patch came off two days after the surgery, it was amazing. I went into hospital unable to see and then came out and could see so clearly. It's been wonderful. I have a little bit of trouble with depth perception but with glasses, I have 20/20 vision."

"I'm a huge advocate of organ donation now because this wouldn't be able to see if not for my generous donor," she said.

Following her ordeal, Peoples warned others to avoid wearing contacts in water.

The childhood education specialist said she would not have been able to get through her illness without the support of her husband Jeff Peoples, 49, a financial investment counselor.

"The reason I am sharing my story is to warn people not to wear their contacts in water or even in the shower," she said. "This is rare but it can happen. Even if you’ve been doing it for twenty years like me."

"Doctors tell you not to do it. My doctors think I picked this up in the pool while wearing my contacts," she said. "I'm just lucky I have such a wonderful family. Otherwise, I would never have gotten through this."