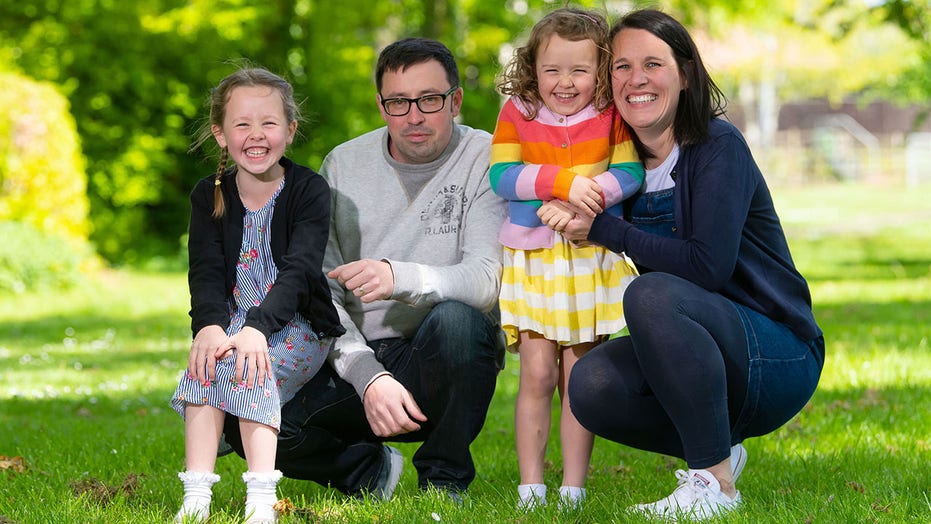 A 34-year-old mother of two who underwent surgery for suspected appendicitis says that if it wasn’t for her growing fetus, she would have never known a rare cancer was causing her pain.

“It was because of being pregnant that it triggered the issue with my appendix meaning I needed surgery — without the surgery, my tumor wouldn’t have been accidentally found,” Rachel Avon, of Wales, told Caters News.

Avon, who is now five years cancer-free, was diagnosed with pseudomyxoma peritonei, a rare type of cancer that typically begins in the appendix. According to Cancer Research UK, the cancer typically spreads through the wall of the appendix and throughout the lining of the abdominal cavity. Some patients won’t experience symptoms, while others may develop abdominal or pelvic pain, trouble getting pregnant, abdominal swelling and bloating, changes in bowel habits, hernia, loss of appetite or feeling of fullness.

Rachel Avon, with her daughters Ffion (left) and Cari, and partner Ross, said she would have never known she had the rare cancer if her growing unborn baby wasn't pushing on the tumor to cause pain. (Caters News)

According to Cancer Resarch UK, pseudomyxoma peritonei can only be confirmed through abdominal surgery, as was the case with Avon. When she was six months pregnant with daughter Cari, her doctor scheduled her for an appendectomy, only to discover a tumor. Avon’s team was able to remove the tumor and she continued with her pregnancy, giving birth at 41 weeks gestation, according to Caters News.

“I was really nervous — having surgery at six months pregnant was a huge thing but they said despite being pregnant, they had to put my life before the baby’s,” she told Caters News. “It was an extremely difficult time but as I was already a mom to Ffion, who was only 1 at the time, I understand I had to put myself first.”

Avon told Caters News that her medical team did not tell her about the tumor until after she had given birth.

“When I discovered that doctors hadn’t told me about my cancer I was so shocked — in the short term it didn’t feel like the right decision but five years on, I know it was the right decision they made for us," she said. "Doctor’s reasoning for not telling me until Cari was born was due to the fact I wouldn’t have been able to have an MRI to see if the cancer had spread until after the baby was born.”

Avon’s MRI was clean, and she has annual scans to ensure the cancer hasn’t returned.

She has since run the London Marathon to raise money for cancer research, and told Caters News that she feels healthier than ever.