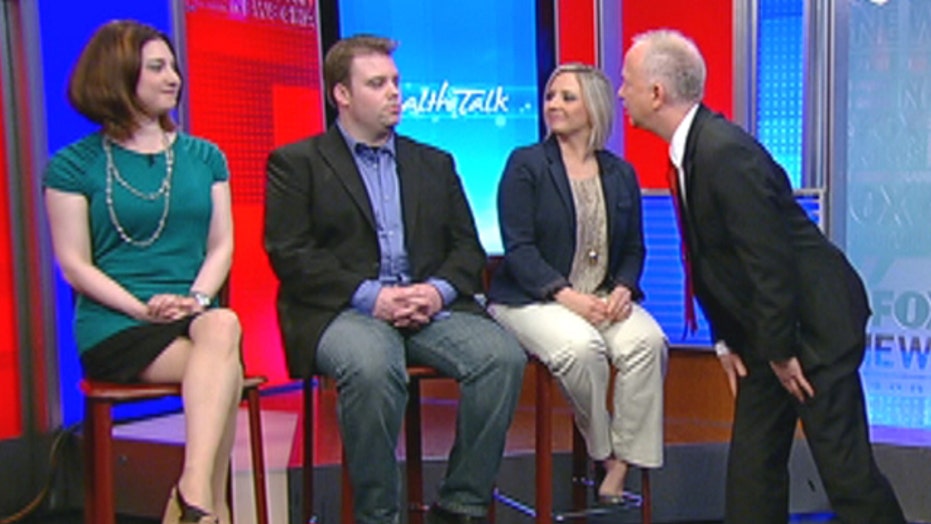 Diagnosing illness with just a glance

What if there was a way to heal yourself before you got sick? John Kortum, a medical intuitive and author of “The Kortum Technique,” shows Dr. Manny how to detect an illness by just looking at someone, and says he can teach anyone to do the same

John Kortum calls himself a medical intuitive.  He claims he can simply look at a person and diagnose his or her current and future medical problems.

From a preventative medicine standpoint, an individual can take this information and start to modify his or her lifestyle and/or diet before a disease sets in.  For a current medical problem, Kortum can help the person evaluate if his or her current treatment is working.

Kortum wrote a book about his method called “The Kortum Technique” in which he claims to be able to teach others to do what he does.

Kortum said the medical community has been pretty open to this new, alternative way of thinking.

Kortum told Dr. Manny Alvarez, senior managing health editor for FoxNews.com, he realized when he was about 8 years old he had the ability to intuit the medical diagnosis of people around him.

“When I look at people, I notice they have perceptual qualities, and I’m able to use my sense of eyesight, and I detect qualities or properties about people,” Kortum told FoxNews.com. “Over the course of my lifetime, I’ve learned those properties or qualities – or what I call ‘organ indicators’ – relate to each of the body’s specific major organ systems.”

Kortum said there was nothing unique or special about his field of vision; he simply knows what he’s looking for when he sees a person.

“Most of the information I receive comes from a person’s face,” he said. “I think of the human being as a gramophone, and the face is the sound horn where a lot of information comes out.”

According to his own evaluations, Kortum said his findings have an accuracy of 93 percent.

Alvarez asked Kortum to ‘diagnose’ three Fox News staffers – Jessica, Melissa and Kevin – each of whom have previously-known health problems.

Jessica has a few health problems, including Crohn’s disease, migraines, and common variable immunodeficiency (CVID) – meaning she can’t make the antibodies needed to fight off bacterial infections; Melissa has a thyroid problem; Kevin suffers from type 1 diabetes. They all sat in a row while Kortum evaluated them.

He started with Melissa, looking her over carefully. He said he perceived a sort of concentration from her.

“I perceive a density, which tells me she might have something going on with her digestion,” Kortum said. “As I look at her, it’s telling me it might be more related to the upper intestinal tract, rather than the lower intestinal tract. There might be a little bit of cardiovascular indication, and a lot of times I will pick up on information the patient doesn’t know about yet, or medical tests can’t confirm.”

While Kortum didn’t pick up on Melissa’s thyroid condition, Melissa said she does sometimes have issues with her GI tract.

“I guess this might be a good time to go to (a GI doctor),” Melissa said.

“There is cardiovascular disease that runs in my family,” Melissa added. “Both my grandparents have had heart attacks and bypass surgery, so maybe that is something I should check up on as well.”

Melissa later remembered she had a slight heart murmur as a baby, which could have been what Kortum saw when he referred to her cardiovascular indicator.

Next, Kortum looked at Kevin.

“He’s got a good level of what I call moisture, which is always good for the body,” Kortum said.

“As I look at Kevin, there might be a mild, respiratory indication,” Kortum continued. “As I look at him, there could perhaps be some prostate indication in the future.”

Kortum did not mention Kevin’s diabetes. However, he later noticed an abnormality in Kevin’s muscular-skeletal system. Kevin said he suffers from knee pain, and if he sits up straight for too long a period, his back acts up too.

Next, Kortum looked over Jessica, and said he perceived “something going on with digestion.”

“I also perceive indications of cardiovascular to keep a lookout for,” Kortum added. “There could be something perhaps related to blood sugar.”

Jessica told him he was spot-on about her digestion and cardiovascular diagnoses. In addition to Crohn’s, her recent blood tests showed an elevation in cholesterol levels and she has started taking medicine to treat high blood pressure. She also later recalled that she had been diagnosed with hypoglycemia as a child.

Like Melissa, Jessica’s paternal side of the family has had cardiovascular events, and Jessica said it’s definitely something to watch out for.

Their evaluations got all three of them thinking a little more about prevention.

Kortum said he doesn’t approach people in the grocery store to tell them what’s wrong with them, but he does meet with people for one-on-one consultations. This way, people don’t have to wait five or 10 years – they can avert a crisis now, he added.

“To me, it is very exciting that medical science is embracing this,” Kortum said, adding everyone – not just doctors – can learn his technique.

To learn more about ‘The Kortum Technique,’ check out thekortumtechnique.typepad.com/