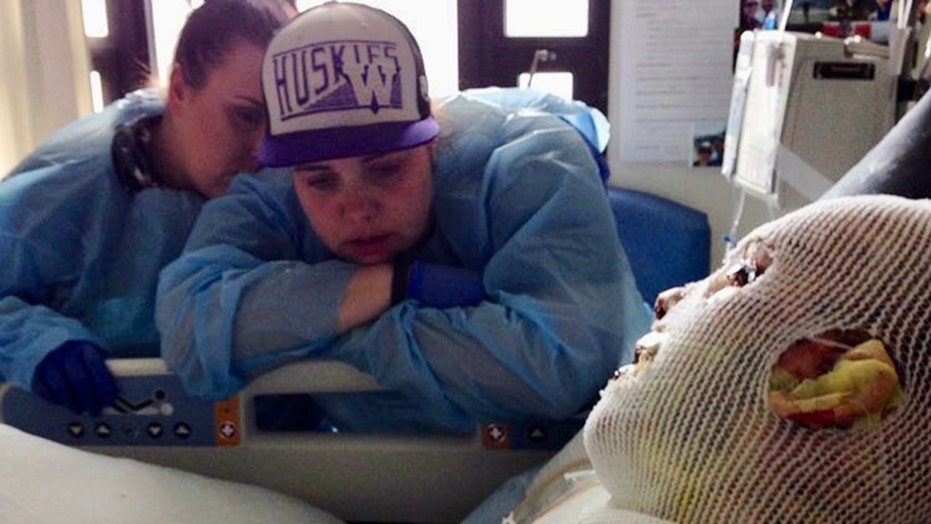 A 38-year-old Indiana man whose eyes had to be sewed shut and his body covered in pigskin as he burned from the inside out due to a rare reaction to a medication is urging others diagnosed with the condition to “be brave.”

Jonathan Laird said it started three years ago with conjunctivitis and flaking skin, and that he drove himself straight to the hospital once he developed blisters in his mouth and throat, according to Mirror.co.uk.

Laird, who is now healed, said he wants others diagnosed with SJS to be brave.  (Media Drum World)

“My eyes started to feel like they had little pieces of glass in them, it was very uncomfortable, and I was scared to touch them or rub them because it literally felt like I was going to cut my eyes,” he told the news outlet. “I thought, ‘Is this Stevens-Johnson Syndrome?’ I can’t imagine I would actually get this but is this what this is?”

Laird’s suspicions were confirmed, and a doctor ordered him to stop taking Lamotrigine, which he had been prescribed for depression. The medication is an anti-epileptic and can be used to treat seizures and bipolar disorder. According to Drugs.com, patients who develop skin rash, hives, blistering, peeling or sores in or around the mouth and eyes are instructed to seek emergency medical attention.

His eyes were sewed shut as he healed to protect his vision.  (Media Drum World)

For Laird, the symptoms only grew worse with as many as 50 sores appearing in his mouth, and a rash spreading across his back and chest. He went back to the hospital and the next day was transferred to Harbour View Medical Center in Seattle.

“When you have Stevens-Johnson Syndrome (SJS) you basically burn from the inside out,” he said, according to the news outlet. “It starts as a rash and then the rash erupts into blisters.”

Patients diagnosed with SJS are usually admitted to a hospital’s burn unit and require prompt treatment. While many cases are caused by an allergic reaction to medications, others may be the result of an infection or even vaccinations. About 10 percent of cases result in death, while those who survive may be left dealing with pneumonia, sepsis, shock or multiple organ failure, according to the Cleveland Clinic. As Laird healed, his body was covered in wraps and he couldn't move.

He said that at one point he asked his parents if he was going to die.  (Media Drum World)

“They stitched my eyes shut to protect my vision, they bound my hands together so I couldn’t rip the tube out that was down my throat,” he said.

He spent nearly two weeks in the ICU before he was transferred back to the burn unit and spent several more weeks recovering before he could see, talk or eat again. He tried to communicate with his parents by writing on paper.

“I said something like, ‘Am I going to die?’ because I didn’t know and that was really hard for them to read,” he told the news outlet. “I just looked horrible, I looked like a plane crash.”