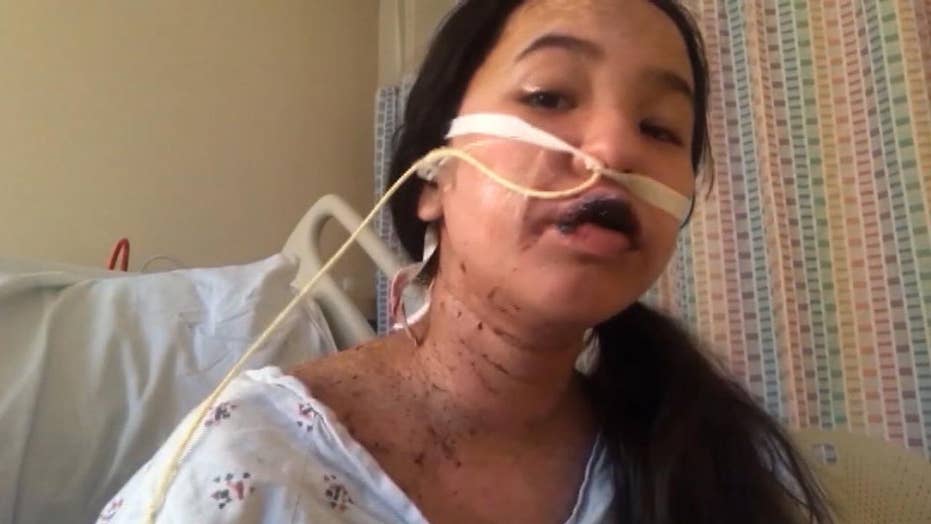 Warning, graphic images: Teen suffers severe burns from reaction to a drug prescribed by her doctor

14-year-old Ashley Silverman nearly lost her life from a reaction to a drug prescribed by a psychiatrist that left her with severe burns.

Two months after a teen’s severe allergic reaction to medication landed her in a hospital’s burn unit unable to breathe on her own, the Los Angeles student is warning others about the dangers of a little-known syndrome and the importance of researching prescriptions.

Ashley Silverman, who was prescribed Lamictal after seeking help from a therapist for mood swings, said she was told the medication would help “stabilize” her. The 14-year-old’s father, David Silverman, told Fox 11 that the prescribing psychiatrist said to watch for potential “red rash on her cheeks, like a minor sunburn.”

But two weeks after she began taking the medication, which according to the FDA is used to treat seizures and bipolar disorder, she developed a rash on her face, a fever and headaches. Her condition quickly deteriorated, and she was sent to Children’s Hospital LA where her skin began to blister, Fox 11 reported.

“At first it was just spots on my face, then they got down my neck, then my chest, and then it started to bubble,” she told the news outlet. “I felt burning a lot and I couldn’t move and I couldn’t see, I thought I was going to die.”

The horrible reaction came after she was prescribed a powerful medication for her mood swings. (David Silverman)

From there, Silverman said his daughter was transferred to the burn unit at LA County/USC Medical Center and placed in intensive care as doctors began treating her for Stevens Johnson Syndrome (SJS).

According to the National Institutes of Health, SJS is a very severe reaction typically triggered by medications that causes skin tissue to die and detach. The first symptoms typically appear as fever and flu-like symptoms, similar to what Silverman first complained about. Within one to three days, a rash forms before skin begins to blister and peel. Patients may experience trouble swallowing and breathing as well as urinating. Symptoms may last up to two weeks before the skin begins to heal.

Lamotrigine, which can be marketed as Lamictal, is listed as a possible cause of SJS, along with other medications used to treat seizures such as carbamazepine and phenytoin. Other medications may also trigger SJS, but lamotrigine’s packaging includes warnings about serious rashes that may result in hospitalization, disability or death.

Ashley and her father claim they were warned about a potential "sunburn" reaction on her cheeks, but her symptoms were much worse. (David Silverman)

“Lamictal has significant benefits for people who need it, but it also comes with a certain risk,” Dr. Peter Grossman, medical director of the Grossman Burn Center in West Hills, told Fox 11. He wasn’t involved in Silverman’s care, but said he has seen cases involving the medication and SJS before.

Grossman also highlighted that children are at a greater risk for developing SJS as a side effect of the drug than adults.

“The onus of responsibility lies with the physician, they’re the expert that parents are coming to,” he told Fox 11. “And that physician should know that and should relay that information.”

“Parents better be careful what they gif their kids, and they’d better research it thoroughly,” David Silverman told Fox 11. “I didn’t do that, I took the advice of a professional.”

Silverman had been connected with the psychiatrist through the recommendation of her school counselor. The Los Angeles Unified School District (LAUSD), which is now investigating the incident according to Fox 11, is affiliated with a non-profit health clinic in North Hills that offers mental health services to students.

“The Los Angeles Unified School District has a memorandum of understanding with [the clinic] for the provision of counseling services to students. Although we are not at liberty to comment on specific student matters, we are extremely alarmed by these photos and are fully investigating this matter,” LAUSD said in a statement, provided to Fox 11. “The safety and well being of all students remain our top priority.”

David Silverman told the news outlet that the prescribing psychiatrist visited his daughter in the hospital and accepted responsibility for the situation.