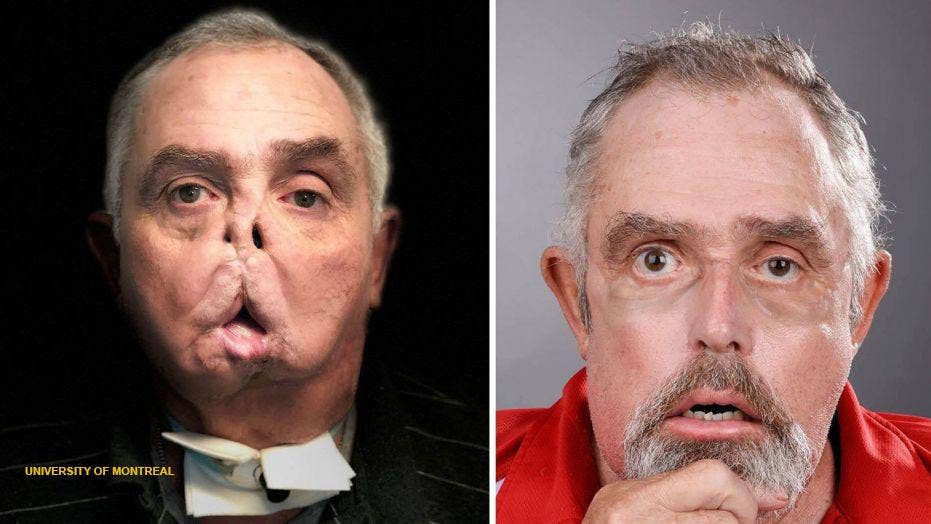 A 64-year-old Canadian man was left disfigured in a hunting accident seven years ago, but thanks to a 30-hour face transplant operation, he can now chew, smell, speak and breathe properly again.

A 64-year-old Canadian man who was left disfigured in a hunting accident seven years ago can now chew, smell, speak and breathe properly after undergoing the country’s first face transplant.

Prior to the surgery, he had trouble breathing, eating, sleeping and speaking. (University of Montreal)

According to a news release from the University of Montreal, the 30-hour operation took place in May and required the collaboration of over 100 medical personnel, specialists and surgeons.

“This delicate operation is the result of years of concerted, meticulous work by an incredible team and the incredible bravery and cooperation of the patient and his family,” Dr. Daniel Borsuk, lead surgeon of the Hospital Maisonneuve-Rosemont and University of Montreal, said in the news release.

Katie Stubblefield received a face transplant after she attempted suicide by shooting herself in the face.

The man, whose name was not revealed in the press release, had undergone five reconstructive surgeries and was living with a tracheostomy, which caused him to struggle with breathing, sleeping, eating and speaking.

“As a plastic surgeon, I know that, no matter large or small, injuries to the face have a particularly symbolic aspect and are closely linked to our identity,” Borsuk said. “Facial disfigurement can have a detrimental effect on self-confidence and productivity, and therefore, this transplant offered immense hope and possibility in our patient.”

A widow meets the man who received the face from her dead husband. Watch the emotional video.

There have been approximately 40 face transplants worldwide since 2005.

In August, National Geographic featured a 21-year-old survivor of a suicide attempt who had become the youngest person in the United States to undergo a face transplant.

The Canadian man is believed to be the world’s oldest.

“We wanted to ensure that the recipient would take on what was going to be a major change in his existence in the best physical possible health, armed with all the necessary information and psychological support,” Borsuk said.

“We will continue to support the patient so he can completely adapt to his life post-surgery.”