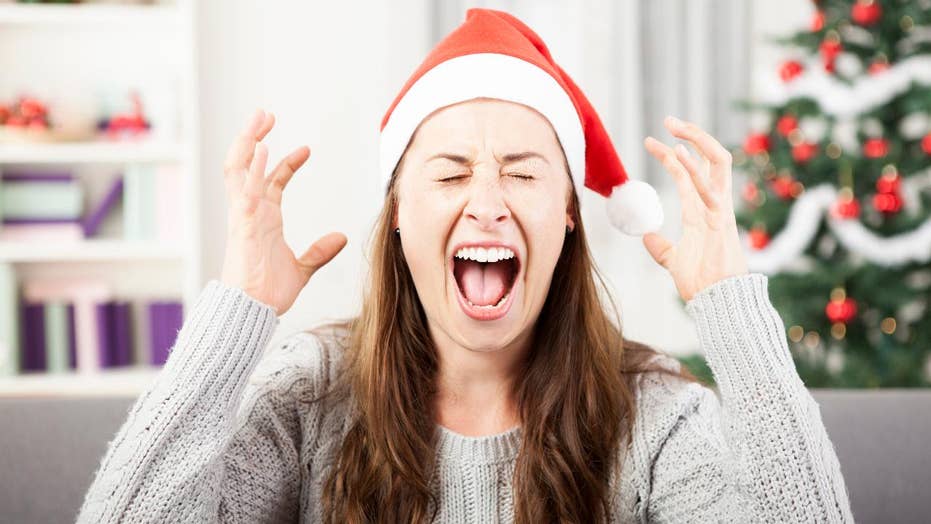 How to stay calm through the holidays

Holidays are filled with shopping, festive gatherings, and an unhealthy amount of stress. But there are ways to get around all that extra stress. Fox News’ Dr. Manny Alvarez sits down with two health experts to discuss how you cut back on holiday stressors and take a

The holidays can be overwhelming. They’re filled with shopping, festive gatherings and an unhealthy amount of stress.

But there are ways to get around all that extra stress.  Clinical psychologist Dr. Sanam Hafeez said to take a "less is more" approach to the holidays.

“People overcommit and under deliver, then beat themselves up for it leading to frustration, guilt and more stress,” Hafeez told Fox News.

According to a 2015 holiday poll by Consumer Reports, 68 percent of Americans are stressed during the holidays by long retail lines, 32 percent are stressed over financial debt and 20 percent get stressed over seeing certain relatives.

When it comes to gathering around a table with relatives from different political backgrounds, Hafeez recommended setting some rules.

“I think the host can set rules if he or she wants, but I think as guests ourselves we can have our own boundaries,” Hafeez said.

Instead of getting worked up over Uncle Tom’s opinion on the current political climate, either create a one-line zinger to end the conversation or “tactfully avoid the topic,” Hafeez added.

Another huge stressor during the holidays revolves around money. In fact, The American Psychological Association reports 62 percent of respondents said money is the leading holiday stressor.

Instead of incurring debt and then feeling guilty about it in 2018, have a positive self-talk with yourself to set limitations, Hafeez said.

“Saying alright I’m saving up to buy a home [or] I have to put away for my retirement and I’m going to have a budget. So you do something that’s maybe small but meaningful and maybe write a nice thoughtful note that goes along with the gift that seems more heartfelt,” she said.

Being lonely can add to your holiday blues and stress too. According to a study for American Psychological Association, 26 percent of people feel lonely over the holidays.

“I’ve spent a few holidays alone, but I have one thing to say about that, ‘when in doubt focus out’.  You don’t have to feel lonely if you’re making a connection. If you’re alone during the holidays try to go to a food kitchen, try to go somewhere where you can give because you never feel better than when you’re giving,” Curtis said.

Adults aren’t the only ones who stress out around the holidays. Teenagers have plenty of things to worry about too; end-of-semester exams, pressure to get good grades, gift-buying dilemmas and stressful family get-togethers can all increase anxiety levels.

“Teenagers these days have a lot on their plate, [and] I think holidays sort of bring that out and parents put a lot of expectations on their kids,” Hafeez said. “So I think it’s important for parents to lay out the expectations in a respectful way, respect their boundaries and say look, I can Uber you back let’s say if you go with me for half of the party. Or say maybe you can help me volunteer at the soup kitchen, involve them with some of the community activities.”