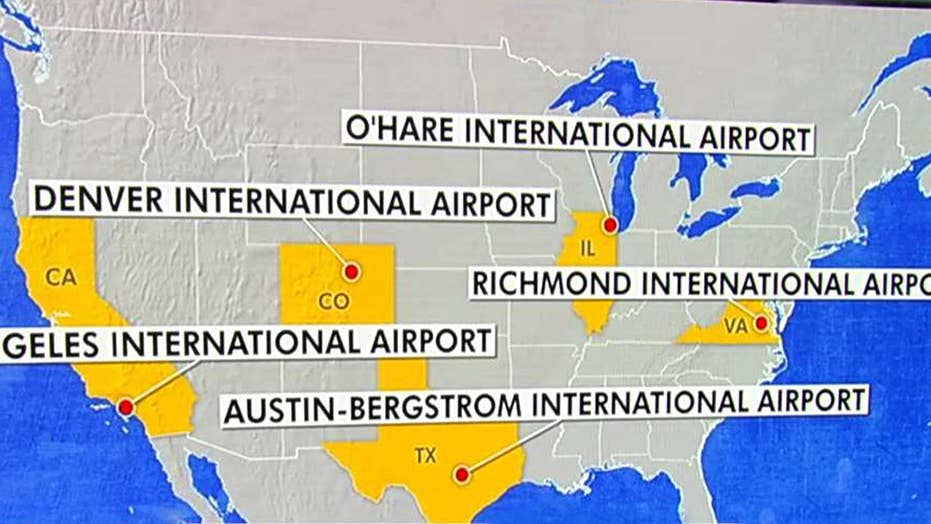 An unknown number of U.S. air travelers have been exposed to measles after at least five airports allowed people with the highly infectious disease to pass through this month, according to health officials in the affected cities.

At Chicago’s O’Hare International Airport, a person with the disease traveled through two terminals over the course of a week, ABC News reported.

PASSENGERS BEHAVING BADLY: 10 OF THE CRAZIEST THINGS THAT HAPPENED ON AIRPLANES IN 2019

Chicago's incidences of measles, mumps and rubella vaccination are among the highest in the nation, the health department reported.

Other cities with airports included in the report were Richmond, Va.; Austin, Texas; Los Angeles and Denver, ABC News reported.

In Richmond International Airport, a person measles visited Dec. 17, according to the Virginia Department of Health.

In Austin, an individual with a diagnosed case of measles visited the United Airlines gate area at Austin-Bergstrom International Airport on Dec. 17, Austin Public Health reports.

Meanwhile, in early December, three unvaccinated children who had traveled to a country with an ongoing measles outbreak tested positive for measles when they returned to Denver International Airport on Dec. 11, the network reported.

The children visited several parts of the airport - including Concourse A, the baggage area and the pickup area, Colorado's Tri-County Health Department reported. They also traveled through Terminals 4 and 5 at Los Angeles International Airport on Dec. 11, according to the Los Angeles Department of Public Health.

“Measles is an acute, highly contagious viral disease. A small number of cases are capable of quickly producing epidemics."

The best way to protect against measles is to get the measles vaccine, the report said. People who believe they may have been exposed to the disease should check their vaccination records and contact their health care provider.

The December exposures cap off the worst year for measles in more than two decades, with the Centers for Disease Control and Prevention reporting 1,276 cases, affecting the majority of U.S. states, ABC News reported. There were more cases of the infectious disease this year than there have been in the four years prior combined.

Outbreaks of the disease in Brooklyn, N.Y., and elsewhere in New York State lasted nearly a full year, threatening to end the coveted measles elimination status in the U.S., the report said. If the outbreak lasted more than 12 months it would have ended that status, which the U.S. has held for nearly 20 years.