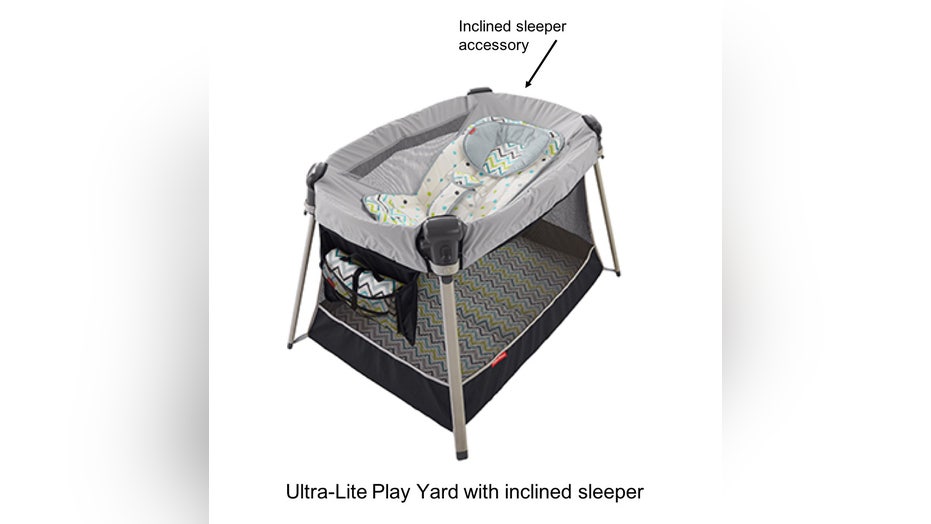 Fisher-Price has pulled another inclined infant sleeper accessory from the market following the recall of similar products that have been linked to over 30 infant deaths. While no reported deaths or injuries have been related to the Fisher-Price Ultra-Lite Day & Night Play Yards, the company said it was proactively recalling 71,000 units because infants can roll from their backs to their stomach on inclined sleep products, risking injury or death.

“At Fisher-Price, safety is our highest priority, and we work hard to earn the trust of parents and caregivers every day,” the company said in a statement, on its website. “As part of this commitment, we proactively approached the U.S. Consumer Product Safety Commission (CPSC) to initiate a voluntary recall of the include sleeper accessory included with all models of the Ultra-Lite Day & Night Play Yard, due to safety concerns raised about inclined sleep products. We initiated this voluntary recall even though there have been no reported injuries or fatalities involving this product.”

The company said the recall was proactive, and that no deaths or injuries related to the product had been reported. (Fisher-Price)

The company said the actual play yard, changing station clutch accessory and carry bag were not part of the recall, and consumers could continue using them. However, consumers were instructed to stop using the inclined sleeper accessory immediately and to contact the company for a refund or voucher.

Earlier this year, two class-action lawsuits were filed against Fisher-Price and Mattel following the recall of the Fisher-Price Rock ‘n Play Sleeper, which has been linked to 32 infant deaths. Approximately 4.7 million of those units were recalled on April 12. The first of the two lawsuits, filed by a Delaware couple, would potentially include claimants nationwide, while the second, filed by a New York woman, would include those within that state.

The products had come under fire from the American Academy of Pediatrics, who claimed the inclined sleepers, which were marketed as a place for infants to nap or sleep, failed to meet the group’s recommendations for a “safe sleep environment.”

“Infants should always sleep on their back, on a separate, flat and firm sleep surface without any bumpers or bedding,” Rachel Moon, MD, FAAP, and chair of the AAP Task Force on Sudden Infant Death Syndrome (SIDS) said in a statement.

The AAP does not recommend any sleeping products for infants or any products that require restraining a baby. It also advises against using car seats, strollers or other devices for sleeping due to the risk of rollover leading to possible suffocation or strangulation.