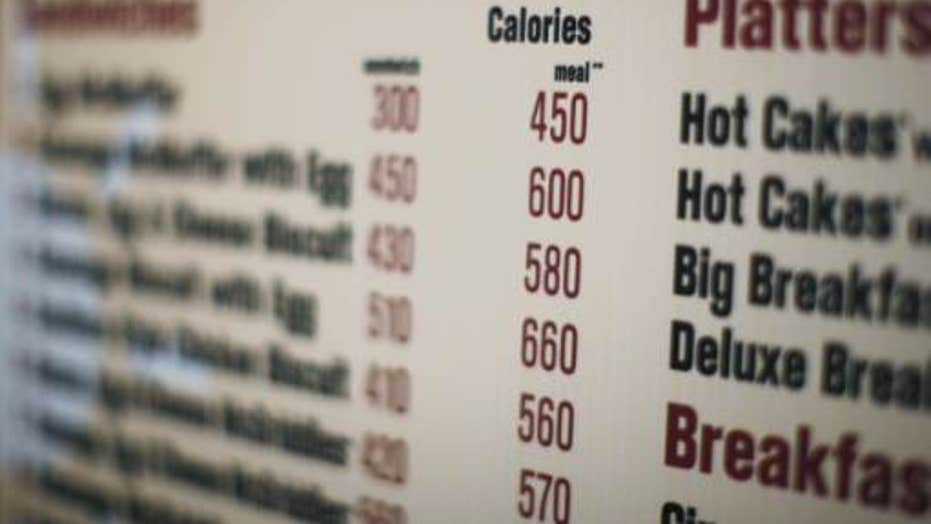 FDA’s calorie count rules: How it could impact your wallet

FBN’s Lori Rothman on the cost of the FDA’s new rules that require calorie counts to be printed on menus at restaurants.

Establishments that sell prepared foods and have 20 or more locations must post the calorie content of food “clearly and conspicuously” on their menus and have until November 2015 to comply. Convenience stores, bakeries, coffee shops, amusement parks and vending machines must also comply.

Other nutritional information— including calories from fat, cholesterol, sugars and protein— must be available in writing upon request.

"Obesity is a national epidemic that affects millions of Americans," FDA Commissioner Margaret Hamburg told reporters on a conference call on Monday.

"Strikingly, Americans eat and drink about a third of their calories away from home."

The idea is that people may pass on that bacon double cheeseburger if they know it has hundreds of calories - and, in turn, restaurants may make their foods healthier to keep calorie counts down. Beverages are included in the rules, and alcohol will be labeled if drinks are listed on the menu.

The menus and menu boards will tell diners that a 2,000-calorie diet is used as the basis for daily nutrition, noting that individual calorie needs may vary. Additional nutritional information beyond calories, including sodium, fats, sugar and other items, must be available upon request.

The rules deal a blow to the grocery and convenience store industries, which have lobbied hard to be left out since the menu labels became law in 2010 as a part of the health care overhaul. Even before the new rules were announced, some Republicans in Congress had expressed concern that they would be too burdensome for businesses.

The law came together when the restaurant industry agreed to the labeling in an effort to dodge a growing patchwork of city and state rules. But supermarkets, convenience stores and many other retailers that sell prepared food said they wanted no part of it. The restaurant industry pushed to include those outlets, as they have increasingly offered restaurant-like service.

The FDA issued proposed rules in 2011 that included supermarkets and convenience stores but excluded movie theaters. The final rules being released Tuesday include all of them.

The restaurant industry, along with nutrition and consumer advocates, has said any business that sells prepared foods should be included. If a rotisserie chicken is labeled with a calorie count at a takeout restaurant, it should be labeled at a grocery store, they argued.

Representatives for the supermarket industry have said it could cost them up to a billion dollars to put the labels in place - costs that would be passed on to consumers. They said the rules could cover thousands of items in each store, unlike restaurants, which typically have fewer items.

To assuage some of their concerns in the final rules, FDA excluded prepared foods that are typically intended for more than one person to eat and require more preparation, like deli meats, cheeses or bulk deli salads.

But a sandwich for sale at the same counter would have to have a calorie label nearby, and the majority of prepared foods in the grocery store will have to be labeled - from the salad bar to the hot food bar to cookies and birthday cakes in the bakery.

The pizza industry, led by delivery giant Domino's, has also vigorously fought the rules, saying there are millions of ingredient combinations possible. The FDA attempted to mollify some of their concerns by allowing pizza restaurants to label pizza calories by the slice, as they had requested, but would still force the labeling on menu boards in takeout restaurants.

The delivery pizza industry had asked to post information online instead, saying only a small percentage of customers walk into their stores and about half order online.

As in the proposed rules, the final version still exempts airplanes, trains, food trucks and other food served on forms of transportation.

The idea of menu labeling is to make sure that customers process the calorie information as they are figuring out what to eat. Many restaurants currently post nutritional information in a hallway, on wrappers or on their website. The new law will make calories immediately available for most items.

New York City was the first in the country to put a calorie posting law in place, and other cities and states have followed since then. Several restaurant chains have already put calories on menus and menu boards nationwide.