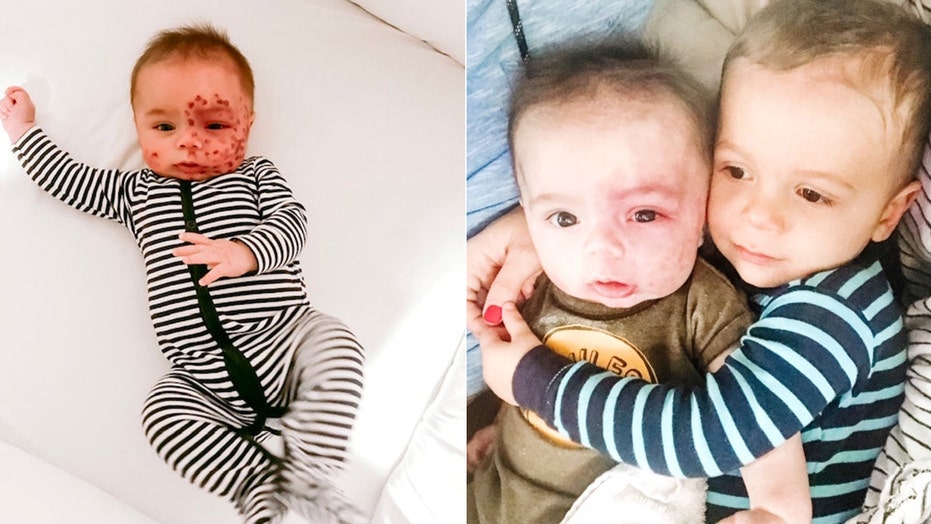 A "Bachelor" finalist whose baby was born with a port wine stain covering half of his face was left in tears when strangers mistook his birthmark for measles. Shawntel Newton was stunned to see the dark purple mark stretch across the entire left side of her newborn Leo’s face and a patch on his right cheek.

The former funeral director, who made it to the final four in "The Bachelor’s" 2010 season with Brad Womack, learned that her son, now 6 months, has Sturge-Weber Syndrome (SWS). The rare neurological condition is associated with port wine stain birthmarks and patients often experience neurological difficulties including seizures and eye problems.

Leo, pictured left after a laser treatment and right with his older brother Leo, was diagnosed with Sturge-Weber Syndrome (SWS) after doctors noticed a large birthmark covering half of his face when he was born. (SWNS)

Little Leo had his first laser treatment when he was just five days old and is also taking anti-seizure medication which doctors hope will prevent him suffering a stroke. Newton, 33, revealed that ignorant comments about her son had left her weeping.

“It can be a struggle when I am out with Leo after he has had laser treatment and people will stare and wonder what is on his face," Newton, also mom to 2-year-old Anthony, said. “The treatment makes his birthmark darker and there are red blotches on his face. One time I had someone ask me if he had the measles. I cried after that comment. I try and understand that to most people he does look a little different but it’s hard on a mommy’s heart to hear things like that.”

Newton, of Granite Bay, Calif., gave birth to Leo via a scheduled C-section on Oct. 18.

The former Bachelor contestant, who found love after the show with husband Paolo Poidmore, 38, an orthodontist, recalled: “I heard the doctor say: ‘Oh my gosh, he has a very large birthmark on his face.’ I couldn’t see him but my husband looked a little shocked. The nurses said it was a bruise."

“When they brought him over to me, half of his face was very purple," she said. "On the other side of his cheek, there was another little patch. In my medicated and exhausted state, I didn’t know how to process it. I looked at him and thought: ‘It’s odd that a bruise covers half of his face.'”

Doctors diagnosed the baby with SWS, a disorder which stunts the development of blood vessels in the brain.

The condition can lead to developmental delays and Leo was at risk of developing glaucoma, a disease which can result in blindness, and suffering from seizures.

“The pediatrician told us to get specialists involved and that our main concerns should be Leo’s skin, eye and brain," she said. “I felt really robbed of the newborn stage when you just want to be at home, breastfeeding, snuggling and connecting with your baby. Instead, my husband was on the phone making call after call, finding a neurologist, ophthalmologist and dermatologist."

“When Leo was just five days old, we went to the dermatologist," she said. “I was recovering from the C-section and so tired but I wanted to be there. They advised that we start laser treatment immediately and he had his first session that day. They kept encouraging me that he was young and resilient and he wasn’t going to remember the session - now was the time to treat him.”

But Newton didn’t stay in the room with Leo during the 60-second session, or in the sessions that followed, as doctors advised it would be too painful for her to watch.

“I gave him a blanket and the nurses swaddled him," she said. “They put a little eye shield over his eyes. There are five people in the room who hold him down while the laser zaps his skin. I hid in the bathroom and turned on the faucet as I hate to hear his cries. Afterward, I fed him and he was fine."

“The birthmark will never fully go away, but the laser treatment will whiten it," she said. “We will continue going until he is at least a year old.”

When he was just 1 month old, Leo had preventative eye surgery after doctors diagnosed him with high eye pressure that could lead to glaucoma.

Leo is on anti-seizure medication which doctors hope will protect him from having a stroke. (SWNS)

The couple also met with a neurologist to determine if Leo’s brain was affected by the syndrome.

“That was probably one of the most important appointments," Newton said. “Leo had EEGs which showed some abnormal activity in his brain although not necessarily seizures. He had an MRI when he was only a few months old and that was when we were told he had Sturge-Weber syndrome.”

The tot is now taking anti-seizure medication to protect against the risk of suffering a stroke.

“We had a really hard time trying to come to terms with putting our 3-month-old on medication because we couldn’t see that he was having any seizures," she said. “But we felt that if we didn’t we wouldn’t be able to forgive ourselves if he had a stroke.”

Newton admitted it took her time to come to terms with her son’s birthmark and she immediately feared what life would be like for him.

“When he was first born, I didn’t text all my friends a picture of him," she said. “I was processing so much, it took me time to come to terms with what had happened. When he was just two days old, it was 1 o’clock in the morning and I was trying to breastfeed him and these thoughts flooded my head. Are people going to make fun of my child? What’s going to happen when he goes to school?”

She wrote a long journal entry about her worries and posted it to Instagram where she shares her experiences under the handle @shawntelnewton.

She was amazed at the outpouring of support.

“The next day I started receiving so many emails from other parents with children with port wine stain," she said. “Now there’s over 44,000 people following along with his journey when before he was born I had 4,000 followers. I was on 'The Bachelor' so there was some interest in me already but Leo is the one they want to hear about now. The support we’ve received is crazy."

“We get packages from strangers and we even received a painting of a beautiful lion’s face and half of the lion had red dots," she said. “Now we call our son 'Leo the Lion' because of his strength and bravery. I believe he is going to do great things. He is such a happy baby. He always has a smile on his face, he’s not fussy, with everything he goes through I’m amazed how resilient he is. We are hoping to instill confidence in him because obviously, his face does look different. But I know that he is going to rock that birthmark.”