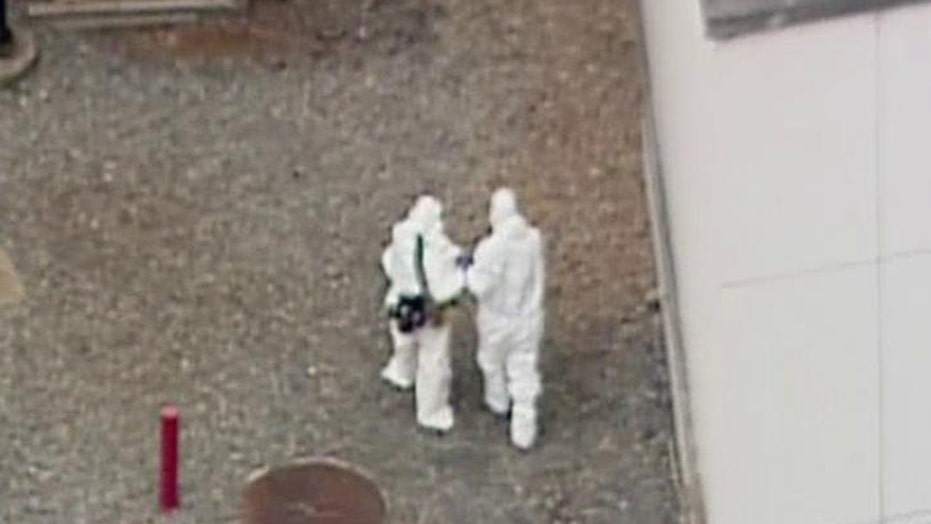 Heroic doctor with Ebola manages to walk into hospital

Dr. Kent Brantly, one of two Americans who contracted the deadly Ebola virus while working in West Africa, landed in the U.S. Saturday and arrived safely at Emory University Hospital to begin treatment.

Brantly, landed at Dobbins Air Force Base in Marietta, Ga., and arrived at the Atlanta hospital at around 12:30p.m. He managed to walk into the facility with the assistance of another medical worker.

“It was a relief to welcome Kent home today. I spoke with him, and he is glad to be back in the U.S.," Brantly's wife Amber said in a statement Saturday.

"I am thankful to God for his safe transport and for giving him the strength to walk into the hospital."

The details of why he was selected for the first flight were not immediately clear, but he had been receiving treatment with fellow American, Nancy Writebol, who is expected to take a later flight to the U.S.

The U.S. State Department and the Centers for Disease Control and Prevention (CDC) are helping to arrange the evacuation.

Fear that the outbreak killing more than 700 people in Africa could spread in the U.S. has generated considerable anxiety among some Americans. But infectious disease experts said the public faces little risk as Emory University Hospital treats the critically ill missionary doctor and his assistant, who is expected to arrive from Liberia in several days.

The CDC has received "nasty emails" and at least 100 calls from people saying "How dare you bring Ebola into the country!?" CDC Director Tom Friedman told The Associated Press Saturday.

"I hope that our understandable fear of the unfamiliar does not trump our compassion when ill Americans return to the U.S. for care," Frieden said.

"The safety and security of U.S. citizens is our paramount concern," said the State Department spokeswoman Marie Harf, in a statement released Friday morning. "Every precaution is being taken to move the patients safely and securely."

Brantly arrived at the military base on a small private jet outfitted with a special, portable tent designed for transporting patients with highly infectious diseases that can only hold one person at a time. Brantly made headlines when he asked that Writebol receive the one dose of an experimental serum while in Liberia.

Brantly, who works for Samaritan's Purse, treated Ebola patients at a Liberia hospital. Writebol also worked at the hospital for another U.S. mission group called SIM.

The Americans will be treated at Atlanta's Emory University Hospital, which has a special isolation unit.

In a press conference Friday afternoon, Emory’s Dr. Bruce Ribner, said the facility had been informed that two patients were coming to the facility; one in a few days, the next a few days after that. Ribner, a professor of infectious diseases who oversees the isolation unit, was told that the patients were safe for transport.

The patients will be placed in the hospital’s containment unit, which is discrete from the rest of the hospital. This will be the first time a patient with the Ebola virus will be treated in the U.S. and Emory is taking safety precautions seriously, Ribner said.

"From the time the air ambulance arrives in the metro Atlanta area, up to and including being hospitalized at Emory University Hospital, we have taken every precaution we know and that our colleagues at the CDC know to ensure no spread of this pathogen," he said.

The patients will be under the care of four infectious disease physicians, including Ribner. At any given time, there will be two nurses available for each patient and subspecialists are available if more care is needed. Ribner noted that, at this time, they do not know how long the patients will be under their care, as degrees of illness complications affect patients' ability to stabilize and recover.

"Based on our experience, policies, procedures, I have no concern about either my personal health or the health of the other health care workers," Ribner said.