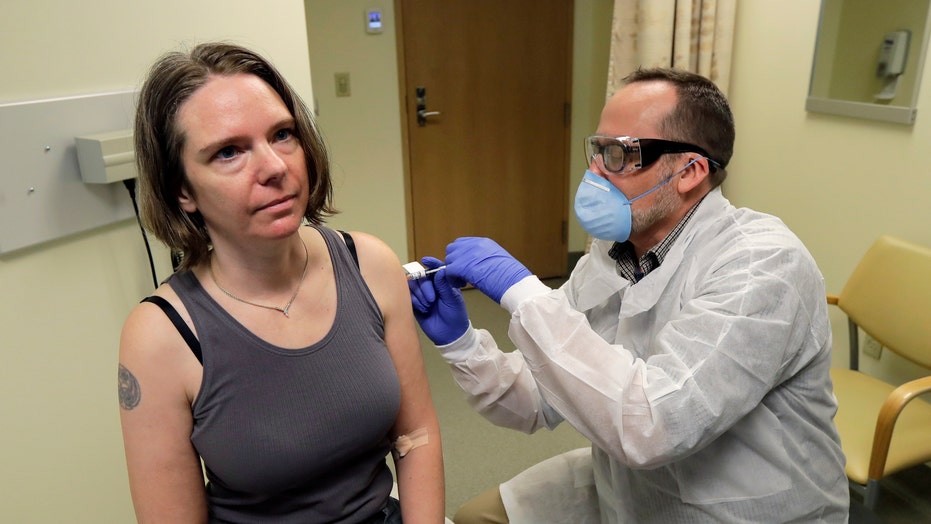 A leading HIV scientist in the U.S. said Wednesday that people shouldn't expect a COVID-19 vaccine anytime soon, according to a report.

William Haseltine, known for his groundbreaking work on HIV/AIDS and the human genome, acknowledged that while a COVID-19 vaccine could be developed, he said, “I wouldn’t count on it.”

“Do not listen to the politicians who say we’re going to have one by the time my re-election comes around,” Haseltine said, according to the Guardian. “Maybe we will [but] I’m just saying it’s not a slam-dunk case by any means ... because every time people have tried to make a vaccine -- for Sars or Mers -- it hasn’t actually protected.”

A pharmacist gives the first shot in the first-stage safety study clinical trial of a potential vaccine for COVID-19, the disease caused by the new coronavirus in Seattle on March 16, 2020. The vaccine by Cambridge, Massachusetts-based Moderna Inc., generated antibodies similar to those seen in people who have recovered from COVID-19 in a study volunteers who were given either a low or medium dose. (AP Photo/Ted S. Warren, File)

The former professor at Harvard Medical School, who founded two research departments on cancer and HIV/AIDS, was one of the first to recognize the danger the latter disease posed, according to Nordic Life Science News.

When looking at COVID-19, he said vaccines developed in the past for other types of coronaviruses failed to protect mucous membranes in the nose where the virus normally enters the body.

He added that while testing experimental COVID-19 vaccines on animals has seen a viral load reduction in certain organs -- the infections still remained.

After Moderna claimed of favorable results in its vaccine trial on Monday, he likened it to "the equivalent of a chief executive of a public company announcing a favorable earnings report without supplying supporting financial data," according to an op-ed in the Washington Post.

Instead of relying on a vaccine to solve the coronavirus pandemic, he believes the best way to manage the virus is being proactive through careful tracing of infections as well as strict isolation measures whenever it starts spreading, the news organization reported.

TRUMP PREDICTS WHEN THERE MAY BE A VACCINE

He advised people to wear masks, wash hands, clean surfaces, and keep a distance to limit that spread.

Haseltine also gave his opinion on which countries have handled the coronavirus crisis the best since the outbreak began less than six months ago.

China, South Korea, and Taiwan have done the best at curbing infections, he said, according to the Guardian, while the U.S., Russia, and Brazil have done the worst.

He added that China and some other Asian countries have done a good job of closing off the infected from the public, according to the news organization. Meanwhile, he criticized the U.S. and other countries for not doing enough to “forcibly isolate” those exposed to the virus.