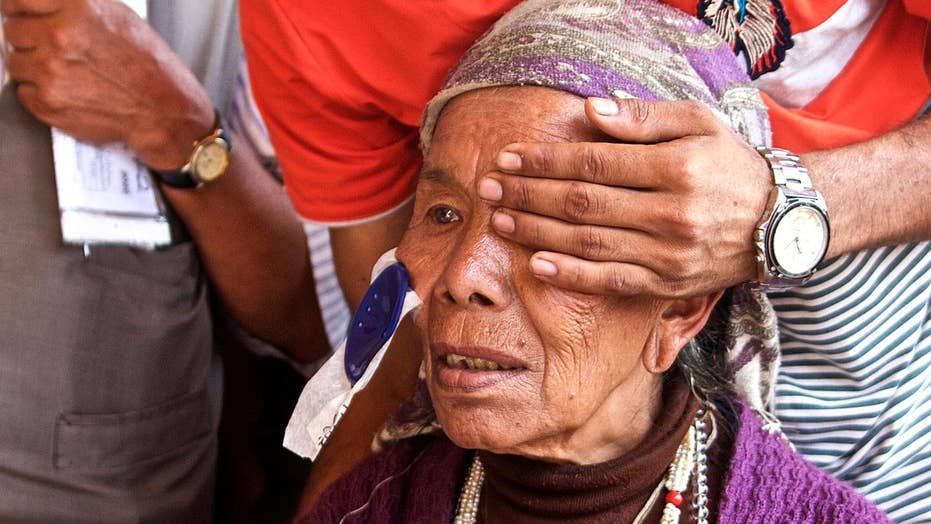 It takes remarkable drive and ambition for a young boy from the small east Nepalese village of Olangchungola with no running water or electricity to become one of the leading eye surgeons in Asia. Especially considering this village is a long four-day walk away from the nearest school. But after losing his 17-year-old sister to the tuberculosis, Ruit decided to focus on medicine to so other people’s lives aren’t destroyed by easily preventable and curable diseases.

In the Himalayas, like many other parts of the world, cataracts blindness is considered a natural part aging even though it’s completely preventable.

Dr. Geoffry Tabin is an ophthalmologist and close friend to Ruit. He told FoxNews.com, “cataracts is a clouding of the crystalline lens,” which is a “small lens that focuses light that sits just behind the pretty colored part of the eye called the iris.” In the western world, surgery can easily cure cataracts but those in the third world have to live with it and fall into blindness.

Typically, cataracts surgery involves removing the cloudy lens and replacing it with an artificial one called an intraocular lens. Ruit wanted to bring this procedure to the Himalayas. But, in order to do so the process had to be simplified and made more cost effective. His idea was to remove the expensive technology, make the process manual and somehow lower the cost of the intraocular lenses. To achieve this goal he created the Tilganga Eye Centre - now the Tilganga Institute of Ophthalmology - in 1994, in Kathmandu, Nepal.

“The cost of these intraocular lenses at that time was over 200 dollars and that was almost impossible to provide that to people at the community level,” Ruit told FoxNews.com. Ruit teamed up with ophthalmologist Dr. Fred Hollows to start making the lenses locally in Nepal. The approach worked. Within three years the costs per lens dropped dramatically to just three dollars.

With costs down and the simplification of the procedure, Ruit was able to provide over 100,000 cataract surgeries for just 25 dollars per procedure.

Using his efforts as groundwork, Ruit teamed up with Tabin to create the Himalayan Cataract Project whose aim is to focus on training and developing the infrastructure and techniques to end preventable blindness.

“We’ve been able to bring the amount of blindness in Nepal from 1 per hundred down to .28 percent,” Tabin said. Their efforts and spreading to other parts of Asia and even Africa.