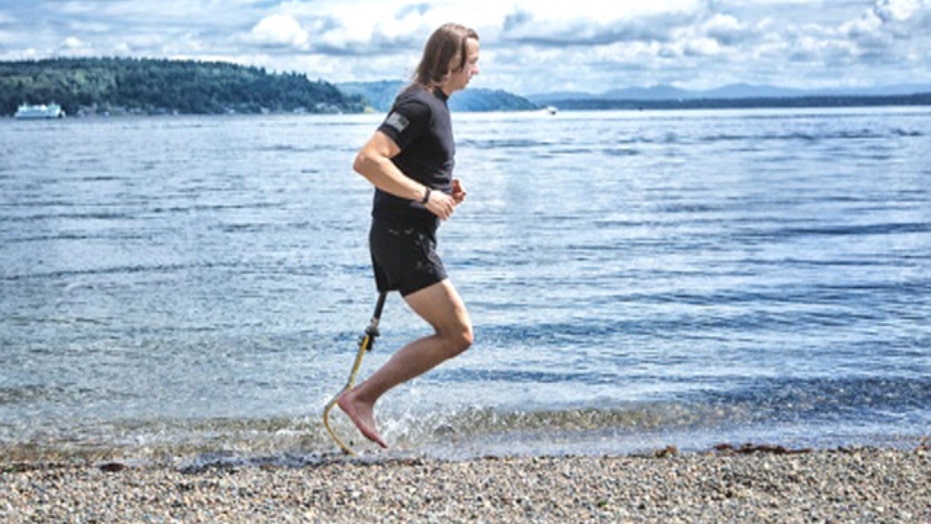 United States Army veteran Edward Lychik joined the military because he wanted to be part of something bigger than himself. But on his 21st birthday, while serving in Afghanistan as a combat engineer, he faced a horrific reality of war that prompted him to rethink his life mission entirely.

On Sept. 30, 2011, about a year into his deployment, Lychik was sitting in the gunner’s hatch of a tank when a rocket struck his vehicle. Lychik remembers feeling a dry thirst in his throat as black smoke engulfed the unit, seeing fire in the background, and reaching down to his left leg, which felt mushy on his fingertips.

“My friend immediately pulled it away and said, ‘You don’t want to do that,’” Lychik, now 24, told FoxNews.com. “They put me on a stretcher and in a vehicle, and that’s when I knew something was wrong.”

Lychik lost most of his left leg in the attack, which doctors later amputated above the knee. Gone were his knee joint, ankle joint and hip joint on that side of his body after undergoing a procedure called hip disarticulation. His medical team said the only way he would be able to walk again was with crutches and assistance.

In the days that followed, Lychik turned away visitors to his hospital room during what he called "a really low point" in his recovery. And although his nights were riddled with nightmares, one daydream kept Lychik’s spirit ignited during his darkest hours: A foggy spring night, a black hooded sweatshirt, and a bladed leg striking the pavement, propelling his body with each stride.

“I didn’t think much of it,” Lychik said. “I didn’t do much with it a whole year after that, but it was something and it made me feel good.”

Today, Lychik has proved his doctors— and even himself in the early hours after his injury— wrong. Today, Lychik doesn’t just walk. He runs.

As if by a dream come true, a custom-designed prosthetic leg with a curved blade and hip socket has enabled Lychik to finish four marathons, including the Boston Marathon in March, since his injury. On Sunday, he’ll run his fifth when he competes in the New York City Marathon.

Ryan Blanck, 41, clinical director of the Hanger Clinic in Gig Harbor, Wash., designed the one-of-a-kind technology. Blanck is a hero in his own right among the military community: His innovative Intrepid Dynamic Exoskeletal Orthosis (IDEO) technology has helped more than 600 servicemen and women return to active duty after suffering from leg injuries.

Blanck first met Lychik at the Center for the Intrepid, a U.S. Army medical center in San Antonio, Texas, where he sought treatment and a prosthetic leg for walking after his injury. Around the time Lychik left San Antonio for his hometown of Tacoma, Wash., Blanck was headed in the same direction.

By then, Lychik had a prosthetic leg and could walk, but he began to grow restless.

“I walked for about a whole year in Texas, and I felt that I could still do more and be more— and I felt like something was missing,” Lychik said.

When Lychik approached Blanck and his prosthetist, Bob Kuenzi, with the idea of a running leg, they sat on the idea for a while. In the prosthetics community at the time, hip disarticulation patients hardly walked, much less ran with a prosthetic leg. But Lychik persisted.

“Everyone realized that this guy had a special motivation,” Blanck told FoxNews.com. “He self-advocated and said, ‘You may think I’m crazy, but you want to take it in a stepwise process.’”

"You can create the most advanced technology possible," Blanck added, "but the patient then has to take that and use it— otherwise, it can kind of go nowhere."

Blanck’s team created the technology with a carbon fiber shell socket, which is lined with a custom urethane gel that reduces irritation around Lychik’s waist and torso. The socket attaches to the leg and blade as well as to a shoulder strap that lifts some of his body weight and reduces strain on his hip.

Lychik’s requests were specific: He wanted to run an eight- to nine-minute mile, and be able to tackle any terrain and any obstacle, including water. To meet those requirements, Lychik’s leg would need to bounce back fast enough after hitting the ground to propel his body forward.

“The first time [we tried the leg] was a disaster— because it didn’t work,” Lychik said. “We tried all these different parts. Oh, do I need a hip piece, do I need a strap? We thought about doing a straight-on pile down. He wanted me to go straight because it wasn’t going out and coming back fast enough.”

Lychik signed up for his first race— a Tough Mudder, a military-style running and obstacle course, in Austin, Texas— just a week and a half after putting on his new leg.

From there, his mindset switched.

“I went out there to prove something to myself: That I can get out there, that I can still do things— that I can do anything a normal person can do,” Lychik said. “But at the same time, there were all these people watching me, cheering me on, thanking me. That really switched everything in my mind around. Coming from a mindset of laying on a hospital bed thinking I lost everything— thinking, ‘Who’s going to like me? Who’s going accept me when I can’t even accept myself?’ I learned I can use this prosthetic leg to inspire people.”

Lychick speaks about his experience to veterans groups, elementary schools and in college classrooms, hoping to lift others people’s spirits when they may be facing hardship.

“I thought, ‘I can only run so much and do so many events,’” Lychik said. “I thought I could make a bigger impact. I wanted to inspire people and reach out to people.”

He said he aims to live his life like his role models: Tony Robbins, a renowned American life coach, and Terry Fox, a Canadian marathon runner whose right leg was amputated above the knee due to cancer.

Lychik is also part of Operation Enduring Warrior, a group for military veterans, and ran with them in the Spartan Race, an 11-hour climb up 7,000 feet of elevation. Racers wear gas masks to symbolize overcoming the odds.

Frank Jay Porcaro, 24, who shares a condo with Lychik outside of San Diego, Calif., trains with his roommate regularly. The two work out on their patio overlooking the Pacific Ocean, focusing on upper-body and core-strength exercises with kettle bells, strength bands and weights.

“He’s very organized and structured, and he also holds himself at a high standard,” Porcaro, who is a personal trainer and professional speaker, told FoxNews.com. “He does everything he talks about, and does those exercises when nobody’s there — and those things have really inspired me to be better.”

Lychik’s determination and inspirational spirit were not lost on the man responsible for helping him beat the odds— one of his prosthetists, Blanck.

“His goal in life is to encourage people to look at their situation differently,” Blanck said. “There’s not a lot of people that think that way, and that’s what motivates him. He wants to be in this race on Sunday and bring a smile to someone’s face, and see someone who woke up and had a crummy day, and says, ‘Look at this guy.’”

On Sunday, during the New York City Marathon, Lychik is hoping to finish in fewer than four hours. His best time is 4:07, which he hit at the Seattle Rock ‘n’ Roll Marathon in June.

“I’m fulfilled right now,” Lychik said. “I don’t think there’s ever a finish line. You run a marathon, you get a medal at the end but, you know, that medal is going to collect dust over the months and through time. All you’re going to remember is the 26 miles and the journey to the marathon. I love where I am now, but I don’t want to skip any parts.”