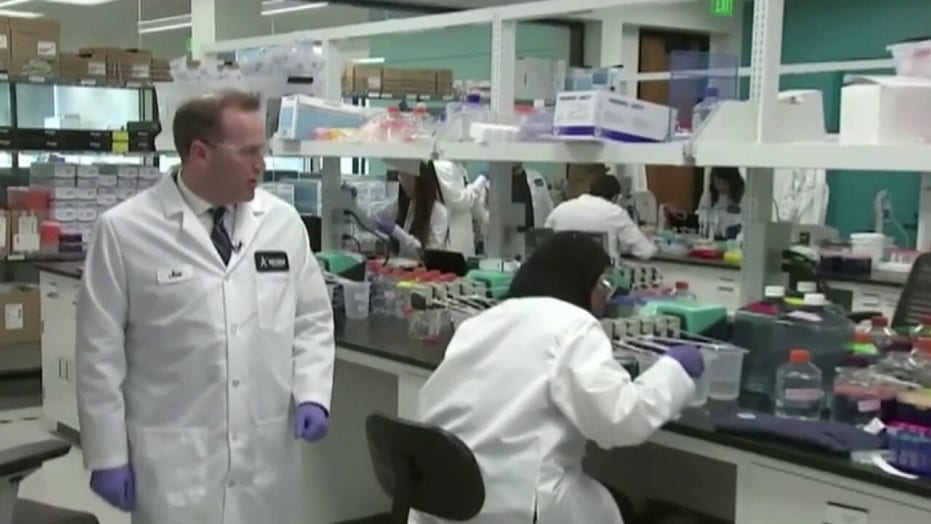 Dr. David Weiner, of the Wistar Institute, weighs in on ‘America’s Newsroom.’

IOWA CITY, Iowa (AP) — His mother first fell sick a month ago with an illness she believes she caught at the Iowa egg factory where she works.

His younger sister, 22, was next — a new mother who was soon on a ventilator fighting for her life. Then the coronavirus came for his father, Jose Gabriel Martinez, 58, who died Tuesday in the same hospital where he lived his final days near his unknowing daughter.

After a month of caring for his virus-stricken family, firefighter Omar Martinez is now planning a funeral for his father, who was a factory worker known for giving his all to provide for his family. He's hoping for the recovery of his sister Evelyn, who is alert after being taken off a ventilator Thursday. He's dreading having to tell her the news about their dad.

Omar, 29, said he's grateful that his mother has recovered and that he, two siblings and his 2-year-old niece have stayed healthy. He's also touched by the support they've received from neighbors in West Liberty, a heavily Hispanic city of 3,800 where his family settled after immigrating from Mexico in the 1990s.

Omar Martinez holds a photo of his father, Jose Gabriel Martinez, as he stands in front of their home, Saturday, April 25, 2020, in West Liberty, Iowa. Martinez's family had been living the American dream after immigrating from Mexico in the 1990s and settling in this small town in eastern Iowa, but their lives fell apart after coronavirus infections spread from his mother to his sister and his father. Now he is planning his father's funeral while hoping his sister recovers in a hospital intensive care unit. He is grateful his mother is better and appreciates the community's support. (AP Photo/Charlie Neibergall)

He wants people to know how easily the virus can spread if they infect others and how quickly that can devastate a family.

“All it takes is one person to be irresponsible to affect a family that doesn’t deserve it,” Omar Martinez said in an interview. “I don’t wish this upon anybody. I get asked every day how do I do it? I have no answers.”

The Martinez family's situation is illustrative of the startling racial and ethnic disparities among those getting infected and dying from the coronavirus.

While Latinos make up 6% of Iowa's population, they have accounted for more than 22% of its confirmed COVID-19 cases, according to the state Department of Public Health. The disparity widened as more testing was conducted on plant workers, who are disproportionately Latino and account for more than a quarter of Iowa's confirmed cases. State officials say more dense housing environments also play a role.

The virus has spread faster in Iowa, which now has more than 5,000 confirmed cases, than almost any other state in recent days. In West Liberty, a turkey processing factory that has long attracted immigrants to the area reported that 52 workers had tested positive.

Omar's parents met in their Mexican home town before moving to Dallas and then to West Liberty in the 1990s, when Omar was a child. His father, who went by his middle name Gabriel, became a U.S. citizen.

The family added two daughters and another son and became a staple of the community, taking part in school activities and attending the Catholic church. Omar worked with his father at a distribution warehouse before he joined the West Liberty Fire Department. Two years ago, Evelyn gave birth to a baby, Maia. Gabriel became a doting grandfather.

The family still lives together in the one-story home that Omar's parents purchased in the early 2000s for $45,000.

Aurelia Martinez, 52, had been a stay-at-home mother as the children grew up. She got a job after Hy-Line North America opened a large egg production plant in nearby Wilton in 2015.

In late March, Aurelia began feeling tired and sick and isolated herself in one of the bedrooms, Omar said. She tested positive for COVID-19 on April 3, suspecting that a sick coworker passed her the virus. A Hy-Line spokesman confirmed that's the date that the last of six Wilton factory workers tested positive.

Evelyn, a waitress, got the chills, body aches and a fever two days later. Soon, she started suffering from coughing spasms and was unable to sleep or eat. Omar gave her Tylenol and fluids.

The family persuaded Evelyn to go to Mercy Hospital in Iowa City on April 10 after her coughing got so bad that her face turned purple. That night, she was intubated and put on a ventilator.

“Her oxygen levels were low. If we would have waited a day she might not have made it,” Omar said.

The Martinez Family of West Liberty, Iowa is pictured in June 2019 in the town of Ignacio Allende, Mexico. The coronavirus has swept through the family in the last three weeks. Jose Gabriel Martinez, holding his granddaughter in the center of the photo, died on Tuesday, April 21, 2020, at age 58. Aurelia Martinez, second from right, tested positive on April 3 but has recovered. Their 22-year-old daughter Evelyn, bottom right, has been hospitalized since April 10. Evelyn's older brother, Omar Martinez, top left, says the experience has been devastating. (Martinez Family via AP)

The family patriarch, Gabriel, started showing symptoms two days later. By then, the Procter and Gamble factory where he worked had started making hand sanitizer because demand was surging.

Omar recalled sleeping on the floor of his father's bedroom and giving him Tylenol in the middle of the night. He took Gabriel to the hospital on April 15 when his cough worsened, holding his hand on the way and telling him everything would be okay.

That night would be his last conversation with his father, who had been healthy just days earlier. On a FaceTime call, Gabriel said the hospital was transferring him to the intensive care unit that was already housing Evelyn. His oldest son and wife told him they loved him. Soon, he was also on a ventilator.

Doctors said Gabriel made steady progress over the next few days and they began turning down the settings on his ventilator. But on Monday night, he started showing irregular heart rhythms. The family stayed up praying, but early Tuesday morning, they were told he had died.

“She had been very unstable while my dad was doing well. But when he passed, in those next 24 hours she was making big improvements,” Omar said.

On Thursday, doctors removed her from the ventilator and reported that she was awake and alert and asking to see her parents and daughter. They are cautiously optimistic that she may soon begin rehabilitation if her breathing keeps improving.

Neighbors have inundated the family with groceries and other offers of help. A local grocery store held a fundraiser for the family. Donors have given more than $23,000 to a GoFundMe account to cover funeral and health expenses.

Omar, choking up, said his father had been touched by the outpouring before his death.

"Seeing all the groceries, his face would light up with a smile," he said. “The little things like that brightened up his world.”

This article originally appeared on The Associated Press.