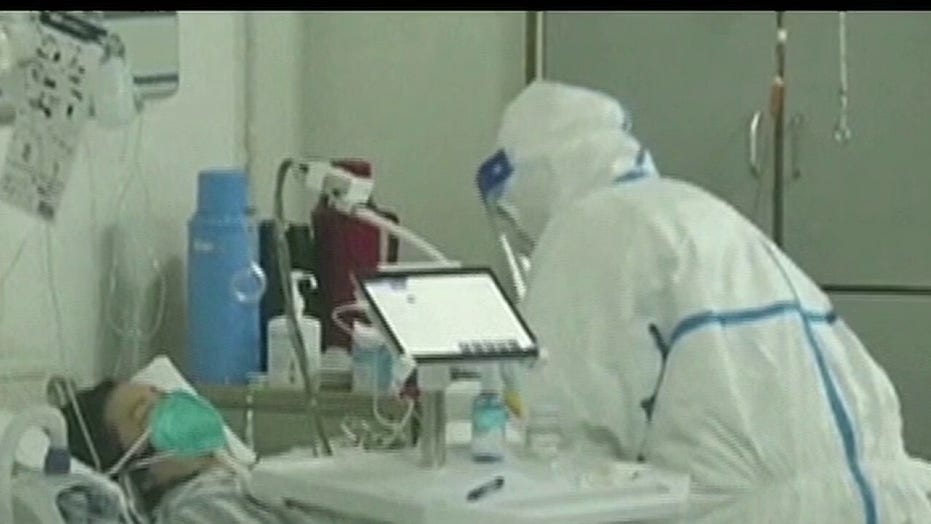 US coronavirus plan would evacuate some Americans from quarantined cruise ship

Hundreds of Americans quarantined on a cruise ship, for more than a week due to a coronavirus outbreak on board will have the chance to evacuate, the Centers for Disease Control and Prevention according to a report; Fox News medical contributor Dr. Marc Siegel weighs in.

Both State Department-chartered flights carrying Americans from the coronavirus-infected Diamond Princess cruise ship arrived in the U.S overnight. The first plane touched down at Travis Air Force Base in California just before 11:30 p.m. local time. The second flight landed at Lackland Air Force Base in Texas roughly 2 1/2 hours later.

Hundreds of American passengers who had been quarantined on the cruise ship left Japan Monday on two planes en route to the United States -- with 14 of the passengers infected and isolated in a "specialized containment area." It's not clear which flight the infected were on.

"During the evacuation process, after passengers had disembarked the ship and initiated transport to the airport, U.S. officials received notice that 14 passengers, who had been tested 2-3 days earlier, had tested positive for COVID-19. These individuals were moved in the most expeditious and safe manner to a specialized containment area on the evacuation aircraft to isolate them in accordance with standard protocols," the U.S. Department of State said in a release.

"After consultation with [Health and Human Services] HHS officials, including experts from the HHS Office of the Assistant Secretary for Preparedness and Response, the State Department made the decision to allow the 14 individuals, who were in isolation, separated from other passengers, and continued to be asymptomatic, to remain on the aircraft to complete the evacuation process," it added.

The 46 Americans who tested positive on the cruise ship were told to remain in Japan to be treated for the virus that has killed an estimated 1,765 people and infected more than 70,000 globally, according to Princess Cruise media relations. Buses had transported U.S passengers -- with the assistance of Japanese troops -- from the ship to Haneda Airport in Tokyo.

Health officials said they screened all passengers prior to boarding the flights and no symptomatic or infected travelers were allowed onboard.

So far, 355 people have tested positive for the virus on the Diamond Princess after doctors found 67 new cases Sunday.

An airplane chartered by the U.S. government taking off at Haneda Airport in Tokyo with U.S. passengers who were aboard the quarantined cruise ship. (Sadayuki Goto/Kyodo News via AP)

About 380 Americans and family members were on the ship when it was quarantined on Feb. 5. It's unclear exactly how many U.S. citizens have tested positive for the virus other than the 46 reportedly infected.

"All travelers on these flights were screened for symptoms prior to departure and will be subject to [the] Centers for Disease Control (CDC) screening, health observation, and monitoring requirements. Only those who were asymptomatic were allowed to board the flights," a State Department spokesperson said.

A bus carrying U.S. passengers who were aboard the quarantined cruise ship the Diamond Princess arriving at Haneda Airport in Tokyo. (Sadayuki Goto/Kyodo News via AP)

The bases in California and Texas were selected to ensure facilities were available immediately to treat their medical needs, according to the U.S. Embassy in Toyko.

Buses carrying U.S. passengers who were aboard the quarantined cruise ship the Diamond Princess, seen in the background. (Jun Hirata/Kyodo News via AP)

The chartered flights were the only opportunities for passengers to fly to the U.S until March 4, embassy officials said. The remaining passengers are expected to depart the ship this coming Wednesday.