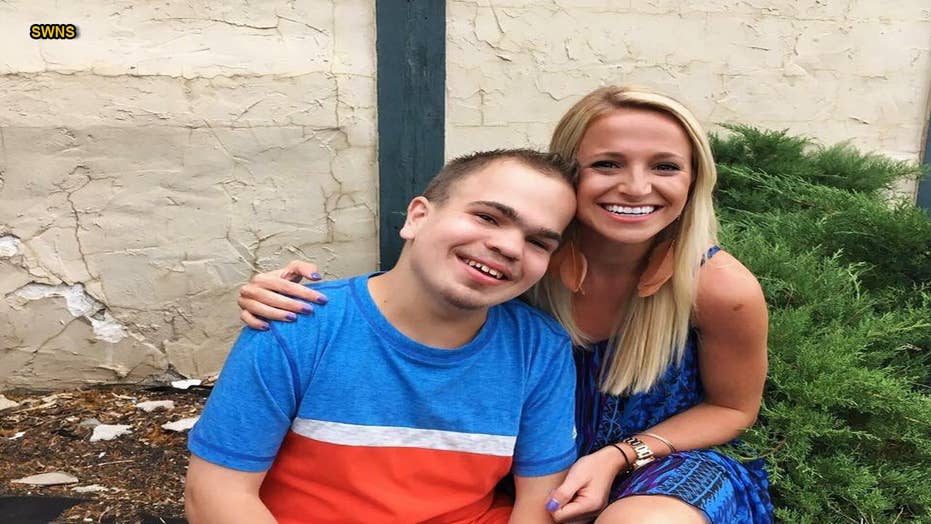 Levi Ormeroid, 19, can no longer talk or belt out the words to his favorite songs. The teenager was diagnosed with Sanfilippo syndrome, a rare genetic disorder which causes brain damage and is dubbed 'childhood Alzheimer’s' because of its similarity to the degenerative disease that typically affects the elderly.

A mother is giving voice to an incurable condition that has caused brain damage to her son. Christi Ormeroid is speaking out about her heartbreaking journey with her son’s illness, Sanfilippo Syndrome. The rare genetic condition is caused by an enzyme deficiency that effects 1 in 70,000 children in the United States, according to the U.S Library of Medicine.

The 43-year-old mother told SWNS how her son Levi, now 19, started deteriorating when he was a toddler. "By the time he was 4, he had started losing his words slowly and was down to two-word sentences,” she said.

Christi Ormeroid told SWNS how her son Levi, now 19, started deteriorating when he was a toddler, "By the time he was four he had started losing his words slowly and was down to two-word sentences.” (© Christi Ormeroid / SWNS.com)

Between the ages of 8 and 17, Levi forgot how to dress himself, hold a pencil, eat solids and how to speak. Now, at 19, he has the mental age of an 18-month-old.

The mother from Milwaukee explained, "It is like Alzheimer's. It is like everything is there in his mind but it just won't come out — he can't express himself.”

Christi described her son’s decline, "Everybody said, 'He's a boy, they learn slower than girls.' She said she would doubt herself, "I would tell myself I was overreacting, but then the next day it was like, 'Something isn't right.'

Between the ages of eight and 17, Levi forgot how to dress himself, hold a pencil, eat solids, and how to speak. Now, at 19, he is the mental age of an 18 month old. (© Christi Ormeroid / SWNS.com)

Christi remembers when Levi was diagnosed with Sanfilippo Syndrome at age 10. "I just remember I started crying and was in my own little world. It was like a dream and I couldn't wake up.”

According to the National Library of Medicine, Sanfilippo Syndrome is caused by a deficiency in certain enzymes that are supposed to break down long chains of sugar molecules.

As a result, the molecules build up in different parts of the body and cause severe intellectual disability. Most people live into their teenage years, while others with severe forms of the disease die at an earlier age.

Christi told SWNS, "Everything you wish your kid could do is gone. It was like being stabbed in the heart.” She added, "Levi’s favorite song is Jessie’s Girl, by Rick Springfield. He would sing along and just be so happy.”

But the disease has prevented Levi from singing, she said. "Now when he hears the song he still lights up and you can see the spark in his eyes but he is unable to sing along.”

There is still no cure for this disease, but the family is trying to help raise awareness.

Levi’s 23-year-old sister, Logan, plans to climb to the top of Pico de Orizaba, a stratovolcano in Mexico, to raise $100,000 for research.