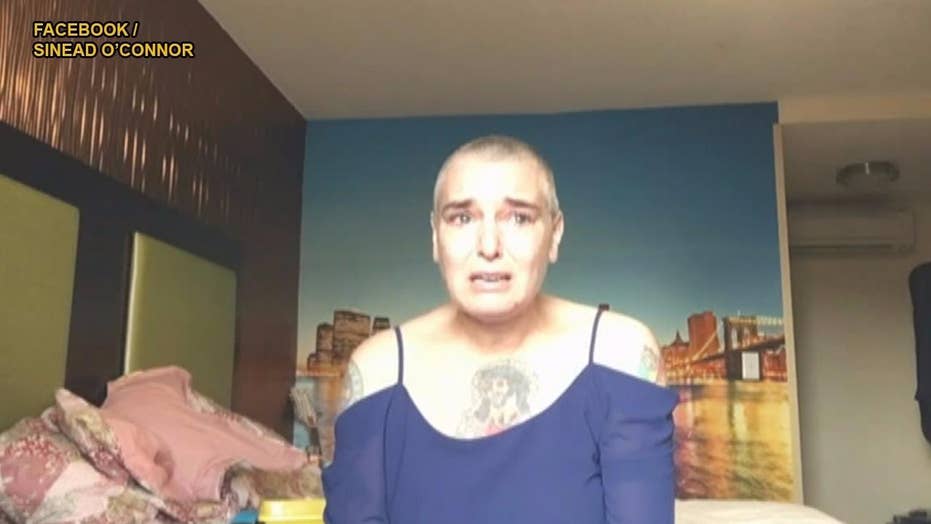 Fox411: Troubled singer Sinead O'Connor has posted an online video saying she's suicidal - and living in a motel 'in the arse end of New Jersey'

Justin Bieber made news last week for canceling the remainder of his world tour so he could heal his “mind, heart, and soul.” The media and some celebrities have portrayed the announcement as a disappointment to his fans. But by opening up about his struggles and his choice to step back from the spotlight, the singer can inspire more honest and accepting discussions about mental health issues and coping strategies among his fans.

This isn’t the first time that Bieber has opened up about mental health issues. He described to GQ last year that trouble sleeping led him to take Adderall, a stimulant, to concentrate on the daily demands of his work. For musicians, touring can be psychologically demanding. Bieber is not the first to disclose these challenges and take a break.

That’s what Sinead O’Connor aimed to accomplish last week in a tearful Facebook post, in which she opened up about her mental illnesses. “The stigma doesn’t give a sh*t who you are … I’m one of millions,” she said.

This “celebrity effect” may be especially true for adolescents, who may be more influenced by these media figures.

Bieber’s announcement made me think of a teen in Northern Canada I had interviewed for a story on youth mental health. When I asked about who inspired her, she quickly named Kendall Jenner, a social media celebrity and supermodel a few years older than her. Describing the things they had in common, like their height and hair color, the teen also mentioned their shared mental health challenges. “Another thing I have in common with Kendall is that she talks about her anxiety, and I have anxiety too.” Perhaps Jenner’s openness about her anxiety made it less shameful for others to talk about.

Data from the National Institute of Mental Health indicate that 12.5 percent of adolescents aged 12 to 17 had at least one major depressive episode in 2015. The NIMH also found that 25 percent of teens aged 13 to 18 had a lifetime prevalence of anxiety or an anxiety-related disorder; with 5.9 percent classified as severe. Suicide is the second leading cause of death — behind accidental death — among 15-to-19-year-olds. What’s perplexing about adolescent mental health these days is that despite increased connectivity through social media and other internet-based services, many young people may be more isolated than ever.

There are ethical rules around what psychiatrists and other health care professionals can and cannot discuss about celebrity mental health. But if celebrities are themselves open with both their mental health struggles and their coping strategies, they may positively affect fans dealing with similar issues.

Take, for example, Bollywood star Deepika Padukone. In 2015, she went public about her struggles with depression in an interview with a popular Indian television network. During the conversation, she also tried to educate the public about depression symptoms and explain her strategies for dealing with them, which included medical treatment.

Researchers from Ohio University and the Surendranath College for Women published findings last week about how Padukone’s interview may have influenced her fans to both see mental illness as less stigmatizing and seek mental health care if they, too, have symptoms. A few years earlier, Austrian researchers found that media coverage of depressed individuals who had had suicidal thoughts but who endorsed positive coping strategies could have protective effects among the general public.

No one knows for certain why celebrities can be influential in health messaging. The predominant theory suggests they have an inherent persuasive control among the general public. That can be worrisome when this messaging isn’t derived from personal experience with a health issue, but instead crosses into marketing where a celebrity stands to gain a sizable profit — the example of Goop recently discussed in First Opinion is a staggering example.

Read more: ‘13 Reasons Why’ might have triggered suicide searches online

McMaster University’s Steven Hoffman and Charlie Tan have examined several theories behind celebrity influence for health messaging. In a 2013 study, they proposed a multilayered framework consisting of economic, marketing, psychological, and sociological factors by which celebrities leverage their fame to persuade the public toward or away from health-seeking behaviors. They proposed that celebrity influence has the potential to be used for good when it comes to health messaging, and Hoffman recently proposed a systematic review to further look into the impact of celebrities on health-related knowledge, attitude, and behaviors.

Of course, revelations of celebrities’ mental health issues can also be harmful, especially when suicide is involved. That sometimes triggers copycat suicides, or what has long been dubbed the “Werther Effect,” after “The Sorrows of Young Werther,” a 1774 novel by Johann Wolfgang von Goethe. “13 Reasons Why,” a recent Netflix series based on a 2007 teen novel, has turned attention to the influence of the media on suicide. A new JAMA study recently showed that airing the series was associated with a significant increase in internet queries about ways to commit suicide.

Leveraging fame for good — in this case, disclosing that he was dealing with challenges to his mental health and offering a possibly effective coping strategy (time away to heal) — may have been exactly what Bieber hoped to do. For his fans, many of whom fall within the demographic most likely to experience anxiety or depression, this is a welcome and inspiring message, and it should be supported and encouraged. Doing otherwise perpetuates both the stigma of mental illness and the view that one’s vocational demands should be held above one’s well-being.

Amitha Kalaichandran, M.D., is a resident physician in pediatrics and a health/medical journalist.