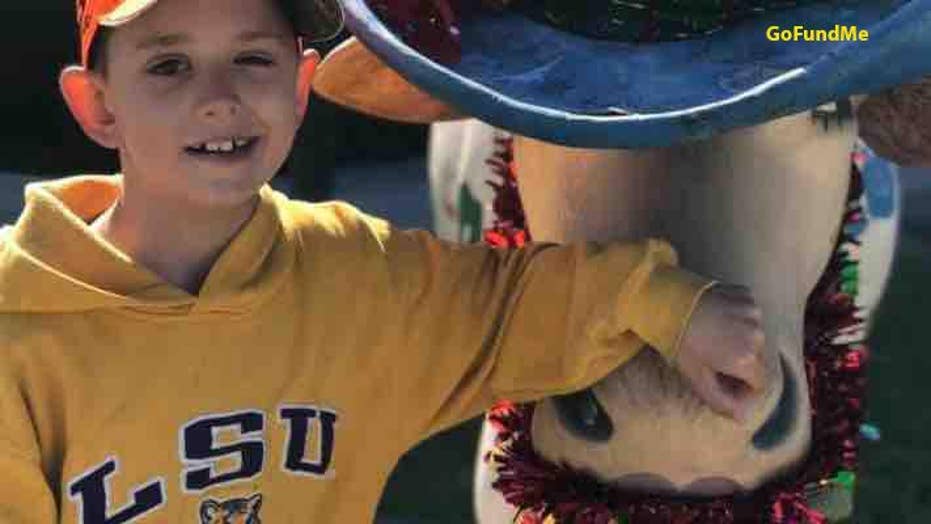 8-year-old Drake Wuibodeaux, from Louisiana, was diagnosed with diffuse intrinsic pontine glioma, a terminal brain tumor nine months ago. To make this Christmas memorable for Drake and his family, a family friend took to Facebook to ask members of the community to send him a Christmas card and now the young boy has received thousands from all over the country.

An 8-year-old boy’s mailbox has been filled with Christmas letters, including one from the White House, after a push for holiday cheer went viral. Drake Quibodeaux, from Louisiana, was diagnosed with Diffuse Intrinsic Pontine Glioma (DIPG), a terminal brain tumor, nine months ago, WAFB.com reported.

DIPG is a highly aggressive and difficult to treat brain tumor typically found at the base of the brain. According to the Dana-Farber Boston Children’s Cancer and Blood Disorders Center, DIPG accounts for 10 percent of all childhood central nervous system tumors, with approximately 300 diagnoses each year. It typically strikes in children ages 5 through 9, although it can occur at any age.

According to the center, complete surgical removal of the tumor is not an option, and each treatment plan is dependent on the child but can include experimental chemotherapy and radiation therapy. Prognosis for patients remains poor.

“Last week, we got the news that his tumor was growing,” Danielle Quibodeaux, the boy’s mother, told WAFB earlier this month. “At the start, they give you nine to 12 months. And on the 12th of this month, it’ll be nine months.”

To make this Christmas memorable for Drake and his family, a family friend took to Facebook to ask members of the community to send him a Christmas card.

“Please mail a Christmas card to Drake (8yrs old)! He was diagnosed with a terminal brain tumor (DIPG) in March of this year, and I’d love to flood him with cards this Christmas to show him how many people are praying for him and supporting him through this journey!” Jennifer Virgadamo Duhon posted on Nov. 30.

He’s since received thousands, and additional efforts to send him to the Fiesta Bowl to watch his beloved LSU Tigers take on UCF, and another to send him to Disney. The Fiesta Bowl campaign caught the attention of game organizers, and he was given a free trip to Arizona so he can be present for the New Year's Day game. He also wished to hunt a deer and was successful.

“It’s not about presents, it’s not about nothing,” Quibodeaux said of the cards her family has received. “It’s about letting him know the community loves him and they’re behind him.”