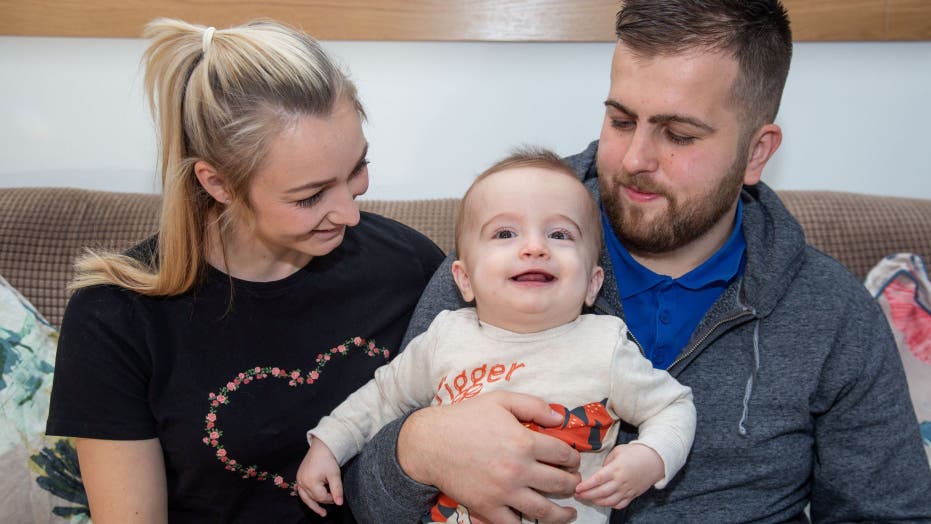 A 1-year-old boy in the United Kingdom will soon make a trip to the United States for life-saving surgery to remove a tumor on his heart.

Come March, Emma and Stuart Labuschagne, along with their son, Michael, will travel to Boston so the young boy can undergo surgery at Boston Children’s Hospital. When their story first came to light in October, the Labuschagnes were told their son would receive the best care at the hospital. But the young family was concerned with the costs, as the expensive procedure is reportedly expected to set them back nearly $150,000.

BABY BORN WITH RARE HEART TUMOR TO SEEK SURGERY IN US: 'EVERY DAY IS AN UNKNOWN,' MOM SAYS

After setting up a fundraiser on the crowd-funding site GoFundMe, the family got what they needed and more: About $260,000 of their roughly $150,000 goal was met.

Michael, who has a fibroma on his heart, will undergo surgery on March 12, according to the fundraiser.

Michael Labuschagne with his mom Emma and dad Stuart. (SWNS)

“He will have a week of appointments for scans and testing, then the major operation to remove the tumor should happen on the 12th [of] March,” reads the fundraiser. "This is [the] best time for the procedure in terms of his size and recovery.”

When Michael was just 14 weeks old, he suffered from heart failure in the middle of the night. The parents of what they thought was a perfectly healthy baby boy were in shock as paramedics worked to save their child’s life.

Michael Labuschagne when he was in the hospital. (SWNS)

"Words cannot begin to describe the pain we felt [at] that moment,” Emma told South West News Service (SWNS), a British news agency, at the time.

Michael, who then was diagnosed with a cardiac fibroma, was placed in a medically induced coma. When he woke, the first thing he did was smile at his father, Emma previously said.

The family plans to bring their son to Boston in March for the surgery. (SWNS)

Fibromas, the type of tumor on Michael’s heart, is the second most common type of cardiac tumors in children. About 14 percent of pediatric heart tumors are fibromas, according to Boston Children’s Hospital. These tumors are most often located in the heart’s ventricles — namely and most commonly in the left one — and can obstruct blood flow to the heart, which can cause valvular malfunctions and ultimately lead to heart failure.

Fibromas “are often associated with arrhythmias and ventricular tachycardia,” per the hospital. Surgery is often recommended to remove the tumor, but in some cases — especially for large or non-removable tumors — a heart transplant may be required, according to Science Direct.

For now, Michal is doing “incredibly well,” according to the fundraiser.

“He is generally happy and content, and continuing to show his undeterrable strength. He is meeting milestones and has just celebrated his 1st birthday!” it reads. “We want to take a moment to thank you all again for your kindness and generosity. This Christmas could have been so different for us and we will be forever grateful that we have this time with our family.”