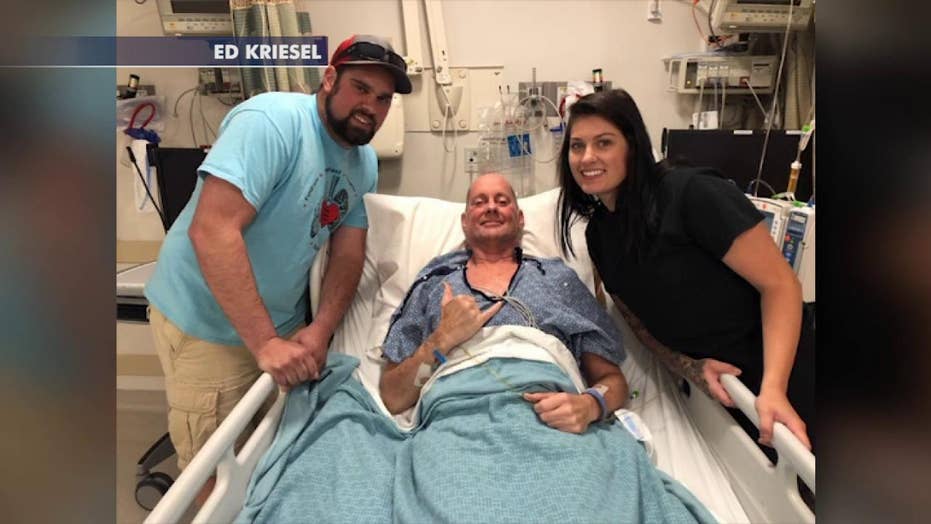 Ed Kriesel survived Alpha-1 antitrypsin deficiency, which took both of his lungs.

An Arizona man survived a rare liver disease and is sharing his story in hopes of bolstering awareness.

Alpha-1 is a genetic disorder that affects the lungs, liver and skin, according to the American Lung Association.

He underwent a double lung transplant about three months ago; before the transplant, Kriesel’s lungs were working at 20 percent capacity, the television station reported.

He told the station it took a long time for him to be diagnosed because the disease is often misidentified as a form of asthma.

The most common symptoms of Alpha-1 are shortness of breath, wheezing, chronic bronchitis and year-round allergies, according to the Alpha-1 Foundation.

Kriesel told the station that in 2007 he had trouble breathing, and his doctor could not figure out why.  "He kept giving me antibiotic after antibiotic, thinking I had a virus," Kriesel said.

He eventually went to a specialist and a year later was diagnosed with Alpha-1.

"So I didn't have any protection for my lungs so my lungs continued to die off," Kriesel said.

About one in every 2,500 Americans has Alpha-1, according to the Alpha-1 Foundation. The disease reportedly takes an average of five years to diagnose because of its rarity.

"There’s an estimated 26 million people in the country that have this that don't know it," Kriesel said.

After he was diagnosed he received plasma treatments for years to sustain his lungs, but he reportedly almost succumbed to the disease.

He told Fox 10 he wouldn't be alive if it weren't for his organ donors, adding that after his double lung transplant he can do things he couldn’t do before.  "Just simple things around the house, making a bed,” Kriesel said.   “I can make my bed without having to stop to rest, just real small, basic stuff that people take for granted."

Kriesel currently takes 28 medications a day. He told the station his lungs are now at 98 percent efficiency.