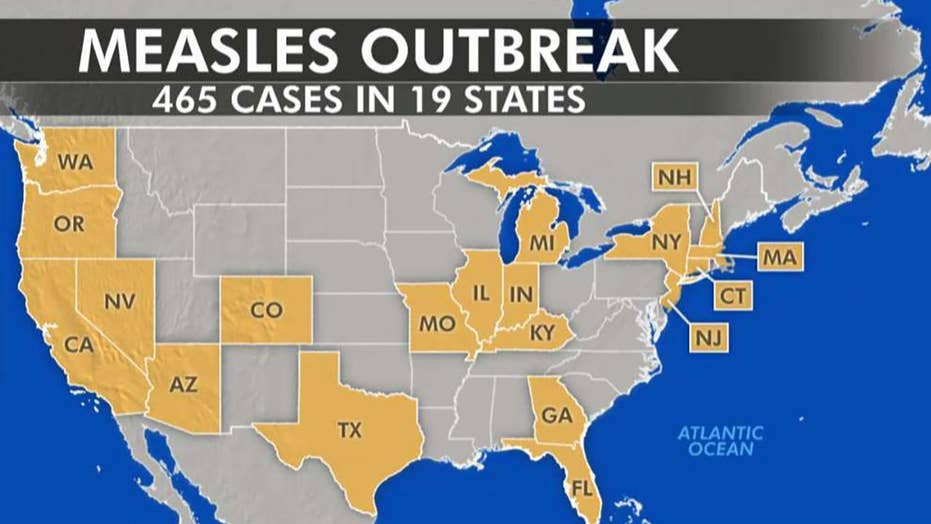 Fox News medical contributor Dr. Marc Siegel on what parents can do to protect their children.

Twitter was quick to slam a woman wearing an anti-vaccination T-shirt.

An account called “Christian Nightmares” on the social media platform shared a photo of a woman wearing a shirt that reads, “Spoiler Alert...Jesus Wasn’t Vaccinated.”

The tweet, which had more than 200 likes as of Wednesday morning, quickly garnered comments from Twitter users who seemingly were against what the woman appears to stand for.

“Spoiler alert: Jesus was born to a virgin, turned water into wine, walked on water, and came back from the dead. New rule: if you can do those things, you don’t need to be vaccinated,” one person quipped.

“Neither was Satan,” read another response.

“And if he hadn't been nailed to a cross, his life expectancy would've been about 40 years because diseases were rampant. But, lo and behold, once vaccinations were invented, people lived longer... because [of] science. Ignorance is not a cure-all,” responded another.

“I genuinely don’t understand the message this is trying to portray,” said a fourth.

“To be fair, he was the son of God. So maybe vaccinate your kids unless the baby daddy is God,” joked one Twitter user.

Speaking to Fox News, Heather, the woman in the photo, said she wore the shirt "in response to the antisemitism occurring in New York following the confirmed cases of measles in the ultra-orthodox Jewish community." Heather, who claims she works as a nurse, asked to be identified only by her first name over fears of retaliation against herself and her children.

"The message of the shirt was never meant to be a statement on why someone should or shouldn’t vaccinate, but rather a tongue in cheek reminder that Jesus, another Orthodox Jew, was not vaccinated either. Would we find it acceptable to treat him in the same manner?" Heather said, referring to a May report from The Atlantic that detailed a rise in antisemitism following the spread of measles in Orthodox Jewish communities specifically in New York.

"Society has deemed it acceptable to abolish the first amendment rights of an entire community of Americans because they choose to decline the administration of a pharmaceutical product," she said, adding healthy individuals in New York were reportedly "banned from going to synagogue over Passover, attending school or leaving their homes" because, Heather said, "their religious convictions prevented them from accepting a vaccine" for what she called a "benign childhood illness."

"Vaccine mandates violate our right to physical autonomy, informed consent, and religious freedom. As long as there is risk, there must be choice, and that choice must be ours to make without fear of intimidation or discrimination," she said of her anti-vaccination beliefs.

The news comes after a California mother in April went viral when she posted heartbreaking photos of her infant suffering from a head-to-toe rash in an effort to urge others to get their children vaccinated. Sara Blum’s son, Walter, who was 5 months old at the time, had contracted the measles. Blum said her son's traumatic illness could have been avoided if more people trusted physicians.

“This would have been 100% preventable if people would just trust doctors and science, and vaccinate their children rather than going off of their own opinions and doing their research through Facebook,” she wrote at the time. “Because of them, my little boy had to get measles and suffer. Luckily there were no major complications and he is doing okay, but it could have easily been a different turnout. He is only 5 months old and didn’t even have a chance to get vaccinated.”

The Centers for Disease Control and Prevention (CDC) recommends children get two doses of the MMR vaccination, but the first dose is typically given between 12- and 15-months of age, with the second occurring between ages 4 and 6.