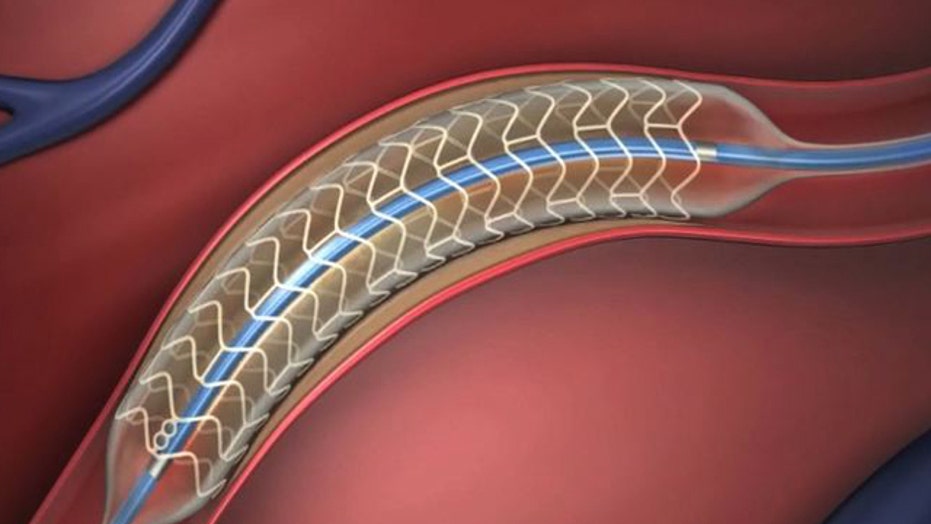 Cardiac stents have been used for almost 20 years to clear blocked arteries but once the stent does its job a metal scaffold is left behind. A clinical trial is underway to test a new type of stent that is completely dissolvable

Abbott's Absorb dissolving heart stent proved as safe and effective one year after being placed in a diseased artery as the company's market-leading Xience drug coated metal stent with a significantly lower rate of chest pain, according to data presented at a medical meeting on Sunday.

Absorb works in the same way as traditional heart stents, propping open arteries that have been cleared of blockages to restore normal blood flow. But unlike metal stents that remain permanently in place, Absorb softens over several months and dissolves in two to three years, allowing the treated artery to regain more normal flexibility to expand and contract.

In the 501-patient study called Absorb II - the first randomized head-to-head trial using Absorb - the stent technology was found to be as good as, or non-inferior to, Xience, researchers said.

The most notable difference observed after one year in the European study was the rate of angina, a type of chest pain associated with diminished blood flow to the heart. Angina can add to healthcare costs, requiring repeat doctor or hospital visits and the use of more diagnostic testing. It can also hamper patient activity.

Over the course of the year, the rate of angina in patients who received Absorb was 16.4 percent versus 25.6 percent for Xience patients, which was viewed as statistically significant.

"The lower rate of chest pain observed in people treated with Absorb is a promising finding that shows that Absorb may offer people unique quality of life benefits beyond the excellent clinical outcomes already offered with drug eluting stents," Dr. Patrick Serruys, the study's lead investigator who presented the data at the Transcatheter Cardiovascular Therapeutics (TCT) meeting in Washington, said in a statement.

The rate of definite or probable stent thrombosis - a blood clot forming at the site of the stent - was 0.9 percent for the dissolving device, researchers reported.

Absorb is approved in Europe, but Abbott said it believes many doctors were waiting for data from a randomized trial to ensure confidence in the device, which had been previously tested in single arm studies.

"We wanted to put it head-to-head against what is considered best in class technology," John Capek, Abbott's head of medical devices said, referring to the company's Xience stent.

A similar U.S. trial involving more than 2,200 patients will be the basis of the company's application seeking approval with the Food and Drug Administration expected to be filed in the second half of 2015, Abbott said.