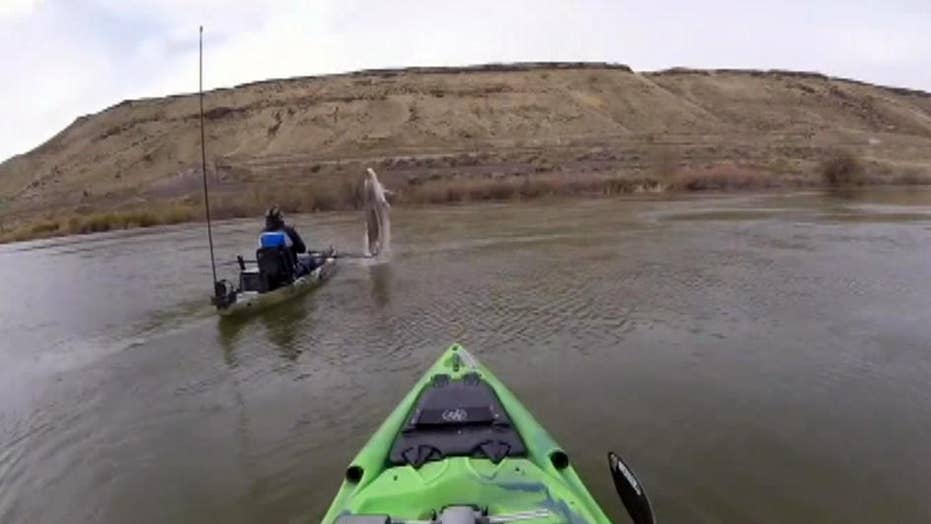 Steve Carroll of Caldwell and Bryce Thompson of Twin Falls were fishing on Snake River last Saturday when the duo caught the fish.

The sturgeon took nearly an hour to reel in, Carroll, 32, told Fox News on Friday. Once they landed the fish, the men measured the sturgeon and determined it was 8-feet long and 3-and-a-half feet around. That’s significantly larger than the average sturgeon, which typically measures 6-and-a-half feet long, according to the National Wildlife Federation.

“It was an awesome experience,” Carroll said, adding that this particular stugeron was the biggest one he's landed to-date.

The moment was especially exciting for Thompson, Carroll said, as Saturday was his first time fishing for sturgeon from a kayak.

After viewing his YouTube channel, Thompson reached out to Carroll to learn how to fish for stugeron using this method, opposed to standing on a river bank. Carroll was more than happy to teach Thompson because “igniting the passion in other people,” is one of his favorite aspects of the sport, he said.

After taking measurements, the two released the fish back into the water (it is illegal in Idaho to take a sturgeon out of the water, Carroll said).

Next time, Carroll said he hopes to catch a 10-foot sturgeon he's been chasing after in the same area.

"It’s a huge draw for me; it’s a passion of mine to get out and explore the waters,” he said.