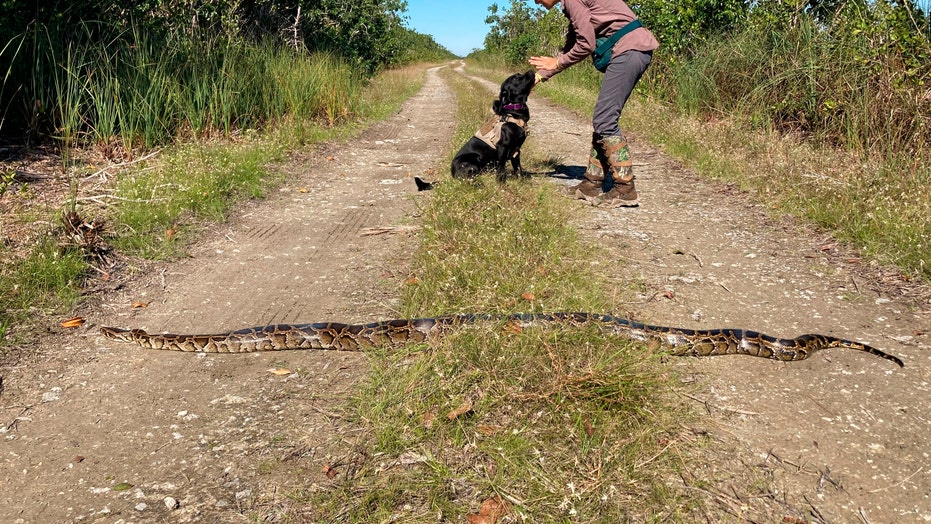 Florida is turning to the dogs to help solve its Burmese python problem.

The Florida Fish and Wildlife Conservation Commission (FWC) has been training dogs to track down pythons for more than a month. Last week, one of the dogs had its first successful find.

"We've got to stay innovative," Eric Sutton, FWC’s executive director, said Wednesday, according to The Associated Press. "We've got to try new approaches and the detector dogs is just one area where we're doing that."

The FWC has been using python-scented towels and pythons with implanted trackers to train Truman and another dog named Eleanor to sniff out the snakes.

Truman sits near an area where he tracked down an 8-foot-python, Tuesday, Dec. 8, 2020, in Miami-Dade County, Florida. (Florida Fish and Wildlife Conservation Commission via AP)

The dogs are trained to alert their handlers when they find a python and to stay 3 feet away from the snakes since they’ve been known to eat small alligators and small deer.

Pythons are considered a threat to the Florida Everglades because they disrupt the natural balance of predator and prey by eating native mammals and birds. The snakes also don’t have their own predators in the Everglades, so they’re able to easily reproduce.

The FWC has been working hard to eradicate the invasive species, but the task has been challenging.

In the last four years, about 6,300 pythons have been captured by snake hunters hired by the state, Sutton said Wednesday.