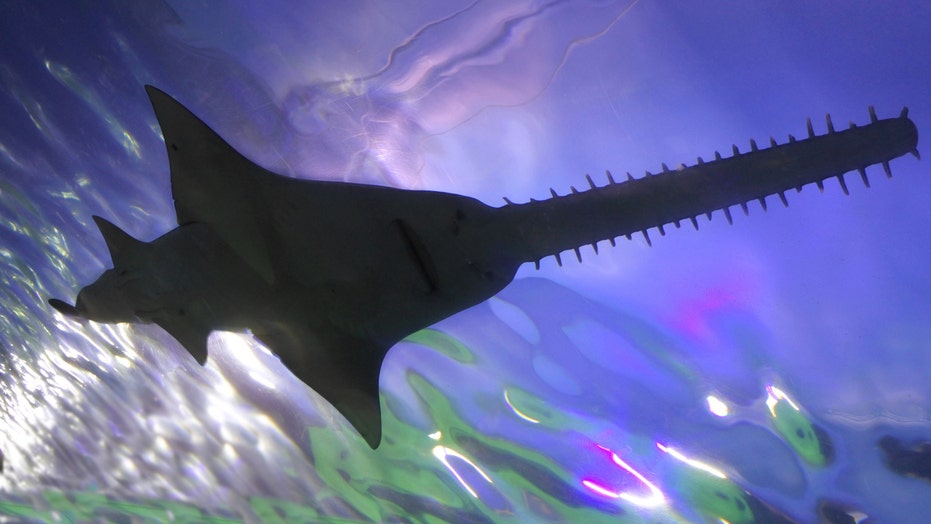 A man in Florida has been sentenced to two years’ probation, a $2,000 fine and 80 hours of community service after pleading guilty to sawing off the snout-like protrusion — also known as the rostrum — of a live endangered sawfish, before throwing it back in the sea.

SEE IT: AVID FISHERMAN'S FAMILY HONORS MEMORY BY PUTTING HIS CASKET IN HIS BOAT

Chad Ponce, a 38-year-old commercial fisherman, was first reported to the Florida Fish and Wildlife Conservation Commission (FWC) in July 2018 by another fisherman who witnessed the incident, the National Oceanic and Atmospheric Administration (NOAA) said in a news release issued last week.

A photo released by the Florida Fish and Wildlife Conservation Commission (FWC) shows an example of a sawfish getting caught in a trawling net on a commercial fishing vessel. (FWC)

According to the NOAA, Ponce had caught a roughly14-foot smalltooth sawfish in his shrimp-trawling net on July 18, off the coast of Ponte Vedra, Fla. After bringing it on board, he attempted to saw off its rostrum with a hacksaw, before abandoning the idea and grabbing a power saw. He then dumped the mutilated sawfish back into the ocean.

The smalltooth sawfish, which is identified by a rostrum lined with sharp teeth resembling a saw, is said to be dependent on its protruding nose for swimming, direction and locating prey.

The NOAA released this illustrative photo of a sawfish which had suffered the loss of its rostrum in the Florida Keys. (NOAA)

The NOAA and FWC launched an investigation the same day the incident was reported. Ponce initially denied any wrongdoing, but eventually pleaded guilty to killing the endangered sawfish during a court appearance in Nov. 2019.

The smalltooth sawfish, which is identified by a rostrum lined with sharp teeth resembling a saw, is said to be dependent on its protruding nose for swimming, direction and locating prey. (iStock)

“Under the ESA, it is illegal to catch, harm, harass, or kill an endangered sawfish,” the NOAA added, noting an exception for any caught unintentionally while fishing for other species.